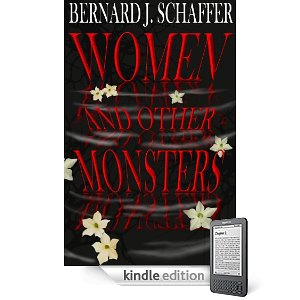 Women and Other Monsters

"You will peel through it, just to see if the next one can possibly be better than the last...flawless."
—The Book Nook Club

"A pleasure to read, but scary."
—Book Blogs

"This is a rare craft indeed.  His style puts him in the echelon of some of the best appreciated authors out there."
—Haresh Daswani, author of Evolution of Insanity

“The Reluctant Death” is the story of a woman during pre-Civil War times who becomes the object of interest for a supernatural being that will not allow her to die.

("Folklore, mysticism and darkness rule here, but there is still a hidden gentleness that emerges.  I found this one to be beautiful and mysterious."—The Book Nook Club)

("I was drawn in by beautiful prose that read more like poetry, rich with symbolism and a sense of Irish/French history. Excellent."—Amy Blackwelder, author of Shifters 2040)

In “Codename: Omega,” a secret agent is sent to destroy the Nazi’s experimental weapon development facility, where SS stormtroopers and black magicians await.

“Room Service” tells of what happens when a vampire takes a victim and her nothing-to-lose boyfriend decides to do something about it.

("This grabbed my from the first line."—Ami Blackwelder, author of Shifters 2040)

("With all these good-guy-vampire books out now, it's refreshing to read the opposite."—The Book Nook Club)

“Cold Comforts” is a grim tale of disturbing revenge carried out by a jealous wife that will have readers squirming in their seats.

“Nazareth” is the story of two alien researchers who discover the human species and conduct an experiment that has history-altering effects.

("This story will take you by surprise, you will also find yourself taken by Schaffer's cleverness and satirical humor."—The Book Nook Club)

The collection ends with a revealing personal essay titled, “Digestif.”

("What was an extra bonus was reading "Digestif" at the end... totally different from the short stories."—Customer Review, Barnes and Noble)\

Technical Sergeant James Scott stepped on the head of a wounded German soldier and used it to launch himself up the wall of the trench.  Someone shouted, “Go, go, go!  We’ve taken their front line!”  Mortar bombardments sent clumps of dirt flying into his face.  Scott pulled himself up onto the traverse and a German bullet went through his right shoulder.

It dropped him to his chest but he stayed in the fight, peering through the thick smoke, trying to see how far he was from the next trench.  Deciding he’d find it eventually if he crawled long enough, he started forward and a bullet dented the brim of his helmet, sending blood and hot metal into his eyes.  German rifles cracked across the trench and bullets slammed his torso.  Scott gasped and it felt like bubbles were inside his lungs.  He found the lip of the next trench and rolled over it headfirst down the wall.

Allied soldiers poured over the ledge and landed on his dead body, crushing him with their boots as they stampeded through the trench in the panic of battle.  He was twenty-three years old.

Medical personnel evacuated the dead from the trenches at night.  Scott’s bullet-ridden corpse was placed on a covered Army transport and driven inside a converted airplane hanger in Bellicourt. The bodies were laid out in long lines and female nurses walked up and down the aisles checking dog tags for the names of the deceased.

A Major noted the soldier’s rank, battalion, and nature of each fatality.  A clerk in Washington DC would receive those charts and decide which medals to send the dead soldier’s family on behalf of their sacrifice in America’s Great War.

The Major came to the body of Technical Sergeant James Scott and looked down at his papers to begin writing when he saw something move in the corner of his eye.  The dead man was sitting up.