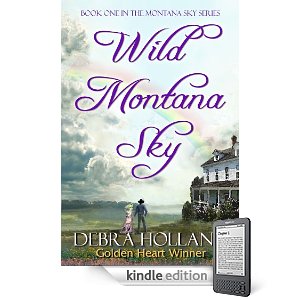 Debra Holland, author of Wild Montana Sky, discusses her book, her journey as a writer, and self-publishing on Kindle.

DAVID WISEHART: What can you tell us about Wild Montana Sky?

DEBRA HOLLAND: Wild Montana Sky (WMS) was the first book I ever wrote. The idea came to me when I was briefly dating a young cowboy. We had nothing in common, and I thought to myself, if we lived 100 years ago in the West, this might just work.

Luckily, I discovered Romance Writers of America (RWA) when I was beginning to write the book, and (from my local RWA chapter) discovered my writing teacher Louella Nelson. Lou had a teaching/critique group that I joined, which is why my first book didn't end up under the bed like so many other authors' first attempts. WMS won the RWA's Golden Heart award for unpublished authors in 2001. From that award, I was able to interest an agent, although he wasn't able to sell the book because it was "sweet," meaning no sex scenes, and also the historical market at the time was on a downturn, especially for Westerns. Berkley almost bought it, but somewhere up the chain of editors, it ended up rejected. I wrote another book in the series, Starry Montana Sky, and it started finaling in contests. Along the way, I switched agents, and even though historicals had become popular again, "sweet" books were not. Agent number two couldn't sell it either.

At the time, I was SO disappointed about not selling, now I'm delighted. I'm SO glad I can self-publish these books. The process is SO much fun. Although I must say, that checking sale figures has become my new addiction!

DEBRA HOLLAND: The hero and heroine in Wild Montana Sky had their origins in me and my cowboy. But of course, they came out quiet different then us. They are their own people now. :) The characters in my other books tend to come to me. Then I think about their strengths and weaknesses—fears, flaws, and childhood wounds. What are they going to have to overcome for their character arc?

Sometimes I might base their appearance on someone in real life. For example the heroine of my second series (fantasy romance, which will be self-published in July) was a woman I saw in a restaurant. I liked her looks—beautiful in an unusual way—and jotted down notes. I also still have her in my mind's eye.

DEBRA HOLLAND: My ideal reader is someone who likes an old fashioned romance. That doesn't mean he or she is old-fashioned, just that they enjoy a story that is more traditional.

My uncle, who helped me with the shooting parts, just read it on Kindle and wrote me the nicest email about how he loved it. That this manly guy could be touched by my book meant so much to me.

DEBRA HOLLAND: When I was a child, I wanted to grow up and write down the stories my grandma told me about her childhood. She was definitely adventurous! I have a masters degree and a Ph.D, so I was in school FOREVER! That burned me out on writing. By the time I got around to wanting to write, my grandma had forgotten a lot of the details of her childhood that I would have liked to have. That's one of the few regrets I have in my life, that I didn't write her stories earlier. I still have the info and the stories, I just haven't done anything with them.

Lou's writing group is what turned me into a writer because I learned the craft of writing fiction. (I could already write boring journal-type nonfiction.) I also became a better nonfiction writer because of learning to write fiction.

I wrote the two Montana Sky books, then wrote a short story for Andre Norton's (the Grand Dame of Science Fiction and Fantasy) Witch World anthology. I wrote her a letter asking about the anthology, and she wrote back that she didn't do it any more. But she included a few details about her life, and I wrote back. We ended up having a correspondence in the last two years of her life. I took that story and made it into a book (set in my fantasy world, not Witch World.) Sower of Dreams (at the time titled Withea's Way) went on to final in the RWA Golden Heart 2003 contest. Andre gave me an endorsement for the book. It was probably the last one she did.

I also started writing nonfiction books, and my second agent sent out two of my proposals. I started another round of rejections, this time because I didn't have a big enough "platform." The editors would like the premise, like my writing, but not want to take a risk on anyone not well known. I finally decided, I'd write one of the books (about boundary setting with difficult people) and self-publish it. At the time, I was thinking of a book I could sell at talks and seminars in the back of the room or on my website. Ebooks didn't even occur to me. But now I'm going to take my nonfiction straight to ebooks, although I may still do some "real" books to sell at talks.

Basically, for the last two years, I've been concentrating on writing nonfiction. It wasn't until my friends started self-publishing their fictions novels, that my interest in my fiction perked up. Now I'd rather write fiction than nonfiction, but will try to do work on both.

DEBRA HOLLAND: I've just come off a grueling 5 month process of writing a book on grief for Alpha Books (the publishers of The Complete Idiots guides.) They are coming out with a new line called Essential Guides. Mine is The Essential Guide to Grief and Grieving. Doing a complete book in five months—according to their way of writing, not mine—sort of burned me out. I had to give up a lot of social activities and training for my third degree blackbelt in karate in order to accomplish it.

Self-publishing the novels has given me some excitement about writing again. I'm dabbling—writing a couple of pages at a time on the next book in the series, and am getting Sower of Dreams, and it's sequel, Reaper of Dreams ready to self-publish. After them, comes a contemporary romance I wrote last year. Then I think I'll be ready to really dig into writing again. When I'm in the flow, I like to write about 5-7 pages a day about 5 days a week.

DEBRA HOLLAND: Authors who persist in the face of rejection, then succeed with books that I love.

DEBRA HOLLAND: I haven't really promoted my fiction yet. I've been too busy. A friend took me to task about it today. She said she'd told her writers' group about how I'd self-published my books, and they all went to my website to find them. But I don't have anything about my fiction on my website, which is for my psychotherapy, coaching, corporate crisis counseling, and nonfiction writing. It's not that I wouldn't put a link with my books on the website—it's on my to-do list, but my web designer quit recently, and I haven't replaced her. (Something I promised my friend I'll remedy right away.) I've posted about the books on Facebook and Twitter. Some of my wonderful writer friends have also posted it on their pages. I've talked about it at my local chapter of RWA, trying to educate other writers about this opportunity. I wrote two posts about it on my blog, which I don't think anyone reads.

I do have plans to do guest blogs. I've scheduled three for the end of July when I think the other series will be up. I've been gathering review sites that are open to self-published books, and plan on making requests for reviews.

I think the best promotion is pricing Wild Montana Sky at $0.99 because it makes people willing to try out the story. Then, if they like the book, they are willing to buy the second one in the series at $2.99. Right now WMS is outselling SMS by about 5 to 1.

DEBRA HOLLAND: The ebook world is exploding, and Kindle is the leader of the pack. But I don't think you should limit yourself to Kindle. Put your books up on Barnes & Nobel and Smashwords. I sold about 50 books at B & N in May, but my Kindle sales were about 550. This is after four and a half weeks. It's interesting to watch the sales grow each week. Amazon also has the top 100 lists. In the last week, WMS has been on the historical list, and yesterday made the historical romance list. That was exciting. Then it fell of the historical romance list. It will probably bounce around on the lists. But I'm amazed that I even made it there so soon!

While I still love reading paper books, I also love my Kindle. I'm going on vacation this weekend and instead of taking 5 books, I'm just taking the Kindle. How cool is that!

I think inexpensive ebooks make readers more likely to try new authors. I certainly have chosen some books because I saw them on one of the Amazon lists.

DEBRA HOLLAND: First of all, the same advice everyone says. Make sure your book is well edited—by someone else who isn't your spouse or your mother or your best friend. A professional. I've had a professional editor, my two agents, and various writer friends do edits. Everyone contributed, and I'm so grateful. But before that, learn the craft of writing so you can write a good book.

Self-publishing gives you control. You get to see results right away. I think I'll make more in a year on two books, than I would have if I'd sold them to a New York publisher. I'm lucky to have had good sales so far, slowly rising as I get more 5 star reviews. However, I think it's important to not have expectations. Some people start out very well, others build slowly.

Ebooks may be around for a long time. I like to think that someday my nieces' grandchildren might make money on my books.

Debra Holland received a master’s degree in Marriage, Family, and Child Therapy and Ph.D in Counseling Psychology from the University of Southern California, and is a licensed Marriage and Family Therapist. For twenty-three years, she’s counseled individuals, couples, and groups. She specializes in communication and relationship issues. Debra is a three time Golden Heart finalist and one time winner. She has also finaled in the Orange Rose contest several times. In 2008, Debra’s nonfiction self-help book, Back on Track, was sold to Bill Phillips’ company, Transformations. The Essential Guide to Grief and Grieving published by Alpha Books (a subsidiary of Penguin) will be out in November 2011. Debra's Golden Heart Winner, Wild Montana Sky, and the next in the series, Starry Montana Sky, are available on ebooks. Her Golden Heart finalist, a fantasy romance, Sower of Dreams, and it's sequel, Reaper of Dreams will available July, 2011.