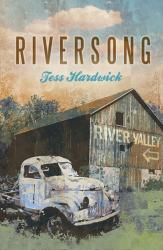 “Riversong is a remarkable debut novel for Tess Hardwick. This warm-hearted, compelling book is an enveloping saga of human resilience. Hardwick's real achievement is her knack for storytelling—she has carved her story with vivid grace and crafted a superbly plotted, and compulsively readable tale that triumphs. In short, Riversong is an inspiration. Tess Hardwick is a delightful new voice in fiction—one that is well worth listening to.”
—Amazon reviewer “Natalie”

“I had such great fortune to come upon this wonderful novel. The story was simply engaging, creating a world in which I was able to delightfully lose myself. I found the storyline to be quite empowering and hopeful, as it encapsulated a world filled with struggles and redemption. I did not want it to end.”
—Amazon reviewer Theresa P. Miller

Author Tess Hardwick assembles a colorful cast of endearing small-town characters and takes you on a journey that will make you believe in the possibilities of life—even in the face of overwhelming adversity and unimaginable grief. Lee Tucker is the kind of woman you find yourself rooting for long after the last page is read.

When Lee’s husband commits suicide, he leaves her pregnant and one million dollars in debt to a loan shark. Out of options, she escapes to her deceased mother’s dilapidated house located in a small Oregon town that, like her, is financially ruined, heartbroken and in desperate need of a fresh start. Lee's resilience leads to a plan for a destination restaurant named Riversong, to new chances for passion and love, and to danger from her dead husband's debt as her business blooms.

A surprising mix of romance, humor, friendship, intrigue and gourmet food—Riversong entertains while reminding you of life’s greatest gifts.

Ellen answered on the third ring, sounding groggy and thick with sleep. “Lee, you alright?”

“There’s a bear in my backyard.”

“That’s what your mother and I called him, Clive.”

“Was he big and black and scary?”

“Sounds like him. I’ll be right there.” The line clicked off before she could say, no don’t come, he’s right outside the house, there’s no way to get in.

Lee stood, pressing her forehead on the window next to the front door, searching the darkness for Ellen. Clive was still in the fenced back yard. She could hear him pacing and pawing at the garbage cans. Ellen emerged from the night, lantern in hand, in a walk-run down the dirt driveway, her long gray hair in a braid and dressed in a flannel nightgown and work boots. She was carrying a long gun - a shotgun Lee supposed. Lee opened the door a crack and yelled to her. “Hurry, he’s in the back yard.”

Ellen began to run towards the door. Lee opened it wider, pulled her by the arm into the house, slammed the door shut and bolted the lock. “You must be insane running around outside with a bear on the loose.”

“I’ve had the pleasure of his acquaintance five years in a row now.” She held the shotgun with ease, like an umbrella. “He always appears this time of year.” Ellen started up the stairs to the bedrooms. “He’s hungry after the long winter.”

Lee followed her. “What are you going to do?”

“Get rid of him.” They reached the second floor and Ellen marched to the window. “This is the best place to get a shot at him if he’s in the yard.”

“I don’t think we should hurt him,” Lee said. “Isn’t that illegal or something?”

Ellen opened the window and put the barrel of her shotgun through the opening. “Don’t worry, I won’t kill him.” She lifted the gun to her shoulder. “Too messy. We’ll just scare him off.”

Ellen pulled the trigger. The sound was deafening. The air filled with the smell Lee remembered from firecrackers at Fourth of July. Lee moved closer to the window and Clive gazed up at her, his head tilted like he was confused. She had the distinct, crazy feeling once again that she could almost hear his thoughts but they were a jumble of confusion, disappointment, anger, instead of information. He snapped his jaws and lunged toward the house, disappearing from view under the awning of the kitchen’s door. They heard him pushing the door, the wood creaking with his weight. Ellen fired another shot out the window. Lee collapsed to the floor, hugging her knees, afraid to look. Ellen fired again and then they heard a scrambling noise at the side of the house.

Ellen backed a few feet from the wall. “He’s climbing up the side of the house.”

Lee hugged her knees tighter and squeezed her eyes shut. “What?”

Ellen’s voice was raised an octave, yelling like an excited child. “He’s using the awning for leverage!” Lee opened one eye to see Ellen creeping towards the window and peering up. She heard claws on the side of the house, and it sounded as if he were making deep holes into the wood siding.

“He’s reached the top. Good Lord, he’s on the roof.” There was the sound above their heads of wood splintering and falling in the attic space between the roof and the ceiling. Outside the window several shingles floated to the ground. Lee expected to see him break through and land on the floor in front of them. She jumped up and grabbed Ellen’s arm. They looked in each other’s eyes and fear passed between them. “What does he want?” said Ellen.

For a moment there was silence and then more back-and-forth movements as he walked the roof-line. “Clive, what do you want?” Ellen raised the shotgun and the barrel followed the sounds, her blue eyes intense. “I’m ready if he falls through.”

Lee backed towards the window, and for several minutes they heard him pace until finally his footsteps descended the slope of the roof and then there were several loud thumps. They ran to the window just as Clive reached the ground. Ellen raised her gun and aimed it at his head. “The mess be damned, I’m gonna shoot the son of a bitch.”

Lee, standing behind Ellen now, saw beyond the fence a dark shadow, and grabbed the flashlight from the window sill. She aimed the light towards the movement. “Oh my God,” Lee said. She saw two bear cubs. “Don’t shoot.” She gripped Ellen’s shoulder. “Clive has cubs.”

Clive scurried over the fence and growled direction to her babies. They ran to her and she nuzzled them for a moment before looking back at the house. Lee touched the window with the palm of her hand and felt something enter her, not words exactly but a feeling. It came from Clive through the air, a small zap like electricity inside her mid-section where she imagined her uterus dwelt and then the thought: I want this baby. Clive shifted her gaze away from the house to her cubs and led them towards the thick trees at the edge of the woods. Lee watched from the window until they disappeared into the night. She sat on the edge of the bed. Had

Ellen sat next to her on the bed. “We’re safe now.” She patted Lee’s leg. “I thought Clive was going to fall right through that old roof.” She chortled and shook her head back and forth.

Lee giggled and her shoulders began to shake, tears sliding down her face.

Ellen began to laugh too and the more they tried to stop, the harder they laughed. Ellen hobbled to the window and rested her hand on the sill, doubled over, breathless. “Stop. My stomach hurts.”

Lee sobered. She folded her hands in her lap. “I’m pregnant.”

Ellen’s face shifted like someone slapped her. A split second later she went still. “I see.”

Tess Hardwick is a novelist and playwright. She has a BFA in Drama from the University of Southern California. In 2000 she wrote her first full-length play, My Lady’s Hand which subsequently won the 2001 first place prize for new work at the Burien Theatre. This is her first novel.

Like her main character in Riversong, Tess is from a small town in Southern Oregon. She currently lives in Snoqualmie, Washington with her husband, two small daughters and a teenage stepson. She is inspired daily by the view of the Cascade Mountains from her home office window.

Booktrope is a new type of publishing company, founded in 2009 in Seattle, WA. We are pioneering a new type of book development process called team publishing. We are committed to the creation of quality books and to our unique marketing methods, which include offering all of our books online to read for free.