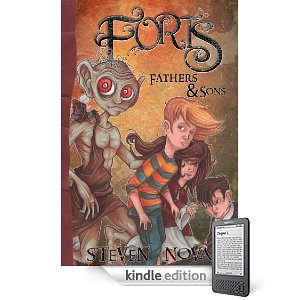 “But there was something much more hidden between the covers of Forts: Fathers and Sons. Mixed in with this epic fantasy we find characters with realistic problems. It was more emotional than I expected. I wasn't expecting the story to touch on things like domestic abuse, but is does, and it does a wonderful job at it. Each character, even the non-human ones, had their own past and background story that they brought to the table. I really enjoyed getting to know each one of them. The universe that Novak has created is so large. There are surreal surprises around every corner, but that is just the norm for the Star Wars universe. The Forts universe works the same way. There is no way you could cover it all in one book. There is so much room for this story to go, and that makes me excited to continue on in this series.”
—Jami Slack, yaddict.blogspot.com

“I was delighted to read another book that could have limitless possibilities. Now, when I say this, I mean that the story could go anywhere and go on practically forever = limitless. Harry Potter is like this. Lord of the Rings is like this. Since the world of Forts (worlds) is so large, the story could go on in the book for hundreds, maybe thousands of years, introducing new characters and places.”
—Austin, readingtween.blogspot.com

“Fortunately, author Steven Novak skillfully spins his tale in a manner that allows the reader to understand and empathize with his protagonists and keeps the reader engaged in the narrative from the opening paragraph to the final lines. ”
—Steven Bergson, UJA Greater Toronto

“The fantasy world created by Steven Novak is alive, not only with malice and force, but also with human dignity and courage in the face of insurmountable odds. That's a pretty heady concoction, if you ask me. I mean, who doesn't love a good underdog story? And as underdogs go, the protagonists of the story are as good as they get: Kids in their early teens who have nearly had the nobility beaten out of them by their harsh circumstances. Novak does not paint his characters too thick, and that's a great thing. Even some of the villains are sympathetic, and your heart breaks for the situations. If a book can give you all that—a reason to believe in human nobility and hope, and all for less than $20.”
—MJ Heiser, author of Corona

“What a lovely mix of adventure, humor and heart. The children at that center of this story are easy to relate to and root for (even, sometimes, Donald). The new world introduced is filled with well-developed, interesting, and beautifully illustrated creatures. It's wonderfully layered with a pace that is both exciting and emotionally satisfying. I cannot wait to start the second one!”
—Nina Perez, author of The Twin Prophecies: Rebirth

“When reading Mr. Novak's book I was reminded of Stephen King's The Body and It (the early section, involving the child characters). That is as high a praise as I can give Fathers and Sons. A bonus for the reader: each chapter is headed by an original illustration by the author, featuring a scene from the chapter. I found this an ideal way to draw me further into the story. Each chapter, too, ends on a cliffhanger that, for most of the book, isn't resolved until three or four chapters later. The phrase page-turning was invented for such a story. Well done, Mr. Novak. Bring on book two: Liars and Thieves.”
—James McShane, aardvarkian.com

For Tommy Jarvis, life has never been simple—quite the opposite, in fact. It is, however, about to become decidedly more difficult. Moments after stumbling through a doorway to another world, Tommy and his friends discover they are the key to ending a war in which the casualties are too great to count and their chances of survival are almost nonexistent.

An intensely personal piece that intertwines aspects of fantasy, science fiction and horror, Forts: Fathers and Sons is the first installment in an epic fantasy trilogy from author and illustrator, Steven Novak. The sequel, Liars and Thieves, is currently available as well and the finale of the series is due early in 2012.