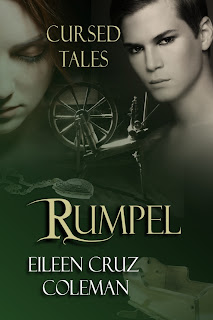 "Eileen Cruz Coleman's Rumpel has given new life to the Brothers Grimm fairy tale. In Ms. Coleman's version the devious Rumpelstiltskin still strikes a deal with a poor miller: a magic spinning wheel that turns straw into gold in exchange for his unsuspecting daughter's first born. But from royalty and common folk to spirits, trolls, witches, and angels, there's so much more to the tale this author weaves, one that in many ways parallels the injustice of modern society—misuse of power, forbidden romance, unyielding discrimination, and poverty at its worse. Rumpel is a must read for anyone who enjoys a thought-provoking escape into Old World fantasy."
—Amazon.com Review by Loretta Giacoletto

While Rumpelstiltskin forged ahead with his plan, a battle between his world and another world was brewing, and a forbidden romance between a prince and a common girl was being tested. In the end, the spinning wheel will determine the fates of everyone.

When a ship carrying sick and desperate people from the Kingdom of Niaps arrives on the island of Rodavlas in search of a lost gold-spinning wheel which the Niapsons believe rightfully belongs to them and on which their very existence depends, the island inhabitants—spirits, trolls, mermaids, fallen angels and humans—are thrust into a course of events during which some will become allies and others will turn against their own.

And Elizabeth Miller must accept her connection to the newcomers and use her secret skill to defend her unborn child from a vengeful troll, Rumpel, who blames her and her father Franz Miller, for the deaths of his son and wife.

Rumpel swallowed the last bite of his dinner, fish wrapped in lettuce, and glimpsed at the burning fireplace; his bed situated a couple of feet in front of it. He sighed and half closed his eyes. It had been a long day. If not for the spirit who had left a painted rock at his front door, a sign that he would visit Rumpel that night, Rumpel would have gotten into his bed and let the sound of the sputtering fire soothe him to sleep.

Yawning, Rumpel reached for his hat which he always kept on a hook on the wall next to the door, his bow and quiver of arrows right below it on the floor.

The wooden boards beneath his feet squeaked as he stepped onto his front porch. He picked up the rock. An owl hooted in the distance. Observing the paint colors the spirit had used, white and turquoise bleeding into each other masking most of the black volcanic stone, Rumpel moved the object between his fingers as he tramped down the steps and onto the grass. The moon shone on him as if he was standing center-stage. Most nights, Rumpel offered the moon companionship by dancing and singing, “Shine, shine, my love…shine as bright as you want. For soon, we will have our child returned to us. Shine, shine, my love.” But not on this night.

His earlier encounter on the street with Franz Miller had drained him. “Have you told your daughter? Do it today or I shall retract my offer,” Rumpel had said to Franz.

“No, no, no,” Franz had said, his pupils so shrunken Rumpel wondered if he was drifting into the world of spirits.

“Soon enough you will visit the volcanoes but not until I have what I want,” Rumpel had said.

Franz had run down the street as if the air itself hunted him.

Rumpel looked at the moon. “Forgive me, Luna.” His beloved Luna was buried next to her child, their child, under a tree, a hundred feet away from their house at the bottom of a hill where a half-dead creek flowed into nothingness.

“Shine, shine, my love.” He sat on the front steps of his house, the stone still in his hands.

Hoot, hoot. “I’m sorry, my friend, but I do not have the energy to dance or sing tonight.”

Squinting, he looked out at his yard. The spirit would be appearing soon. Rodavlas’ spirits moved among the living, making themselves visible to anyone they wished. Often, before paying a personalized visit, a spirit left a sign, a tipped-over chair in an otherwise orderly room, missing dishes from a cupboard, drawn window coverings in the early afternoon, or as in Rumpel’s case, a decorative item on a doorstep.

Only determined and purposeful spirits risked materializing, appearing as white, nearly transparent, light-weight figures which could be harmed the same as the living. With one exception: A materialized spirit could never die again. It could be tortured for eternity.

Paulo, as Rumpel’s would-be visitor was called, emerged at night when the majority of Spirit Chasers could be found at home or in The Lowly Tavern, telling stories of how they had spent hours hunting a particular spirit for its knowledge, its skill, or simply because they felt it was within their right to do so.

Whatever knowledge or skill a person had had while alive, magnified in the world of spirits. A prodigy in life was destined to be chased in death. Paulo was such a prodigy.

Rumpel threw the rock into the yard. The owl hooted louder, insisting that Rumpel dance and sing. Rumpel ignored him and waited for Paulo to come into view.

Paulo’s image was just beginning to form; first his face appeared, white and round. Then his body materialized around a bloated belly, equally as white as his face. Rumpel made towards him. But instead of receiving him, Paulo dashed behind a tree.

Rumpel widened his gaze, and searched the yard for Chasers. He reached for his bow and arrow. Standing still, he listened for any noise that would give him a clue as to the location of the intruder. Tall shrubs on the side of his yard moved. Rumpel pulled back on his bow. “I know you’re there, Chaser.” An arrow flew above the shrubs and down to the bottom of a hill. “The next one won’t bypass you.”

A woman stood among the vegetation. “He’s my son. I mean him no harm.” She walked towards the tree. “Paulo, let me protect you. Come, my son, follow me into the forest. I know a place where you will be safe.”

“Stand where you are, Chaser.” Rumpel pulled back on his arrow. “That you may or not be his mother, matters not to me.”

The woman held her arms out as she ran towards the tree. “Let me protect you. Follow me into the—”She fell forward, an arrow in her back.

Paulo came out from behind the tree and paid no attention to the now dead woman.

“Her spirit will take some time to find its way back and even then, she will probably not remember this event,” Rumpel said. Spirits were known for losing much of their living memory. They were also known for traveling far and wide, picking up knowledge from other lands unknown to Rodavlas and bringing back what they had learned.

“I can’t be sure. I don’t think she was my mother. Many women have claimed to be my mother. I can’t tell who is telling the truth.”

Hoot, hoot. Paulo turned in the direction of the noise. “Did you speak with Franz Miller today?” he asked, returning his stare to Rumpel.

“You were there when we spoke.” Rumpel turned the dead woman over. “I don’t think she was your mother. Her face is blank and cold.”

“Do not forget your promise to me. I’m tired of hiding.”

Rumpel yanked the arrow from the woman’s back. “Soon, I will have a child. I will have two children.”

Paulo scrutinized the yard and front porch. “Where have you hidden it?”

“How old were you when you died? Ten, maybe, twelve?”

“When Franz’s daughter gives birth to my child, and I don’t have a need for the wheel, I shall return it to you. Of that you can be sure. You can also be sure I will protect you as any father would protect his son.” He came closer to Paulo. “I promise.”

“I’ve seen Elizabeth on the beach with the Prince laughing and hugging each other. Are they lovers?”

“It’s late. My bed calls. The volcano is calling you and the animals are growing impatient,” Rumpel said, staring at the woman’s body. “They’ll want to drag her away to feed.”

“What need did she have for gold?”

“The living has much need for gold, indeed. And you are a lot smarter than you pretend.” Rumpel left Paulo to ponder his statement.

Once inside his house, Rumpel did not take time to undress. Nestled under the covers, he said, “Shine, shine, my love,” and closed his eyes.