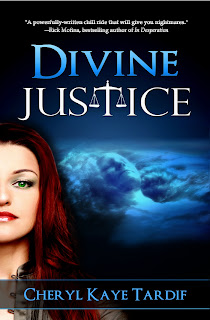 "Divine Justice is a powerfully-written chill ride that will give you nightmares. Best to keep the lights on with this one."
―Rick Mofina, bestselling author of In Desperation

"One of those 'sitting on the edge of your seats' read as the team unravels the mystery and tries to solve the case. It is a unique blend of action, mystery...This book is highly recommended."
―Margaret Orford, Allbooks Review

CFBI agent and Pyro-Psychic Jasi McLellan battles a serious infection that threatens to claim her life. Slipping in and out of consciousness, she remembers the Parliament Murders...

One by one, members of Ontario's Parliament are disappearing, only to be found days later, disoriented and drugged. Or worse―dead. Police are stumped and the CFBI brings in a covert PSI team, agents with special psychic abilities.

Accompanied by Psychometric Empath Ben Roberts and new team member Victim Empath Natassia Prushenko, Jasi heads for Ottawa and uncovers a plot so devious that Canada's national security is at risk. If that isn't enough to deal with, Jasi bumps into old flame, Zane Underhill, who wants to rekindle their relationship that ended three years earlier.

But the investigation takes precedent and Jasi is forced to place her feelings for Zane on hold in order to find a killer who has more than justice in mind for his victims, and in the end she makes a gut-wrenching decision―one that will cost the life of someone close to her.

Prologue
Jasi McLellan drifted in and out of consciousness, her thoughts like waves lapping restlessly against the shore. When she opened her eyes, distorted faces flashed past her and indistinct words assaulted her ears. She reached for the names that belonged to those faces, but they eluded her. She tried to swallow, but her mouth and tongue were sandpaper-dry. She inhaled slowly, trying to place the smell, a mix of antiseptic and sweat.

Where the hell am I? And why is it so dark, so cold?

She blinked once and everything changed.

Before her lay a long, murky corridor. At her feet, the bare hardwood floor was polished to a reflective shine. Her sandals clicked as she headed toward the door at the end of the hall. A crack of backlighting outlined the door's shape. As she moved toward it, the door appeared to drift further away.

She paused and leaned down to look at her reflection in the gleaming floor. A face she didn't recognize stared back at her. Amidst charred skin, blue eyes blinked at her.

I have green eyes.

She cried out in terror when the face became two.

The dead girl from her closet was coming for her.

Jasi faced the girl. "Why can't you leave me alone?"

The girl's accent was soft―from South Carolina maybe―and the pink skipping rope noose cut deeply into her lolling neck with every word she spoke.

"He keeps callin' me," the dead girl whispered.

The girl began to sob and Jasi reached out to touch the child's blistered shoulder. She snatched her hand back when it encountered skin that was morgue cold.

The girl's next words turned Jasi's blood to ice.

Confused, Jasi shook her head and took a few steps backward. "What do you mean? You're right here."

The girl said nothing.

"I've seen you ever since I was a child," Jasi said. "You've never spoken to me before. Why now?"

Emily lowered her head. "You jes never heard me before. Now you're open-minded. Now you're hearin' me fine."

A light flickered at the end of the hall and Jasi glanced over her shoulder.

The girl drifted backward toward the shadows.

As Jasi drifted off into a peaceful, healing sleep, she made a solemn vow to the dead girl in her closet.

I'll find you, Emily. I promise.

The dead girl finally had a name―Emily.

She looked down at the woman lying motionless in the bed. She's so pale, so still. Like death.

The door opened behind her. Someone stepped into the room.

"Is Jasi awake yet?"

Natassia glanced over her shoulder. "No, she hasn't moved an inch. I'm worried about her, Ben."

Benjamin Roberts crossed the room, bringing with him an air of calm authority. When he reached Natassia, they stood side-by-side, keeping vigil over the woman in the hospital bed.

It had been nearly two weeks since their partner and team leader Jasmine McLellan had taken a bullet high on her left arm. She'd been doing well, was even out of Vancouver General Hospital for nearly a week, but then she'd taken an unexpected turn for the worse. Her arm had swelled painfully, the bullet wound festering. Without warning, a blood infection invaded Jasi's body, causing serious complications and a sudden trip back to the hospital. That's where they discovered she had a concussion and mild swelling of the brain, probably from when she hit the ground after an explosion during the last case.

Natassia stared down at Jasi. "I don't think she's getting any better, Ben. She looks like she's barely breathing." She reached out to touch Jasi's arm, but snatched back her hand as if she'd touched a hot flame.

"You know what can happen if I touch her. After all she's been through, the last thing she needs is me poking around in her mind. Anyway, we already know what happened during the Gemini Murders. It's not as if we need to know any more."

She studied the woman in the bed, taking in the tangled mane of shoulder-length auburn hair and the sprinkle of cinnamon freckles that appeared much darker against the creamy whiteness of her face.

"It's up to Jasi now," Ben said quietly. "We both know how stubborn she is."

He turned away, but not before Natassia saw tears in his eyes. "Where are you going?" she asked.

"I want to check on her status. I'll get her doctor."

Natassia felt a void in the room as soon as he was gone. She couldn't help but feel a little better when he was around. If there was one thing she'd learned, Ben knew how to take care of things―especially the people he cared for.

She watched Jasi. "And he sure cares a lot for you, my new friend."

Although she'd only known Jasi for about three months, she'd grown fond of her. The slender redhead had a lot of spunk. That was something she could appreciate.

Natassia had spent a few years consulting with a Russian agency similar to the Canadian Federal Bureau of Investigation, which had been formed in 2003. As a Victim Empath capable of receiving cryptic flashes from the minds of victims, she was responsible for bringing down some notorious criminals. After a brief scandalous affair with a married field agent, Natassia was 'traded' to Canada's CFBI. Recently, she'd been assigned to the PSI Division and relocated to Vancouver, B.C.

"Remember when we first met, Jasi? You thought I was an escort hitting on Ben." She laughed. "The poor guy practically fell over in his chair when I sat down with you two."

It had been an awkward first meeting.