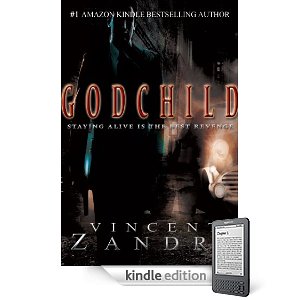 Kindle bestseller Vincent Zandri, author of Godchild, discusses his book, his journey as a writer, and publishing on Kindle.

DAVID WISEHART: What can you tell us about Godchild?


VINCENT ZANDRI: Godchild is the sequel to the The Innocent which has been an Amazon Kindle Top Ten bestselling novel for a month...

It's a true sequel in that it answers questions left unresolved in The Innocent, like who killed Jack Marconi's wife. And the answer takes him on a perilous journey from Albany New York down to Mexico and back up again. It also nearly kills him.

VINCENT ZANDRI: I usually base all my characters on real people I know or wish I knew. I use their real names right up until galley proof stage. That way I have a clear picture in my mind of who is who.

VINCENT ZANDRI: I started off as a stringer for The Albany Times Union, then worked for a bunch of national and local Albany magazines. I eventually attended Vermont College's MFA in Writing program. A year after graduation I signed a mid-six-figure deal with Delacorte Press in NYC for two books, The Innocent (As Catch Can) and Godchild. Those books are now re-published through my new publisher, StoneHouse Ink and StoneGate Ink, who also publish my newer novels, The Remains and Concrete Pearl. In between publishing deals I've spent a good deal of time overseas as a photojournalist and foreign correspondent on assignment in places like Benin, Africa, Moscow, Istanbul, Athens, Paris, Florence, Shanghai, and well, you name it. All details of the journey or journey's aside it's been long and hard and fraught with some of the worst nervous breakdown type calamities, including canceled contracts, divorces, near bankruptcies, being shot at by jealous husbands in foreign lands and more. But I'm not at liberty to discuss this stuff in detail.

VINCENT ZANDRI: I write, pretty much all day. Therefore I am single.

VINCENT ZANDRI: Charlie Huston (the best noir novelist in the business), Jim Crumley (God rest his soul), Ernest Hemingway and my son Harrison who is writing his first novel.

VINCENT ZANDRI: Via social networks, and very cool virtual tours with Pump Up Your Books!!!!

VINCENT ZANDRI: My books are traditionally agented deals and are published in ebook and Trade Paper...I make far more money on Kindle than anywhere else, and I wouldn't want it any other way.

VINCENT ZANDRI: Do it. Do it now. Do it often.

Vincent Zandri is an essayist and freelance photojournalist, and the author of the recent bestsellers, The Remains, Moonlight Falls and The Innocent. His novel As Catch Can (Delacorte) was touted in two pre-publication articles by Publishers Weekly and was called “Brilliant” upon its publication by The New York Post. The Boston Herald attributed it as “The most arresting first crime novel to break into print this season.” Other novels include Godchild (Bantam/Dell) and Permanence (NPI). Translated into several languages including Japanese and the Dutch, Zandri’s novels have also been sought out by numerous major movie producers, including Heyday Productions and DreamWorks. Presently he is the author of the blogs, Dangerous Dispatches and Embedded in Africa for Russia Today TV (RT).

He also writes for other global publications, including Culture 11, Globalia and Globalspec. Zandri’s nonfiction has appeared in New York Newsday, Hudson Valley Magazine, Game and Fish Magazine and others, while his essays and short fiction have been featured in many journals including Fugue, Maryland Review and Orange Coast Magazine. He holds an M.F.A. in Writing from Vermont College and is a 2010 International Thriller Writer’s Awards panel judge. Zandri currently divides his time between New York and Europe. He is the drummer for the Albany-based punk band to Blisterz.