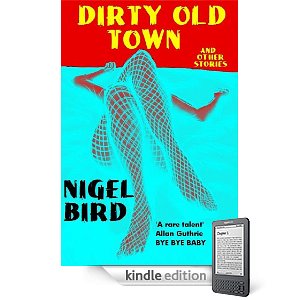 Nigel Bird, author of Dirty Old Town (And Other Stories), discusses his book, his journey as a writer, and self-publishing on Kindle.

DAVID WISEHART: What can you tell us about Dirty Old Town (And Other Stories)?

NIGEL BIRD: It’s a collection of soft-noir stories with heart and soul. Each one of them will leave some imprint on the reader at some level and I’ve been told by many that some of the stories stay with them for a good while after finishing (something I take as a huge compliment).

Much of the work has already been published elsewhere and, as such, has passed the scrutiny of some of the finest editors around in the genre.

Each tale is very different and each character strongly individual.

What I’m most delighted about has been the response of the reviewing and writing community. Many reviews have been written by people whom I admire greatly and I’m very grateful for that support—it’s both humbling and uplifting. While in terms of sales, Dirty Old Town has yet to set the world on fire, I couldn’t be prouder of what I’ve achieved as a writer in terms of its acceptance by my more able peers.

I can also say that I’m donating the profits from any sales in May to the Red Cross Tornado Relief Fund over in the States inspired by Daniel B O’Shea’s charity flash fiction donation—he’s a good writer and a greater man.

NIGEL BIRD: Before I can write, I need a strong sense of my protagonist. I may not be able to picture them, but I’ll know the kind of life they’ve had and what they’re likely to say or do. Other characters grow through the events that unfold, appearing as they do from nowhere in particular, as if they’re in orbit around the main figure. They often surprise me in the way they are, but that’s one of the things that excites me about the writing process—the not knowing. For those reasons I rarely make conscious attempts at differentiation as that would mean there was something that wasn’t working.

NIGEL BIRD: I’d hope I can reach readers who like to feel something from a story and love to empathise with a character. I’d also think that they’d be fans of noir fiction as well as having a sense of literary traditions.

NIGEL BIRD: I started writing about 20 years ago, in the main focussing on poetry. In 1998, my brother and I set up a magazine called The Rue Bella which became very well thought of. Unfortunately after 5 years of production we had to stop, mainly because we both had young children and had neither the time nor the money to spare.

I carried on, branching out into a screenplay and attempted a novel.

The big breakthrough in fiction came when I was published by The Reader in 2009. In the same issue as me was the work of Seamus Heaney, Vanessa Hemingway and John Kinsella. It boosted my confidence and gave me something powerful for my CV.

At about the same time, I heard from one of my favourite authors, Allan Guthrie. Al’s not only a talented writer, but he’s an agent for Jenny Brown Associates in Edinburgh. I’d sent him my work in the hope he’d represent me. He saw something he liked and took me for coffee to discuss possible changes.

Allan also suggested that I write something in the crime genre, which I did. I’d had an idea rattling for a while and it came out really well. I sent it to Crimespree one night before going to bed and it had been accepted by them when I woke up. That story, ‘An Arm And A Leg’ is soon to appear in the Best British Crime Stories edited by Maxim Jakubowski, a collection that will see me alongside Ian Rankin, Kate Atkinson, Colin Bateman, Christopher Brookmyre, Mr Guthrie, Liza Cody, Alexander McAll Smith and a host of other talents. It doesn’t get a lot better than that.

Twitter and Facebook became really helpful tools. Before I knew it I was having stories accepted left, right and centre.

I won the Watery Grave Invitational contest in 2010 and was also nominated for the Spinetingler Award for ‘Best Story Online’ this year (the winner was to be Matt Funk).

It’s been a long path, a rewarding and an exciting one. With effort and persistence, it’s hard to know where one might end up.

NIGEL BIRD: Having 3 youngish children and a teaching job, the process is to squeeze it in when I can.

Essentially, what I need before I start is the voice and the opening line. When that’s put together with a sense of where I should be heading, things tend to develop a life of their own from there.

NIGEL BIRD: In a bid to move away from anyone already mentioned, I’d have been delighted to have put together either Carter Beats The Devil (Glen David Gold) or Double Indemnity (James M Cain).

NIGEL BIRD: I’ve spent an age on trying to keep sales ticking over. I have a blog and use it for occasional mentions. There’s Facebook and Twitter. I’ve sent out copies for review, drop in to the various forums around and about and tell everyone I meet that they should buy it (and if they don’t have a Kindle, that they should download the Kindle App in their own interest). I even put up a few posters in town and have offered myself to a couple of reading and writing groups—so far no takers.

NIGEL BIRD: It’s a wonderful opportunity to put out work without having to go through the cumbersome channels of agent/publisher. Lots of people out there won’t take simultaneous submissions and that means you can be left hanging around until you can send off again. I’m now 46 and haven’t the time for such a process.

NIGEL BIRD: First of all, build up something of a CV or reputation by sending off to magazines or websites that you know.

If you can, get an opinion of your work from someone who’s not close to you and whose ideas you can respect.

Made sure that the work is correctly formatted, punctuated correctly and has no errors.

Put together a sharp cover that will catch the eye when it’s up as a thumbnail picture, which is the way it will be seen by the buyer for the first time.

Get someone to recommend it if you can.

Go easy with forum posts—it’s a careful balance. Too much of it and you might get people’s backs up.

Very importantly, don’t go on to a forum anywhere to defend yourself from a bad review or hurtful comment, even if you know it is unjust and meant with mean spirit. There are people out there who like to poke sticks at people and who thrive off the response.

DAVID WISEHART: Thanks, and best of luck with your book.

Nigel Bird lives in Scotland. The winner of the Watery Grave Invitational contest in 2010, he was nominated by Spinetingler for their Best Story Online award this year. He is soon to appear in The Best British Crime Stories and is putting together an anthology with Christopher Rhatigan (Death By Killing) called Pulp Ink, due to be released later this year. He is the man behind the blog Sea Minor and the interview series Dancing With Myself.