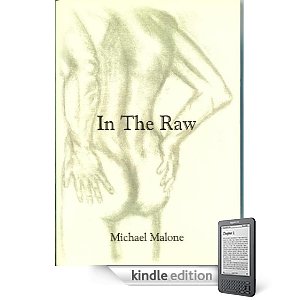 Michael Malone, author of In The Raw, discusses his book, his journey as a writer, and self-publishing on Kindle.

DAVID WISEHART: What can you tell us about In The Raw?

MICHAEL MALONE: This is an accessible, moving and humourous partly biographical collection of poetry. I say "partly" because there are times that the bigger truth is more interesting than my truth. And you know what they say? You should never let the truth get in the way of a good poem. Go with me—I'm paraphrasing here.

MICHAEL MALONE: Me. Sounds egotistical but I write stuff that I would like to read. A good read for me has interesting people, a strong story and imaginative use of language and that's my aim regardless of what I'm writing, whether that be poetry or prose.

MICHAEL MALONE: A looooong one and one that is still evolving hopefully. I began writing in my early thirties when I heard myself saying I would write a book when I retired. Why was I waiting that long? Why not just do it? I wrote two novels in as many years and about a gazillion poems. Attended workshops, conference and read as much as I could about the craft of writing. Read a lot, write a lot (thanks Mr King) became my mantra. Managed to find an agent for the first novel. Got precisely nowhere. Meanwhile my poetry was taking off and I published over 100 poems in small press and literary magazines and managed to win a couple of prizes. Then I got talking with a couple of poet pals who were in the same position as I was. We had long lists of plaudits to our names but poetry publishers weren't interested. The short version is that we set up our own small press—Makar Press—to publish only our own work (we had no funds to publish anyone else) and then we took our work on the road. We contacted everyone we would think of who might want a poetry event and over the next four years we appeared at over 60 venues and sold hundreds of our books.

During this journey I began writing a crime novel. As you do. Got very close with a publisher, but no long tobacco thingy. Wrote crime novel number 2 after crime novel number one won a prize for an unpublished novel. Managed to secure the services of another agent who got close to a deal with a couple of majors. Again, it fell through at the last hurdle. It was heartbreaking, I can tell you. But I was getting validation for my work through the poetry and this continued apace with another collection and a CD of poems. In The Raw sold out and I went through three print runs.

Then, hallelujah, I secured a deal for my first crime novel, Blood Tears and it will be released May 2012.

MICHAEL MALONE: I write in bursts. I'm essentially very lazy and I'll sit on the sofa watching crap TV until I can ignore the urge to write no longer. When that itch becomes unbearable I get to it. At the moment I'm working on another collection of poetry so I try to write one piece per week (hey, I'm busy with other stuff) which I set aside for a few weeks before editing and editing and editing and then I send it to a poet pal for an opinion. I find it hard to be objective about my work. I can look at it one day and think I'm a genius—look at it an hour later and think I write with all the class of a teething toddler. So a friendly but critical once-over from someone whose views I trust is important before I try it out on an audience.

MICHAEL MALONE: How long have you got? I read mostly in the crime field these days as I review for a popular website and I'll drop everything else to read the latest books by R.J. Ellory, George Pelecanos, Dennis Lehane, Robert Crais, John Connolly, Lee Child, Denise Mina, Val McDermid, James Lee Burke. I could go on and on.

MICHAEL MALONE: Again, how long have you got? There are so many. A book I walked about with for days after I had finished it was R.J. Ellory's A Quiet Belief in Angels. Ellory contrived an experience with that book that held me in its grip long after I turned the last page. It is beautifully written, I can't remember the last time I was so engaged with a character and the plot kept me guessing till the very end. A tour de force of modern writing, in my humble opinion.

MICHAEL MALONE: Through actual old-fashioned, in your face poetry readings. Now that I'm on Kindle I'm also going with the holy trinity of facebook, twitter and blogging. I blog over at May Contain Nuts—http://mickmal1.blogspot.com.

MICHAEL MALONE: As I said earlier, In The Raw has gone through a number of re-prints and I'm running out of paper copies again. However, I'm working on a new collection and I need to devote my energy (and funds) to that, so I thought I would give In The Raw one last hurrah by going "e".

MICHAEL MALONE: There is a LOT of white noise out there in the form of other books and other writers. You need to find a way to stand out and get noticed. The best of doing that is to bring to market the best book you can possibly come up with. That means ignoring that wee voice that says "aww, that will do." That means being as professional in your approach as you possibly can. Use the services of an editor, copy-editor and get yourself a good cover. Then work your markets as hard as you can. Its rare for readers to come looking for you. You have to go looking for them. Build up relationships online—network like crazy, but always do it with respect. 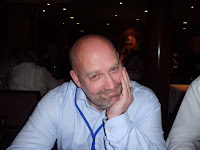 Michael Malone was born and brought up in the heart of Burns’ country, just a stone’s throw from the great man’s cottage in Ayr.

He has published over 200 poems in literary magazines throughout the UK, including New Writing Scotland, Poetry Scotland and Markings. He has one collection of poetry, In The Raw; a joint anthology Running Threads; and a CD Lip Sync through Makar Press. His career as a poet has also included a (very) brief stint as the Poet Laureate for an adult gift shop. Don’t ask.

Michael was the Scottish Correspondent for the writers’ reference magazine Writers’ Forum, he has worked as a Writer in Residence for East Ayrshire Council, Kilmarnock College, Wellington School, Ayr Academy and is regularly invited to talk to writer’s clubs throughout Scotland.

Recognition for his work includes twice being awarded 3rd place in the Constable Trophy; winning first prize in the Pitlochry Prize (for an unpublished novel) for Blood Tears; and first place in the Dorothy Dunbar Poetry Competition in 2008.

He is a regular reviewer for the hugely popular crime fiction website www.crimesquad.com and his blog, May Contain Nuts can be found at http://mickmal1.blogspot.com/.