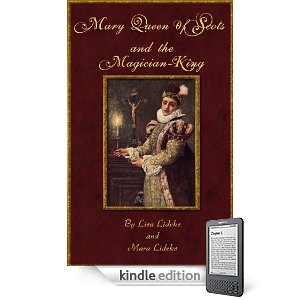 Lisa Lideks, co-author (with Mara Lideks) of Mary Queen of Scots and the Magician-King, discusses her book, her journey as a writer, and self-publishing on Kindle.

DAVID WISEHART: What can you tell us about Mary Queen of Scots and the Magician-King?

LISA LIDEKS: If you think you know Mary Queen of Scots and her third husband, the Earl of Bothwell, because you’ve read Antonia Fraser’s biography, you’re wrong. And that’s also true of the derivative biographies which used Fraser as a source. Unfortunately, those are not few in number.

Mary and Bothwell have too often been maligned and trivialized. Ordinary, they were not. Yet, petty, venal, stupid motives have been ascribed to two of the most intriguing, courageous, and enlightened characters in history. We try to do them justice—which is impossible, of course—but the effort had to be made by someone, and we saw no one else on the horizon.

Although we don’t pretend to know the whole truth, we’ve lifted so many veils and peeked under so many covers we practically feel like Peeping Toms. But the results have been gratifying. Not to mention, astonishing. What we’ve learned about King James I of England is the single most surprising revelation we’ve encountered. And the ramifications reach into the present day.

DAVID WISEHART: How did you do your research?

LISA LIDEKS: Aside from the obvious—namely, reading everything on the subject we could find—the Internet has been an incredible aid. It has given us access to material that would otherwise be unknown to us or impossible to obtain. For example, the internet allowed us to obtain copies of files from the UK's Public Record Office that contained startling, previously unpublished information regarding the true fate of Bothwell. With the Internet the world is, forgive us, an open book. How wonderful is that?

LISA LIDEKS: At this stage of our careers, any readers at all would be ideal. We have no pride. However, we believe there are readers who, like us, instinctively know when they’ve been smacked in the face with historical anomalies. Where do they go for redress? Well, that’s where we hope to come in.

LISA LIDEKS: We're tempted to answer, "A foretaste of what Hell must be like," but we don't want to sound negative. Actually, as a student at UC Berkeley, Mara wanted to change the world. But her world changed instead. A school friend got a summer job with Tom Pollock and Jake Bloom. When she saw that they dealt with scripts, she immediately called Mara and said, “You don’t want to be a lawyer and defend the downtrodden, you want to do something worthwhile, like scriptwriting.” Bad joke, but Mara agreed to write a script over the weekend. Within a few weeks, she was asked to fly down to Los Angeles and meet with Tom and Jake and have lunch with Garry Marshall. Suddenly, she was in show business. (No one ever believes this account, but it, like our historical work, is well-documented.)

But she never overcame her Berkeley background. When I was in college, she pestered me to talk about my classes and the books I was assigned. When I became involved in historical research, she wanted to share in everything I learned. Eventually, she coerced—oops, I mean persuaded—me to join forces with her.

Our work is actually fulfilling her lifelong desire—and mine—to defend the downtrodden. Only now, these include kings, queens, presidents, military heroes, and unsurpassed literary geniuses.

In our book about Mary Stuart, we include a quote from Edgar Allan Poe that says, “That individuals have so soared above the plane of their race, is scarcely to be questioned; but, in looking back through history for traces of their existence, we should pass over all biographies of ‘the good and the great,’ while we search carefully the slight records of wretches who died in prison, in Bedlam, or upon the gallows.” This certainly applies to Bothwell, but to a lesser degree, to other victims of historical frauds, like Poe himself. We wrote our screenplay, Poe Laughing, to extricate him from the gutter into which his reputation was tossed.

The truth about Poe is that we know virtually nothing about him. Most of what we think we know comes from his enemies, and much of it was fabricated. What we do know is that his writings were not, as most of his biographers insist, autobiographical, he did not drink himself to death, and he did not write letters which make him sound like an untalented, tongue-tied teenage girl.

One of the most underrated and underappreciated characters in history is someone we have come to know very well. It’s the seemingly ubiquitous and frequently anonymous forger. One of our favorite examples is Joseph Cosey, who became so well-known for his manufactured “Poe documents,” that his known forgeries have become valuable artifacts in their own right. Charles Hamilton, a famous document expert, once said, “long ago I concluded that there must be far more forgeries of Poe by Cosey than there are original Poe letters." Another influential penman was Thomas Phelippes, Queen Elizabeth I’s personal in-house forger, who played a crucial role in Mary Stuart’s downfall. A familiarity with such characters has enabled us to see history from a different angle.

LISA LIDEKS: Gene Fowler once said, "Writing is easy:  All you do is sit staring at a blank sheet of paper until drops of blood form on your forehead."  We couldn't possibly improve on that description.

LISA LIDEKS: Poe's Eureka.  Who wouldn't want to be able to say they had explained the universe?

LISA LIDEKS: You're looking at it.

LISA LIDEKS: It’s a venue where authors have true freedom of expression.  It circumvents agents, publishers, producers, editors, etc., who basically erect a filter—sometimes a cast-iron barrier—between the writer and the public. Kindle is to publishing what blogging is to the mainstream media. It gives everyone a voice, and even if that occasionally creates a din, it makes the world a more diverse and fair place. Society is experiencing the most transformative time in history, and Kindle is an exciting component of change. We are eager to participate in it. More importantly, we’re out of work at the moment.

Mara Lideks writes, "Lisa and I have been blessed with what we call 'library angels' who have led us to various 'Tumblety moments.' We first encountered Dr. Tumblety when one of us was reading about the assassination of Abraham Lincoln, the other about Jack the Ripper. And would you believe? Dr. Tumblety was picked up as a suspect in both investigations. Bad luck for him, but a lesson for us—talk, compare notes; the angels' alchemy sometimes produces gold.

"Lisa and I feel we've struck gold with Mary Queen of Scots, with Edgar Poe, with Ulysses and Julia Grant, and so many others. We might not survive peer review, because we're not satisfied with what's accepted and blindly repeated by the 'peers.' We look for those 'Tumblety Moments,' and we've found many of them.

"After graduating from the University of California at Berkeley, I gave up thoughts of law school and went into writing for television; when it was Lisa's turn to go out in the world, she went into historical research. While I had worked for Garry Marshall, worked on staff at Mary Hartman, Mary Hartman, co-created and wrote for NBC's 13 East, and several other eminently forgettable shows, when Lisa began working with kings, queens, presidents, and great heroes, I became enthralled with the people in her life.

"We've been working with the angels to explore the world of the maligned, misrepresented, and misunderstood ever since."