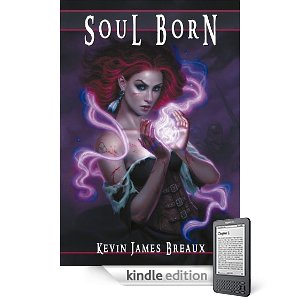 Kevin James Breaux, author of Soul Born, discusses his book, his journey as a writer, and self-publishing on Kindle.

DAVID WISEHART: What can you tell us about Soul Born?

KEVIN JAMES BREAUX: Soul Born begins a series that will take the reader on a journey from the beginning of a world as it is born into fantasy.

This first book was developed with lots of twists and turns, it's not necessarily a mystery, but there are lots of secrets and my characters are not always who they first seem to be.  I like to tell people that Soul Born is not about good and evil, it’s about the shadows pressed in-between.

The first book focuses on: Opal the mage, Tala the elf and Karn the warrior. Opal is the primary character and is a young woman who has been studying in a mage school. She feels she should no longer be a student, and in fact be a teacher. She is ruthless in her push to reach her goals and at times makes poor decisions.

On the back cover of the book I say, "Opal has killed for what she believes are all the right reasons." That's a big hint, right?

All of my writing I put a heavy emphasis on character development, so the books in the Soul Born Saga are all very character driven. I will admit, I do not put a lot of time into world building, as I want to readers to connect with the characters and feel their pain and joy more.

KEVIN JAMES BREAUX: I try and give them realistic issues to overcome. I let them fail, because who out of us has not failed a hundred times.

KEVIN JAMES BREAUX: Someone who grew up loving fantasy, not just one small brand of fantasy, but all forms: video games, cartoons, role playing games, movies and books. I have also found that people who enjoy female protagonists enjoy my writing.

I tend to write for people who like things fast paced and action packed.

KEVIN JAMES BREAUX: Got a few hours? It's been a long road. My feet are still bleeding from the march. Okay, let me take a deep breaths here and I will try and break this down to as brief a statement as I can so not to bore people.

I started writing in 1998 during college and yes, I remember the days that all query letters were sent by the mail and you supplied a SASE for your form letter 3x5 card rejection letter. I kept all mine...I still have them.

I began seriously writing in 2003. By that I mean I was focused on a goal and I was structuring my time writing, although still part time. In 2005 I met my mentor Jonathan Maberry and wow, he taught me a lot. If you are not aware of the guy, look him up. He is skyrocketing.

I sold (for actual real money!!!) my first short story, a zombie horror about two girls trapped in a bathroom at a party during an outbreak, in 2007 to a web site and then followed that up with at least 2-3 short sales a year.

By 2009 I began writing full time and I sold my first short story into a printed anthology, which brings me to 2010 when I inked a deal with the small press publisher, Dark Quest Books, for the Soul Born Saga.

To date I have four completed novels (not all in the Soul Born Saga) with another two nearly done. Only Soul Born is available, but the sequel will be out this winter. Keep watching www.soulborn.net for more info.

KEVIN JAMES BREAUX: I tend to write five or six days a week and about four to six hours a day. With limited social media interruptions I cover a word count anywhere between one thousand and three thousand words. On the weekends I am working on projects like scripts and blog updates. I have been taking on more monthly guest posts and articles lately too, so I need to factor those into my schedule.

I have found I can complete 2 books a year if I write full time and stay focused.

KEVIN JAMES BREAUX: I enjoy authors who, although are rising up, still take time to reach down and help up their fellow writers. Jonathan Maberry is one of those. So is Greg Frost and Jim C. Hines.

KEVIN JAMES BREAUX: As a modern day author you need to market and promote your own work, regardless of whatever your publisher is or is not doing for you. Readers want to see authors out there connecting with the public, and by that I mean more than the normal self promotion tweets. Authors need to converse with readers, answer there emails and mentions. As an artist, my goal has always been to create something that people would love and want to talk about. Especially talk to ME about. Yes, we are all busy with deadlines, but remember...you would not have deadlines without the readers, so be kind and talk to them...and at the very, very least, follow back.

KEVIN JAMES BREAUX: Because that is where the future is. I mean I am old school, and I like to read from actual physical books, but I think my kind is a dying breed. All reports point toward ebook sales going up and up and up.

KEVIN JAMES BREAUX: Well, I believe you have not lived as an author until you have been rejected in at least a dozen rounds of query submissions. What's the rush? Hire an editor. Work up to your fifth, sixth or seventh draft, then have multiple test readers give it a run. Query that bad boy again, then if all else fails...

Kevin James Breaux is an award-winning author and artist. He is a member of the HWA and EAA. Along with having written many short stories, Kevin's debut novel Soul Born, an epic fantasy, was published by Dark Quest Books in 11/2010. Soul Born is book one in a three book series that can be easily read as a standalone or a launching point to the trilogy. He is currently seeking representation for an Urban Fantasy novel, a Sci-Fi Fantasy mash-up and a YA novel. Kevin lives in a man cave outside of Portland, Oregon.