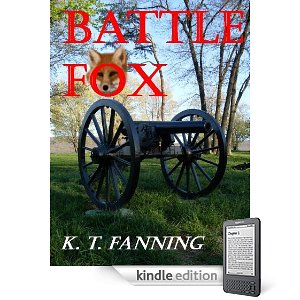 Kathleen Fanning, author of Battle Fox, discusses her book, her journey as a writer, and self-publishing on Kindle.

DAVID WISEHART: What can you tell us about Battle Fox?

KATHLEEN FANNING: Battle Fox developed because I was curious about the enigma who was my great grandfather. He was the son of immigrants, his father from the Black Forest of Germany, his mother from Alsace. All who knew him were long gone, leaving behind only a vague sketch of his life and a faded tintype. One night a vivid dream of two Union soldiers in a flaming forest woke me up, and I wrote it down. At that time I did not know that my great grandfather had fought in the Civil War, but I knew the dream was about him and I was determined to find out what it meant.

Through arduous research into the genealogy and roots of his story, I procured a copy of his Civil War military record from the National Archives and embarked upon a fascinating journey of discovery. I followed his regiment’s path, walking every battlefield, every campground, and travelling every road and byway in the footsteps of the Sixth New Jersey Volunteer Infantry in which he served. My extensive historical research included combing the shelves of the Library of Congress.

Research began at the Meridian Hill training ground in Washington, D.C., which is now a neighborhood park, and ended at the site of his last battle, the Wilderness outside Chancellorsville, where he was wounded as a terrible fire blazed through the thicket around him.

I discovered the story of a heroic young Patriot and the rich history of Civil War contemporaries. Battle Fox is the tale of Adam, a Billy Yank, and his experiences in the war. Concurrently, the fantasy element of a fox spirit woman, a shape-shifter named Copper, became a part of young Adam's story. When I combined his history with Copper’s fantasy, Battle Fox came to life.

KATHLEEN FANNING: My great grandfather and I shared the same birthday 105 years apart, so it was easy for me to develop young Adam’s character as he would have had many of my own attributes and personality traits. I thought back to when I was 18, and there was Adam.

My characters are frequently drawn from people I have known, either directly or as composites. When I am writing a character I walk in his shoes, and my characters reveal themselves to me in this way. Often they come to me in dreams to correct some aspect of their personalities which enhances them in surprising, delightful ways.

KATHLEEN FANNING: My ideal reader has eclectic tastes, curiosity, a healthy imagination, loves a good story, and knows that if you have a good book to read you are never bored and never alone. My ideal reader is not married to genre, but to quality.

KATHLEEN FANNING: My journey as a writer began with my journey as a reader. I was born into a house filled with books. My earliest memory is sitting on my mother’s lap in the creaky old rocking chair while she read poetry to me. Every night after work my father sat me on his lap and read stories to me, wonderful stories. My brother read to me. My sister read to me.

I used to open the glass doors of my favorite bookcase in the front hall, pull out a book and look at the pages, longing to know what story the words told. I could not wait to learn to read, and once I did I was never without a book wherever I went.

One of my family’s favorite things was a community book sale. In those days, you could pick up books for as little as a penny, so we would come home with shopping bags and arms full of books. Every town had a yearly book sale, and we went to them all. In this way I was introduced to some of the finest writers of all time. One of my happiest memories is of a warm summer afternoon when I sat by a waterfall on my way home from the library and read Kipling’s Kim cover to cover.

I wrote my first book in pencil when I was nine years old, home with the flu. It was called A Rainbow for Susanna, and was a shameless rip off of Pollyanna with a modern twist. I read it to my mother as she prepared supper, and I can now forgive her for the parts where she could not help laughing.

I always wanted to be an author. For many years I only wrote poetry. Lyrical writing flowed easily because I loved to sing. I won the all-school poetry contest three years in a row in sixth, seventh, and eighth grades.

I was in my forties when my teenage daughter challenged me to stop wishing that one day I would write the great American novel and do something about it. She told me about a night school class at her high school. I accepted her challenge and joined the read/critique workshop, dashing off a hurried first chapter to read that first night. The class was fun and enlightening. Chapter followed chapter until at last my first book, Atlantean Knights, was born.

KATHLEEN FANNING: Each book so far has come out of a dream. The process begins deep within me, therefore, and the dream which inspires the book usually becomes a chapter within it. I know how the book begins and how it ends. The writing illuminates the void in my mind which is the rest of the plot, developing in a surprising way as I write.

Since I enjoy writing historical fiction, I research, research, and then research. I organize all my research in three-ring binders by subject. Battle Fox filled up six of these 4-inch binders. Then I outline with the understanding that the creative process may lead in an unexpected direction. Once I sit down to begin, I write directly on the computer, format as I go, and revise each chapter at least three times before I go onto the next. It’s important to me to get it down on paper, however rough it may be, and go back and polish it later.

My books go through at least three or four drafts. Many times the story as it develops calls for further research, so I am usually researching and writing at the same time.

I wish I were so disciplined that I could have a set time each day to write, but I have a full-time job, so I cannot. One day when I am famous and can quit my day job, I shall write early in the morning and devote several hours a day to the craft. Now I write, as the Irish would say, “when the fit is on me,” which might be in the middle of the night if a dream wakes me up with an idea that will make the story or a character pop.

There comes a point for me in the writing where the work takes on a life and momentum of its own, and that is the part I like best because then the book begins to write itself and I am like a channel through which the story flows. I love that.

KATHLEEN FANNING: Bridges of Madison County. I am not a fan of that book, but I shall attempt to be polite and not say what I think of the plot and writing. I wish I could knock off barely 100 pages and make millions for it. The same goes for Love Story.

KATHLEEN FANNING: I have only just published Battle Fox last week, so I have much to learn and apply when it comes to marketing. So far I have highlighted it on my author webpage: http://www.ktfanning.com, created a facebook fan page for it, and am in the process of letting people know it’s out there.

At the turn of the century (2000/2001) I published my first two books, Atlantean Knights and Once Over Lightly, with a print-on-demand publisher. I appeared on a local television talk show to promote them and was lucky enough to secure book signings in a few Borders and Books-a-Million stores before they shut out print-on-demand authors. In addition, I convinced local newspapers to do articles on my books, and in one case my picture with my book made the front page (yes—it is a small town). I also did readings at a senior center.

KATHLEEN FANNING: “While your work is unique, very well written and interesting, I am sorry it is just not for me. Please understand this is very subjective, and good luck submitting your book elsewhere.” Signed, the agent. Need I say more? Honestly, if you don’t know how to market a book or sell it to a publisher then why are you an agent?

That said, I decided it was high time I joined the 21st century, and it looks to me like e-publishing is the wave of the future. I published with Kindle and Smashbooks because I want my books in the hands of the readers. I would much prefer readers to decide if they like my books rather than an elite clique of people sitting in their offices on Park Avenue who seem to have all but closed the publishing world, with few exceptions, to long-established best-selling authors or celebrities.

Print-on-demand has become an expensive proposition, and I do not hold 100% rights to my books. The publisher wants hundreds of dollars to format and submit my two existing books to Kindle or other ebook venues, something I am perfectly qualified to do myself free of charge. When I am ready to publish my first two novels as ebooks, I have to cancel my contract to get them back and create my own covers as I do not have rights to the cover art they provided. Also, my royalties are only 20%. I have always been an independent person. I love the idea of being an indie author.

KATHLEEN FANNING: What have you got to lose? You retain control of your precious work. You are free to pursue a printed venue and continue submitting to the establishment should you wish. And, frankly, in the process of submitting your work as an e-book, you will learn a lot about formatting, marketing, and the business side of being an author. Wouldn’t it be wonderful if a publisher approached you asking to publish your book instead of the other way around?

K. T. Fanning was born in Montclair, New Jersey, on the first day of spring. She has lived in Oklahoma, Colorado, Illinois, Northern California, Southern California, and currently resides in the beautiful northern Shenandoah Valley of Virginia.

The author's adventures have taken her to most of the contiguous United States, both coasts of Canada, Nova Scotia, Mexico, Scotland, England, France, Egypt, and the Bahamas.