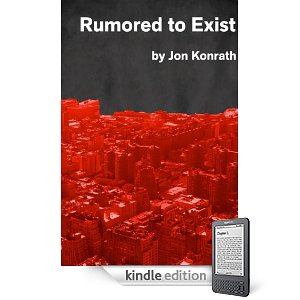 Jon Konrath, author of Rumored to Exist, discusses his book, his journey as a writer, and self-publishing on Kindle.

DAVID WISEHART: What can you tell us about Rumored to Exist?

JON KONRATH: It's a postmodern novel, a collection of 201 vignettes arranged in a loose non-linear narrative. It started with a bunch of these shorter pieces, and then I saw that Linklater movie Slacker and realized I needed to structure a book like that. It's filled with dark humor, absurdism, and parody, and set in a bizarre near-future world.

It's not exactly genre fiction, so it's a hard book to pigeonhole into a category, but it's like Naked Lunch in that it fits between sci-fi and experimental fiction. I originally self-published the book in 2002 on iUniverse, and just recently published the ebook version on Kindle and with Smashwords.

JON KONRATH: When I was in grade school, we did this thing call Future Problem Solving, which was a program where you had competitions based on a brainstorming process. You'd get a topic, and your team would have to find challenges or problems with the scenario, select the most consequential problem, and come up with a list of solutions for the problem and criteria for judging the solutions

What it taught me was this methodology for taking a character, analyzing their situations and problems, and developing how they would react. Like say you have a character, and he's a farmer. Well, why is he a farmer? Is it a family business? How's the money? Does it change his political views? Did he want to be something else as a kid? I'd explore these things, trying to find the best way I could throw the required conflict in front of the characters, and build their motivation to overcome this.

JON KONRATH: Someone with a sick sense of humor that had a serious prank call habit before caller ID made it significantly more difficult to troll your local politician posing as an irate octogenarians convinced that The Wheel of Fortune is a communist propaganda tool.

JON KONRATH: When I was in college, drifting out of a computer science degree, I endured this long and protracted depression and introversion, and started keeping a journal. This led to the typical Charles Bukowski/Henry Miller/Henry Rollins phase, which got me reading everything I could find, trying to get a book started. I wrote short stories, not to publish or submit, but just to create something. I couldn't paint or draw, and guitar didn't really work out, but I found I could make people laugh with writing.

I never thought about writing to sell, and fell into a career as a technical writer, moving to Seattle during the Internet boom. I started a homepage before anyone heard of the Internet, found a photocopier at work that I could abuse, and started publishing zines. By the time my first book was done, iUniverse and print-on-demand were just starting, and that seemed like the next logical step to me.

JON KONRATH: I have this huge bank of notes I call "the plot-o-matic", which is every loose thought that could ever end up in a book: character names, offbeat wikipedia articles, obscure research topics, little fragments of prose that sound cool. It all gets sorted and the pieces coagulate together into index card-sized bits of writing, which then slowly get shuffled into outlines and first drafts.

I used to do all of this by hand, on paper and with a bunch of text files, which was agonizing. I've recently started using Scrivener, and it has absolutely revolutionized this process for me. I feel like I've spent the last twenty years using a hand saw and was given one of everything in the DeWalt power tool catalog.

JON KONRATH: Mark Leyner is a huge influence, the way he can take off on ten different tangents at once. Raymond Federman is my other favorite from that FC/FC2 school of experimental writing. I love the manic energy of Hunter S. Thompson, especially during a good rant. And Philip K. Dick's been a favorite lately. Comedy is a big inspiration too from guys like Bill Hicks to sketch comedy like the Upright Citizens Brigade.

JON KONRATH: Raymond Federman's Take It or Leave It. The structure of that book is so amazing, and I love how he weaved together pieces of his own life into this metafiction structure that's both complex and amazingly funny.

JON KONRATH: I started in the days when social networking was pen and paper and stamps and writing to strangers you found in Factsheet Five. So now it's the e-version of that: Facebook, Twitter, a web page, blogging. This book is a hard sell, because it's not genre fiction, and there aren't scores of websites teeming with readers eager to snap up the newest experimental fiction. But it's also been easy to break a book like this into short excerpts to publish on the web, and I've been doing a lot of that.

JON KONRATH: Part of it comes from actually getting a Kindle. After reading on that beautiful e-ink screen, I had to get my existing paper books onto it. I still own the rights, so the only hassle was the actual formatting. Once I got started with Scrivener, all that hard work is taken care of after messing with a few of the compile output settings.

I also like the idea of not having a middle-man between me and the reader. This isn't a book I'd be able to easily take to a publisher, so it's given me a chance to put it out there for readers, which is awesome.

JON KONRATH: Everyone you've interviewed has probably said the same thing about editing and cover images and all of that, so I'll skip it.

A while ago, I emailed Raymond Federman to thank him for his great books, and he gave me a bit of writing advice that he said he got back in 1966 in Paris when he was having lunch with Samuel Beckett. Beckett told him, "If you write for money, do something else. And never compromise your work." Don't look at the Kindle as a way to make money fast, because you'll be sorely disappointed. Use it as a platform to reach out to people and share with them your true work, and it can all be worthwhile. 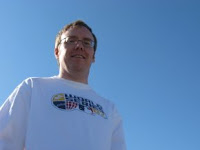 Jon Konrath self-published his first book, Summer Rain, in 2000. He has published five books, and was the editor and publisher of the literary journal Air in the Paragraph Line for 13 issues.

He can be found at rumored.com.