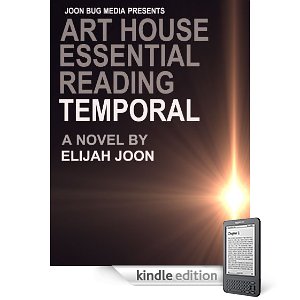 Elijah Joon, author of Temoral: A Novel of Consciousness and Time, discusses his book, his journey as a writer, and self-publishing on Kindle.

DAVID WISHART: What can you tell us about Temporal?

ELIJAH JOON: The novel is a post-modern literary comedic drama about the relationships between life and art, memory and dreams, and temporal as well as eternal concerns in the increasingly alienated (and alienating) twenty-first century.

A disillusioned young office worker finds his only solace from a mundane and empty life by prank-calling suicide hotlines and stealing merchandise from Walmart to sell on Ebay—that is, when he's not busy killing Starbucks baristas while mourning his lost love. He attends his high school reunion and meets up with old friends and enemies. Meanwhile, a patient escapes from the hospital intent on tracking down a man haunting his dreams. A soldier in Iraq prays for death to end his suffering after he survives an enemy blast. All three men wonder what the meaning of life is for them when hope seems a myth and everything is amiss.

Along the way, Stephenie Meyer books are destroyed in Borders Bookstores and Dan Brown just might get kicked upside the head.

All these and more as seen and interpreted through the mile-a-minute pop culture mind of a true American psycho-slash-intellectual and sensitive soul.

Some praise received from celebrities for my writing:

"Had a wonderful time reading it. I feel you have such a gift as a writer and look forward to your [future] work."
—Sung Kang, film actor most known for playing "Han" from Better Luck Tomorrow, The Fast & Furious: Tokyo Drift, Fast & Furious, and the smash hit of 2011's summer movie season, Fast Five (he was also in Antwone Fisher, directed by Denzel Washington)

DAVID WISHART: How do you develop and differentiate your characters?

ELIJAH JOON: I’ve read authors who would spend so much time dedicated to describing their characters’ physical looks, but their personalities are flat or worse, cliché and two-or-one-dimensional.  By contrast, the characters in my books are not described very much in way of physicality, but their dialogue and actions make their personalities jump off the page, especially when there are two or more of them engaged in back-and-forth dialogue.

DAVID WISHART: Who do you imagine is your ideal reader?

ELIJAH JOON: There’s the famous quote by the great novelist F. Scott Fitzgerald that goes, “The test of a first-rate intelligence is the ability to hold two opposed ideas in the mind at the same time, and still retain the ability to function.”  This is my ideal reader.  As an author, I can write artistic, literary prose with important ideas and topics while at the same time I’m able to enjoy writing ultra-stylized and flashy gangsters in comedic action crime stories akin to a Guy Ritchie movie.  Again, the same author being able to serve two completely different types of audiences: the art house crowd as well as the “popcorn” crowd.  I’ve found audiences who were able to balance these two seeming opposite tastes easily tend to be more culturally well-read and open to embracing new ideas and trends, so this is also the type of audience that would be able to pick up on the themes I like writing about in my novels.

DAVID WISHART: What was your journey as a writer?

ELIJAH JOON: I was always writing from a very early age and did some uncredited screenwriting for a while, and tried to get my own feature greenlit with some interest in the past, but things didn’t pan out.

I eventually found that if you want your work to be made, you cannot waste time trying to get other people to give you a chance to prove yourself or you’ll waste so many years you cannot get back.  That’s why my film partners and I wrote, produced, directed and made our own feature-length independent film in 2010 called Focal Point.  It was a liberating and fun experience, and our film has its IMDB page here: http://www.imdb.com/title/tt1727268/

After I found out that a once-trusted associate was submitting my work in his name, I decided to take charge and put my own writing out on the Internet as a way to protect my intellectual property.  Publishing on the Amazon Kindle platform for my unpublished narrative prose work was a no-brainer after that, and the timing was right.

DAVID WISHART: What is your writing process?

ELIJAH JOON: Sylvia Plath wrote in her journal, "I write only because there is a voice within me that will not be still."  In the past, I wrote for the sheer necessity that I had to, from an artistic standpoint.  After years of being unable to sell my work the traditional way, I burned everything I ever wrote and these days am only motivated to write if I’m commissioned to or feel I can possibly get people on board to film something for a project.  When I get that passion though, I write some great material very, very quickly.

Everything I currently wrote to upload on Amazon Kindle took me about a week total to write.  That’s at the same time, and we’re talking hundreds of pages, and that’s not even including the screenplays I’ve had celebrities such as Tim Kang from the CBS TV series, The Mentalist have his agent Anna discuss working with me on.  Other than that, I don’t have a process other than being motivated by pure passion.  That’s the best way of working, in my opinion, because it provides the circumstances where the material literally writes itself at an astonishing rate.  It’s also the process that John Lennon and Paul McCartney said they used in writing their most beloved songs, including “Eleanor Rigby.”

DAVID WISHART: What authors most inspire you?

ELIJAH JOON: My heroes in writing have been the screenwriters, since I wanted to become a writer because of movies I grew up watching.  Rod Serling wrote amazingly dramatic, intelligent, and for the time, subversive content that pushed the boundaries of television in the 1950s.  Paddy Chayefsky was another contemporary of Serling’s who started in television and became a legendary screenwriter and multiple-Oscar winner.  Television writing really inspired me as a writer, because it is constantly being called “the writer’s medium,” where the writer is actually the king.  In modern times, David Chase (The Sopranos), Alan Ball (American Beauty, Six Feet Under), Aaron Sorkin (The West Wing), and David Simon (The Wire) have all elevated what the medium can do, and have brought much attention to what can happen if a writer is given creative control over their material on a grand scale and in a visual medium.  It’s been my dream to write on a series ever since.

DAVID WISHART: What one book, written by someone else, do you wish you'd written yourself?

ELIJAH JOON: Even though this is a cartoon strip, Calvin & Hobbes by Bill Watterson was always extremely poignant, moving, thought-provoking, and timeless.  I wish I wrote the swan-song of his landmark series, It’s a Magical World.  It’s such a life-affirming work, and one of artistic integrity, as Bill Watterson was always battling his own syndicate over refusing to bastardize his work by licensing out to soulless corporations’ products.  Bill  Watterson is a genius and his work with Calvin & Hobbes is a masterpiece that is appreciate the world over.

DAVID WISHART: How have you marketed and promoted your work?

ELIJAH JOON: The usual online stuff every other Kindle author is doing.

DAVID WISHART: Why publish on Kindle?

DAVID WISHART: What advice would you give to a first-time author thinking of self-publishing on Kindle?

ELIJAH JOON: I’m in no position to give any advice, whatsoever.  I still have much to learn.  Although I’d probably tell them that luck is something that has a lot to do with success in anything.

DAVID WISHART: Thanks, and best of luck with your books.

Elijah Joon is the young author of the artistic literary novel, Temoral: A Novel of Consciousness and Time, the poetry collection, Psalms Amidst Lamentations, and the action-comedy series, Arhnuld Brawnswagger: Austrian-Accented Action Guy.

He holds a degree in Psychology and is the Co-Screenwriter and Associate Producer of a 2010 feature-length independent film entitled, Focal Point.

Independent music artist, Ken Oak (of Oak & Gorski, previously known as the Ken Oak Band), says the following for Austrian-Accented Action Guy: "Elijah Joon has resurrected the @$$-kicking Arnold [Schwarzenegger] of yesteryear and spliced his DNA with the dark sadism of Gary Oldman."

"The action is amazing and very exciting... F***ing awesome!"
—Fernando Chien, film actor (Felicia Day's The Guild: Season 2 and the 2011 blockbuster, Fast Five) and professional Hollywood Stuntman on such films as Pirates of the Caribbean: At World's End and the acclaimed Fox TV series, 24.

Temporal is available at: