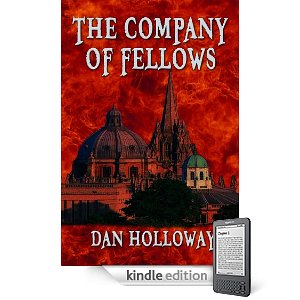 Dan Holloway, author of The Company of Fellows, discusses his book, his journey as a writer, and self-publishing on Kindle.

DAVID WISEHART: What can you tell us about The Company of Fellows?

DAN HOLLOWAY: Basically it's what a Hannibal Lecter novel would be like if it was set in Oxford university. I came to Oxford as a student in 1989 and never left. There's so much boiling away beneath the University's surface, but it struck me the novels set here like Morse and The Oxford Murders were very genteel, focusing on the traditions and formalities of the place and the intellectual side of Oxford folks. I love those books, but the truth is that people here have dark streaks and hidden lusts just as wide as anywhere else. I wanted to keep the tradition and the fine living, but use it as a backdrop for something much darker and more gothic, more in the Val McDermid or Minette Walters vein.

The specific idea of transposing the Lecter feel to Oxford (which I hope comes through in Sessha Batto's stunning cover) came when I was preparing for Mastermind back in 2006, for which my specialist subject was the Hannibal Lecter novels (it was great—I wrote rather cheekily to Heinnemann and they sent me a freebie of Hannibal Rising, which was just out).

DAN HOLLOWAY: I'm very visual. Which is odd because I rarely describe characters' appearance. I tend to see their foibles and tics, and those are what I write down. Unlike my more literary books, The Company of Fellows is written from several points of view. I got "into character" before starting writing by listening to the same CD each time I wrote the same character. Tommy had Skunk Anansie's Stoosh, Rosie had Rammstein's Mutter, Emily had Coldplay's Rush of Blood to the Head. If I never hear "Clocks" again it will be too soon.

DAN HOLLOWAY: I don't. I think thinking about readers does both them and your characters a disservice. I write the story as it should be and hope someone will like it. If they do I'm generally amazed. Whenever I try to imagine who'd read my books I'm surprised by a message from someone utterly different so I stopped imagining—it's too narrow-minded. What I do love is nattering with readers on twitter.

Um maybe I should say the one quality a reader should have is not being too shockable (I read at Literary Death Match last year. Molly Parkin told me she loved the story—The Last Fluffer in La La Land, yes it is about exactly what it sounds like it's about—and one of the other judges told me she couldn't look me in the eye). But then again if someone kicked up a real fuss about one of my books maybe it'd be the making of me.

DAN HOLLOWAY: About 25 miles each way on the bus. Literally. I write while I commute. And now that I have a skin with the cover of The Company of Fellows on my laptop, I can call it marketing as well.

I don't think there's anything unusual about my writing history. I wrote adventure stories from about 8 to 11, then I wrote morbidly self-indulgent gothic poetry and fantasy as a teenager, thought I was the next Kundera as a student, and finally settled down to write something that wasn't utter drivel in my early 30s. One thing that's never changed is that whatever piece from my past I look at, I always spent alot of time describing the food.

DAN HOLLOWAY: 1000 words a day and plan 5 chapters ahead. As well as the bus, I write in cafes and, if the sun's shining, on the street. I'm happiest writing on a busy street, sitting on the pavement with my back resting on the wall and my headphones on.

DAN HOLLOWAY: Cody James, Penny Goring and Katelan Foisy. Each of them has changed my life in one way or another. They taught me to write what needs to be said not what you're told to say. They taught me the importance of truthfulness in writing. And they taught me that truth in writing has nothing to do with facts.

DAN HOLLOWAY: I'm very lazy and having worked in luxury retail I'm very bad at hard selling. I use the fact that soft selling worked in that field to hang out online swapping recipes with people and call it marketing. I love twitter (http://twitter.com/agnieszkasshoes). I also love writing articles and reviews. I write for various writerly sites like the Self-publishing Review, Spectator Arts Blog, Pank, and Loudpoet. I write music reviews for The Indie Handbook and I've done interviews and guest posts places like Writers' Digest. I also run a column for other thriller writers on my thriller blog called How Long is a Piece of Rope, which is based on my love of doing offbeat interviews with people. And I have a regular social media and how to do live readings column for writers' mag Words With Jam (http://www.wordswithjam.co.uk)

I started a collective very early on—Year Zero Writers (http://yearzerowriters.wordpress.com)—where we post short stories and contentious articles. It's a showcase for uncategorisable contemporary fiction and poetry. We struck lucky very early by getting recommended by the indie mag Nylon, and have a healthy fairly following. Healthy enough to get mentioned from time to time when people talk about collectives.

I also started the multi-art project eight cuts gallery last year (http://eightcuts.com) which is part publisher of alternative fiction, part online multi-art hyperlink-curated gallery space (we've had two exhibitions so far), part soapbox for alternative arts (we run a prize for people trying to break down barriers in the arts in hoour of Chris Al-Aswad, the founder of Escape Into Life, who died last year).

Most of all though I do live shows. As a storyteller nothing can beat looking your audience in the eye and watching the reaction as you mess with their heads. I was very lucky to get in at the start of the rise of the literary event, so I've got to do events like Literary Death Match and Brighton Fringe's award-winning Grit Lit simply by asking, which has sort of snowballed. I'm also lucky to have a group of writers I met online who live close enough that we can offer venues a whole show. And doubly lucky that I have music connections, so we can throw in great bands. As a result we've got to have shows at places like Rough Trade and this summer we have a show that's playing at Oxfringe and Stoke Newington Literary Festival. There are also amazing venues in Oxford—I have a regular show at the Albio Beatnik and the O3 Gallery lets me put on tie-in shows with the eight cuts gallery exhibitions. Anyone who's never done a reading, do it. Most towns have an open mic night you can just pitch up at, and audiences are almost always warm and supportive.

DAN HOLLOWAY: It's so flexible compared to places like Smashwords—you can tinker till you get it right. And there's such a good infrastructure for readers on the web—places like this, like Kindleboards and Daily Cheap Reads.

DAN HOLLOWAY:
1. Make your book the best it can be so any customers become repeat customers
2. Get a great cover
3. Write a pitch that's better than the book
4. Write more books. Quickly.
5. Don't ever be a plank online.

DAVID WISEHART: Thanks, and best of luck with your books

You can find out all about Dan's articles and other books at http://danholloway.wordpress.com and there are details of The New Libertines tour at http://eightcuts.com. When not working, writing or hanging out on twitter, Dan can usually be found cooking or listening to loud music in a dingy club. But he is most at home behind a microphone, or better still in front of a camera.