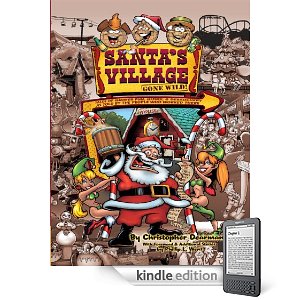 Christopher Dearman, author of Santa's Village Gone Wild!: Tales Of Summer Fun, Hijinx, & Debauchery As Told By The People Who Worked There, discusses his book, his journey as a writer, and self-publishing on Kindle.

DAVID WISEHART: What can you tell us about Santa's Village Gone Wild!?

CHRISTOPHER DEARMAN: Santa's Village Gone Wild! is a revealing look at some of the fun, hilarious and outrageous stories that took place during the over forty years the theme park Santa's Village in Dundee, IL was open. Summers spent working at Santa's Village was a right of passage for thousands of high school kids growing up in the Chicago suburbs. It was to teach responsibility and life lessons, while bridging the gap from adolescence to adulthood in a safe environment. The book now lifts the curtain and shows what REALLY went on...

I share some of the behind-the-scenes stories of my two seasons spent working in the hot summer sun, and all the hijinx and debauchery that went along with it. I also collected quotes & memories submitted by numerous employees that paint an unforgettable overview of some of the coming-of-age tales that could only have happened if you were one of the lucky ones to have worked at Santa's summertime home.

It has a historical outline spanning the nearly five decades the park was open, and you'll learn some fascinating and eye opening details never revealed before including: Shocking secrets of the frozen North Pole, a candid interview with longtime Santa Phillip Wenz, stories from the notorious after-hour parties, as well as answering questions like: How much hanky panky went on at the park? Did a former employee steal enough $ to buy a car? Were there contests to cause "protein" spills? Did the Fire Truck ride really have no brakes???

Completely unauthorized and uncensored, Santa's Village Gone Wild! unveils some of the secrets and stories of summers spent sweating in the hot sun working for minimum wage and food tickets that would make just about anyone "go wild".

CHRISTOPHER DEARMAN: Being a non-fiction book, the only "characters" would be myself and other former employees. That said, being I confess to dozens of embarrassing things from my past, I sometimes wish it was a work of fiction—especially after my parents read it!

CHRISTOPHER DEARMAN: I would say it is a must read for anyone that ever visited the amusement park, or for those just curious to know what goes on behind-the-scenes of one. Also, if you just want a fun book to read, I guarantee you'll laugh& smile numerous times!

CHRISTOPHER DEARMAN: For this book, the concept originally came to me while surfing on Facebook. I kept seeing people I used to work with at Santa's Village, and all these funny memories came flooding back. I decided to see how many of these stories I could remember, so I sat down with a bottle of wine, and pen & paper, and began to right down as many fun memories as I could. I came up with a couple dozen in about a half hour, and I thought to myself, if I can come up with so many that quickly, I imagine other former employees could do so as well. It all sort of snowballed from there.

CHRISTOPHER DEARMAN: I like to write down as many simple ideas as I can, and then go back and flesh them out over time. Once I get a bunch of stories written, I then sit down & piece them together in a way that is hopefully entertaining, and flows smoothly.

CHRISTOPHER DEARMAN: I'm a big fan of Chelsea Handler's books. She's hilarious, and I like the fact that she doesn't hold anything back when confessing some of her sometimes embarrassing tales. If something is funny, whether it be politically correct or not, she throws it out there for the world to read. You gotta love someone with a "I don't give a damn" attitude.

CHRISTOPHER DEARMAN: Well, there is a book that came out early last year called Cast Member Confidential—written by Chris Mitchell that I kick myself for not writing. I did an internship at Disney back in college, and was actually going to write a similar book of my own tales once I finished the Santa's Village one. His book was definitely entertaining, but it sucks that he beat me to the punch. Because of this, I decided to tackle the rest of my college days at Southern Illinois University instead, and might just include a chapter on the Disney stuff. That book is going to be called: Carbondale Gone Wild!—Tales of college fun, hijinx & debauchery as told by the people who survived it.

CHRISTOPHER DEARMAN: The majority of the promotions so far have been getting interviewed in most of the local papers right before Christmas. Santa's Village was beloved for so many years in the Chicagoland area, and being it ties into the Christmas holiday nicely, I found that there usually was at least one reporter at each newspaper that visited the park & wanted to hear some of "the dirt". I also have found success with Facebook & Twitter in getting the word out, but I'm looking for other outlets as I go. There is a lot of trial & error to what works, and what doesn't, but you just got to keep trying to get the word out anyway you can.

CHRISTOPHER DEARMAN: I got on Kindle a little late in the game. I was so anxious to get the paperback out there, that I decided I would get the word out about it being available on Amazon & my website www.santasvillagegonewild.com first, then work on the Kindle & other ebook versions after. Because of this, I most likely missed out on a ton of sales when all the newspaper articles were coming out. Kindle isn't going away anytime soon, so I suggest jumping on board as soon as possible!

CHRISTOPHER DEARMAN: While I'm still learning more about it as I go, I would suggest keeping the price $2.99 and lower. I originally had a higher price and wasn't getting that many sales, but once I lowered it, I've found the sales consistently going up every week.

After spending his informative years in his birthplace of Elgin, IL, Christopher Dearman has called Dundee, IL, Carbondale, IL, Orlando, FL & Huntley, IL "home" at certain points in his life...

Graduating from St. Edwards High School (which is a story in and of itself), he took his talents to Carbondale, Illinois (with a Disney internship mixed in), where he spent five years nurturing his creative muse (while trying not to kill too many brain cells).

Spending the last decade working as a banker & underwriter, Dearman decided it was finally time to confess some of his amusing life stories for all to read in Santa's Village Gone Wild! and the upcoming Carbondale Gone Wild!.

As creator of the the full-color graphic novel Blackout Drunk & spin-off comic strip Blackout Skunk, Christopher Dearman continues to shun political correctness, while trying to entertain the masses with his precarious prose.

Christopher Dearman or his creative endeavors have been featured in: USA Today, the Chicago Sun-Times, TimeOut Chicago, and authored the books: Santa's Village Gone Wild! (available for Kindle and print) & the upcoming Carbondale Gone Wild!