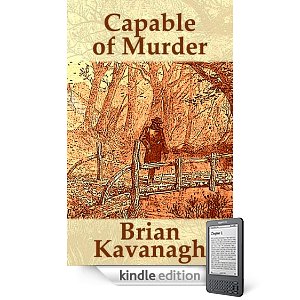 Brian Kavanagh, author of Capable of Murder, discusses his book, his journey as a writer, and self-publishing on Kindle.

DAVID WISEHART: What can you tell us about Capable of Murder?

BRIAN KAVANAGH: Capable of Murder is the first book in my Belinda Lawrence mystery series. It came about after a friend inherited a cottage outside the English city of Bath. Over the years, whenever I was in England, I always visited and stayed so I got to now the cottage and the location very well.

It had a history, being a very old area, and after some thought I began to fashion a story around the cottage and village. I decided that it would be a mystery dependent on characters and intrigue and not hard boiled or a police activity novel. The central character I made female, Belinda Lawrence. As I’m an Australian author, I made Belinda a young Australian woman, aged about twenty-five, who has been living in Europe and is about to return home to Melbourne when, upon the death/murder of her great aunt, she inherits a cottage in Somerset. It has long been a tradition for young Australians to head to Europe, England in particular, after they finish college or university, so drawing on that Belinda was a familiar figure, at least to Australian readers and to those in Europe who had experienced Aussies visiting their country.

From the start I wanted to include some historical fact, event or item, which was at the basis of the story but always in a contemporary setting. The antique business seemed an ideal springboard for this and so Belinda eventually meets up with an older woman, Hazel Whitby, who runs some antique shops and the two women become friends. There is a mild element of romance involving Belinda and her male friends, but the story and the series is strongly in the female, amateur sleuth genre.

BRIAN KAVANAGH: Given that Belinda began aged twenty-five it allowed for her character to develop as the series progressed. Each book is a stand-alone but there is continuity of relationships throughout the books. Belinda’s character is probably, although not necessarily consciously, based on a female friend of mine, being young, attractive and adventurous.

Hazel Whitby was conceived as a minor character in Capable of Murder, but it became apparent that she wasn’t keen on being surplus to requirements and her larger-than-life character created a good foil against Belinda, so she took on a co-adventuress role in the series.

Mark Salinger is introduced in the first book and the reader is asked to consider his intentions towards Belinda. His character is fleshed out in the following books and becomes an important element in the story telling.

BRIAN KAVANAGH: Female. Probably. It seems that women make up the bulk of readers for contemporary fiction and given the nature of Belinda’s adventures they have some affinity with the central character. Hazel, being a little older, is attractive to the older female reader, that is, if they appreciate her sometimes outrageous behaviour. So Belinda for the younger readers and Hazel for those with more experience of life! But the books are also aimed broadly so, as straight out mysteries, there is no reason why male readers shouldn’t enjoy the puzzles that are the backbone of the stories.

BRIAN KAVANAGH: I didn’t set out to write a series. My working life has been in film production but over time, for various reasons, the opportunity to make films dried up. In searching around for other interests, I decided to try my hand at writing a mystery. Capable of Murder is the result. But it became obvious to me on completing it that there were further stories to tell. As I had written film scripts and worked on fictional feature films, I had been in the story telling business for many years, so I drew on that experience. I believe that my writing abilities increased with the publication of each book as I grew to know my characters better and I had confidence in what I was doing. I also enjoyed the writing process.

BRIAN KAVANAGH: Haphazard, I would say. From a basic idea for a story I usually work out a loose storyline. I may start writing but put it aside, sometimes months, but the story is always percolating in my mind. Then suddenly I get a writing spell and will revisit the work and continue writing over a matter of weeks until I have a complete work. I then go back and revise and correct and sometimes alter events and characters. I don’t always follow my original storyline in a linear fashion. Sometimes I know the resolution; sometimes the characters and the developing story leads me there. I like to keep it fluid and fresh, so that what happens is a surprise to me as it should be to the reader.

BRIAN KAVANAGH: As I read mostly mystery fiction these days I admire the work of Simon Brett, Hazel Holt, Agatha Christie, M.C.Beaton. Also I’m revisiting Josephine Tey. I also like Barbara Pym. I tend not to read ‘best sellers’ but prefer authors who have a steady output. Of the classics: Evelyn Waugh, E.F.Benson, John Steinbeck etc.,

BRIAN KAVANAGH: A hard question to answer. I think I have to say, The Mystery of a Hansom Cab by Fergus Hume. Hume wrote the book in Melbourne, Australia in 1885 (?) and it took the world by storm. It predated Sherlock Holmes and was the biggest selling mystery novel until Christie publish Mysterious Affair at Styles. Hansom Cab has never been out of print and I believe a television version is being prepared for production in Australia.

BRIAN KAVANAGH: At this stage almost exclusively through on-line promotion with the use of review quotes, book trailers and accessing book groups. Also Facebook and Twitter. I also publish a number of book trailers for each book to keep them fresh for viewer/readers.

BRIAN KAVANAGH: My publisher, BeWrite Books has been at the forefront of ebook publication for many years. Amazon’s Kindle is ideal for my mystery series. It is comprehensive and allows easy access and instant downloads for readers, along with sample material for readers to evaluate if the book is for them. The price is reasonable and the presentation perfect. It also allows me to reach an international reading audience.

BRIAN KAVANAGH: Be absolutely sure of how the process works. And once on Kindle, don’t think that the world is going to beat a path to your door. Promote. Promote. Promote. By whatever means that are available to you. And don’t think that if your book were to be published by a major publisher they would do all the work. Not so. You would still have to work hard to get your book recognised by the reading public. There are thousands books being published and it is vital that your book doesn’t sink under the weight of them. Make it stand out. And don’t throw the Kindle book out at too cheap a price. It may look attractive to the reader but in their mind, a cheap price might mean a cheap work. Check what other authors are asking for similar works. And ensure that you have a great cover design. But it is all up to you. Promoting is an essential part of writing and publishing. 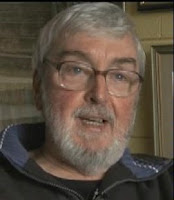 Brian Kavanagh writes, "After a lifetime making films, I have a new life writing books. No one is more surprised than I. Author of Belinda Lawrence mystery series, Capable of Murder, The Embroidered Corpse, Bloody Ham, and A Canterbury Crime. Published by BeWrite Books.

"I'm proud to have a Lifetime Achievement Award from the Australian Film Editors Guild and an Australian Film Institute award for Best Editing for the childrens film, Frog Dreaming, along with many nominations. Proud also of my first feature film, which I produced and directed, A City's Child, which won an AFI award for actress Monica Maughan and was invited to screen at the London Film Festival as well as Edinburgh, Montreal, Chicago and Adelaide, where it won the Gold Southern Cross Advertiser Award for Best Australian

"Film, all in the days when most of you were a mixture of multiplying cells, when the world hadn't heard of Australian films (apart from the dear departed, Chips Rafferty) and therefore was a neater and cleaner place. I am also a member of the Australian Society of Authors."