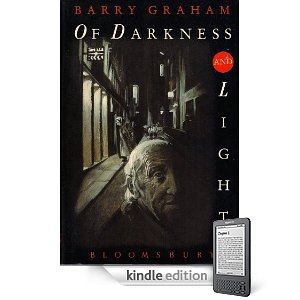 Barry Graham, author of Of Darkness and Light, discusses his book, his journey as a writer, and self-publishing on Kindle.

DAVID WISEHART: What can you tell us about Of Darkness and Light?

BARRY GRAHAM: It's a modern, urban gothic horror story which was written in a two-month frenzy during the summer of 1988, and was published the following year. I turned 22 while writing it, and it is no overstatement to say that the book gave me everything that is good in my life. I have no idea what would have become of me if I hadn’t written it.

I still get emails from people telling me they had to sleep with the light on after reading it, which makes me smile.

BARRY GRAHAM: I don't really try to develop the characters, or control them in any way. It's more like I listen to them and write down what they say and do. I never know what they'll say or do until a few seconds before I type the words.

BARRY GRAHAM: People who want to read about matters of life and death, rather than the psychological hang-ups of privileged white people. The latter seems to the the stuff of most legacy-published fiction.

BARRY GRAHAM: When I started to write, I did so because I didn’t know what else to do with my life. I had no academic qualifications and no job skills, but I read a lot and so I thought maybe I could be a writer. I was living in a bedsit in Glasgow, and every night I hacked away at a manual typewriter I’d bought from a catalogue, not knowing and not caring whether what I was writing was any good, just knowing that I had to do it. As I wrote Of Darkness and Light, the story practically told itself; since then, I have never written anything so quickly. I also haven’t written another book in that genre; I don’t know why it came out the way it did, only that it did.

When it was finished, I sent it to a handful of publishers, got a couple of rejections, and then it was accepted by Bloomsbury, who went on to publish my second and third books too. I found myself in the U.S. when my fourth book, The Book of Man, was chosen by the American Library Association as one of the best books of 1995. Suddenly, I had something resembling a career!

BARRY GRAHAM: I write very intuitively, just letting it come. I've never been blocked or found it difficult. I just write and write until it's good, then edit and edit until it's better, and keep doing that until it's as good as I can make it.

BARRY GRAHAM: The Friends of Eddie Coyle. It's flawless.

BARRY GRAHAM: I've done hundreds of readings and signings, just about anywhere they'll have me. I don't actually read at "readings"—I recite chapters of my books from memory. I also blog nearly every day, which seems to help keep my name out there.

BARRY GRAHAM: I'm a bit of a caveman when it comes to technology, but I think that paper books are becoming more and more of a niche market, and so legacy publishers are more and more inclined to play it safe with what they'll publish. I haven't walked away from legacy publishing—I have two books coming out that way this summer, one in the U.S. and U.K. and the other in France. But I'm excited about the possibilities of Kindle.

BARRY GRAHAM: First of all, don't think about publishing until you're absolutely done making your book as good as it can possibly be. Then do some research and learn how Kindle publishing works. Don't expect it to be easy. It's not really publishing if nobody knows about your book. Publish it, promote it—and be very, very patient. Let it find its audience. Meantime, write more books.

Barry Graham is an author, journalist and blogger whose novels have received international acclaim and whose reporting has helped more than one corrupt politician leave office. He has written for a wide diversity of magazines and newspapers, including Harper's, Flaunt, Parabola, Las Vegas Life, The Arizona Republic and Scotland on Sunday.

Born and dragged up in Glasgow, Scotland, he has traveled widely and is currently based in the U.S. His previous occupations include boxing and grave-digging. He is also a Zen teacher, and serves as the Abbot of The Sitting Frog Zen Center in Phoenix, Arizona.

He has witnessed two executions at the invitation of the prisoners. His account of his experiences reporting on the death penalty, "Why I Watch People Die," won a FOLIO Silver Medal in the Best Single Article category in 2008.

Barry Graham's novels include The Book of Man (chosen by the American Library Association as one of the best books of 1995), How Do You Like Your Blue-Eyed Boy? and Before. His stories have been published in the anthologies Phoenix Noir, Suspect Device and Intoxication, and his poetry has appeared in numerous magazines and anthologies.

In 2009, the French magazine Transfuge named Barry Graham one of the great "post-realist" authors. A collection of his fiction and nonfiction, Regardes Les Hommes Mourir, will be published in French by 13th Note Editions in the summer of 2011. At the same time, his novel The Wrong Thing will be published in America and the U.K. by Switchblade Press. His recent novel How Do You Like Your Blue-Eyed Boy? is published on Kindle, as is his novella Of Darkness and Light, first published by Bloomsbury in 1989.