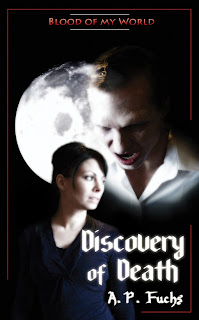 A.P. Fuchs, author of the Blood of my World series, discusses his books, his journey as a writer, and self-publishing on Kindle.

DAVID WISEHART: What can you tell us about Blood of my World?

A.P. FUCHS: The Blood of my World series—currently being Discovery of Death, Memories of Death, and Life of Death—is my attempt at telling a vampire love story while still staying true to the vampire mythos and creep factor. I really wanted to know if indeed a vampire and a human could have a loving relationship, and since I’m one of those writers who write by the seat of his pants, it was as much a journey for me as it was for them. Let’s just say the conclusion drawn shocked even me.

A.P. FUCHS: Like I said above, I write by the seat of my pants so it seems that—looks and ages of the characters aside—they tend to write themselves, as if my subconscious has already pre-packaged them and ensures I keep each one unique through the writing process and only let them say and do things consistent with who they are as established on the page. I really wish I could give you “I do this then I do that” answer, but I don’t have one. I just kind of write and roll with it. 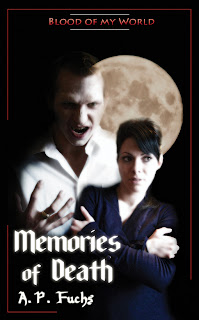 A.P. FUCHS: Another fanboy like me who likes new takes and twists on archetypical themes.

A.P. FUCHS: In short, my goal was to draw comics for a living, so I ended up going to animation school figuring if I could draw stuff in motion, I could certainly draw them standing still. Then the school didn’t deliver on their curriculum and wasted everyone’s time, so I grew embittered toward art in general for a while, and instead channelled my creative energies into writing comic scripts, short stories, some of which ended up forming the beginning of my first novel, A Stranger Dead.

Things kind of took off from there, despite A Stranger Dead having been put out through a vanity outfit. Ironically, as much as a nightmare that procedure was, I fell in love with producing books and so in 2004 launched Coscom Entertainment. Since then I’ve juggled being a writer and a publisher. It’s been an amazing journey, with ups and downs and everything in between. But all the hard work’s paid off and for the past couple years I’ve been able to write and publish fulltime. 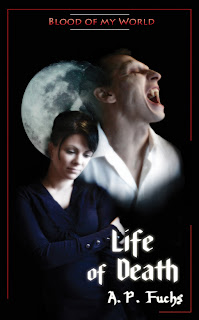 A.P. FUCHS: I get an idea, let it stew for a bit in the back of my mind, then the first line comes to me. Then I just write until it’s done, not editing while I go. After, I take a break from it for a while, then do my second and third drafts back-to-back. I hand it off to my editor. I get it back. I go over his edits, agree with around 95% of them, then do one more draft myself. My wife then comes on as first reader, catches any last-minute mistakes, then we go to press.

A.P. FUCHS: Bag of Bones by Stephen King. It was just so good and so involved, and had this creep factor to it that still amazes me.

A.P. FUCHS: I’ve been publishing on the Kindle since it came out. Why? Because it’s another way to reach readers and my philosophy has always been to use as many avenues as possible to reach the reader regardless of how they want to read their books.

A.P. FUCHS: Please, please don’t think that all this Kindle hype is true. It’s not. Any seasoned author—at least the ones I’ve talked to—will tell you that. A lot of the folks hyping it are those who’ve lucked into success. Literally. Don’t take it as the norm. There are 900,000 ebooks on Kindle at the moment, with a few hundred authors hitting it big. Do the math. It is like hitting the lotto to a degree.

My suggestion is to first establish your goals as a writer: do you want to write fulltime, part time or as a hobby. Based on those, that would determine your publishing route. If the first, seek an agent and hope for a good deal. If the second, the mid or small press is fine. If a hobby, self-publish so if your book flounders, then you haven’t risked all that much and can avoid a lot of heartache.

To just dive in and “upload and go” is plain silly, but sadly many newbie writers do that without knowing that self-publishing is a lot of work and definitely not for those who want to “just write.”

A.P. Fuchs is the author of many novels and short stories, most of which have been published. His most recent books are Possession of the Dead, Magic Man Plus 15 Tales of Terror and Zombie Fight Night: Battles of the Dead, in which zombies fight such classic monsters as werewolves, vampires, Bigfoot, and even go up against awesome foes like pirates, ninjas, and . . . Bruce Lee.

A.P. Fuchs is also known for his superhero series, The Axiom-man Saga, and the author of the shoot ’em up zombie trilogy, Undead World. He also edited the zombie anthologies Dead Science and Vicious Verses and Reanimated Rhymes: Zany Zombie Poetry for the Undead Head.

Fuchs lives and writes in Winnipeg, Manitoba. Visit his corner of the Web at www.canisterx.com. He can also be followed on Twitter at www.twitter.com/ap_fuchs.