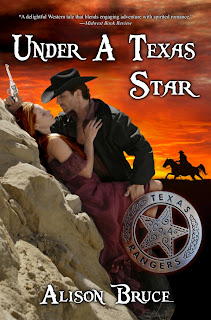 Alison Bruce, author of Under a Texas Star, discusses her book, her journey as a writer, and publishing on Kindle.

DAVID WISEHART: What can you tell us about Under a Texas Star?

ALISON BRUCE: Under A Texas Star is a historical-romance-mystery set in the old west. Marly Landers and Jase Strachan are on the trail of the same fugitive. For Jase, it's a job. He's a Texas Ranger. For Marly, it's personal. She has dressed up as a boy to track down the con man who preyed on her vanity and her friends' greed. Jase goes along with the masquerade, never thinking it would be drawn out when they get caught up in a murder investigation.

ALISON BRUCE: In most cases, the focal characters come to me before I have a story to place them in. Who they are defines what they will do in the situation I present them. Supporting characters emerge as a result of plot. Sometimes I don't differentiate them well at first. After my first run at the story, I go back and pare down weak characters, give their role to a stronger character or eliminate them completely. It's a bit like making a movie. You can have lots of extras on hand, but you have to be spare handing out the speaking roles.

ALISON BRUCE: This sounds narcissistic, but my ideal reader is like me: intelligent, with a sense of humour, enjoying  genre fiction and the kind of romance that makes you go "ahhh", not a"eww!" George Lucas once said that he made the kind of movies he would like to go see. That's how I feel about writing books.

ALISON BRUCE: I started writing fiction for the entertainment of family and friends when I was twelve. When I was twenty-one, I thought I was good enough to get published. A couple of rejections later, I stopped submitting stories, but I never stopped writing. I eventually became a freelance writer, editor and designer—and I continued to write stories for family and friends. It wasn't until I was taking care of my sister that I got serious about getting published again. When Joanne died, I pushed myself out there, submitted my work to publishers, agents, contest... I joined Crime Writers of Canada and the Writers and Editors Network. I put myself out there. Eventually, that and a willingness to keep learning put me in the right place at the right time to find Imajin Books.

ALISON BRUCE: Ideas for stories come to me as scenes or characters visualized, often in a dream or daydream. I jot them down and most go no further. Either there isn't enough to build on or I lose interest. (And if I'm not interested in it how can I make it interesting to other people?) Some ideas will survive. More characters and scenes cling to the original until a critical mass develops. At this point I stop, plot out the story arc and figure out what I need to research.

If the story involves world building, the plotting, planning and research might take a while. For instance, for Under A Texas Star, I needed to research the history and geography of Texas so I could make Fortuna a believable town.

Once I have a first draft, I leave the story alone for a while. I need that space to be able to see the flaws. I also have a couple of excellent beta readers who point out where I've gone astray, said too much, said too little, or mucked up in spelling and grammar.

ALISON BRUCE: I immersed myself in Louis L'Amour, Georgette Heyer and Robert Heinlein when I was growing up. L'Amour and Heyer certainly influenced my writing Under A Texas Star. Heinlein, not so much. Heyer's attention to social history made the Georgian and Regency periods come alive and influenced how I would study history when I was at university. L'Amour's professed attitude toward writing—the desire to tell a good story—spoke to me as soon as I read it. I should also mention William Shakespeare, whose comedies have led me to couple romance with humour.

ALISON BRUCE: Guards Guards by Terry Pratchett. I can read that book every year and still laugh out loud, be emotionally touched, and appreciate the intelligence of the writing—just as if I never read it before.

Fellow Imajin Books author, Melodie Campbell (Rowena Through the Wall), and I have been working together—pooling our information, resources and talents.

As a member of Crime Writers of Canada (http://crimewriterscanada.com/), I have my books in their online catalogue and Under A Texas Star has been featured on the front page and in Cool Canadian Crime—a publication of members' new release sent out quarterly to 3000+ subscribers.

Leading up to the release of Under A Texas Star, I posted a "making of" series on my blog over four weeks. Before that, I ran a cover survey to get feedback on the cover versions being considered. Starting in June, I'm on the virtual road with guest blogs and interviews. My website (www.alisonbruce.ca) and blog (http://alisonebruce.blogspot.com) will have my "stops" posted as they are finalized.

ALISON BRUCE: My publisher, Imajin Books, determined how my book was to be published, but the more I learned, the more I understood the reasoning. As much as I love holding a real book in my hands, ebooks have advantages over print—especially when you are trying out a new author, or travelling or have vision issues. I only wish Kindle had been around for my father. 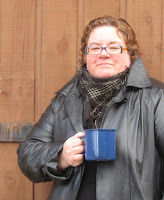 Alison Bruce has an honours degree in history and philosophy, which has nothing to do with any regular job she’s held since. A liberal arts education did prepare her to be a writer, however. She penned her first novel during lectures while pretending to take notes.

Alison writes mysteries, romance, westerns and fantasy. Her protagonists are marked by their strength of character, the ability to adapt (sooner or later) to new situations and to learn from adversity.

Copywriter and editor since 1992, Alison has also been a comic book store manager, small press publisher and web designer in the past. She currently manages publications for Crime Writers Canada and is a volunteer with Action Read Family Literacy Centre. A single mother, she lives in Guelph, Ontario with her two children, Kate and Sam.