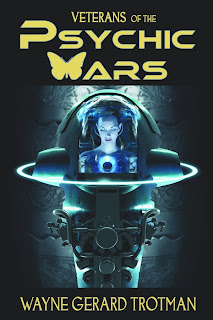 Wayne Gerard Trotman, author of Veterans of the Psychic Wars, discusses his books, his journey as a writer, and self-publishing on Kindle.

DAVID WISEHART: What can you tell us about Veterans of the Psychic Wars?

WAYNE GERARD TROTMAN: Veterans of the Psychic Wars is a science fiction epic, and the first book of the ‘Psychic Wars’ series. It took me almost four years to write, largely because of the research involved. It is very unique, as it features minority protagonists in a space opera setting. It is available globally in Kindle, ebook and paperback editions, and has gained critical acclaim.

Here is my synopsis:

In a distant galaxy known as the Cosmic Sea, Baron Seti Aljyk has caused the Second Psychic War by seizing Najura, the last of the ancient swords of power, and usurping the imperial throne from Sakara Rey, the True Emperor. On Earth, young schoolteacher Roman Doyle remains unaware he is Prince Armon Sakara, heir apparent of the True Emperor. That is, until he encounters Chi-Ro Jin, a Veteran of the Psychic Wars. Chi-Ro’s mission is to return Roman to the True Emperor, but Roman believes that Chi-Ro is crazy.

When Roman’s wife, Soraya, is abducted by the Baron’s assassins, Roman is forced to make the epic journey to the Cosmic Sea. However he does not go alone. He is joined by his shamira Chi-Ro, Nuri Nemsys a beautiful secret agent, Anah Sadaka the mysterious captain of the Starglider Sanura and Roman’s friend, Zachary Silverman, a quantum physicist.

With his dormant psychic and astral abilities awakened by an alien drug and pursued by the Baron’s assassins, Roman, his friend, and the Veterans of the Psychic Wars face evil and danger in uncharted space and on alien worlds. Roman must overcome his fears, master the martial art of Hatari Ikou, and learn the secrets of astral projection, in order to rescue his wife, retrieve the sword of power, and bring the Psychic Wars to an end.

WAYNE GERARD TROTMAN: It seems obvious, but I think it is very important to have a clear picture of characters in your head and on paper. I sometimes use photographs of actors for this purpose. Character development involves gradual exposition of traits, quirks and motivations. I look at the various situations in the piece, from the point of view of individual characters. Creating a back-story and biography is essential. An often-overlooked way of differentiating characters involves the use of different vocabularies. Allocate a distinct vocabulary for each character. There are some very famous writers whose characters all speak the same way. This is something I consciously try to avoid with my own work. The age, intelligence, experience, cultural background and personality of characters are paramount in establishing them as distinct individuals. I interact with characters from my stories in my dreams, but perhaps not everyone can, or would like to do that.

WAYNE GERARD TROTMAN: Any intelligent, open-minded individual, looking for an action-packed story with a degree of humour and philosophical depth.

WAYNE GERARD TROTMAN: I started creating stories when I was very young. My desire to create my own stories stemmed from a deep love of books, comics, television and films. The first character I ever created as a toddler, called Tuduh Fadah, has developed into an alien character in Veterans of the Psychic Wars. I have written short stories, poetry, articles, songs, film scripts and now an epic novel.

WAYNE GERARD TROTMAN: I spend many hours formulating things in my head, making notes and gathering information, before I get to writing. I write only when I’m in the mood; and fortunately, once I get going, I don’t stop until I’ve done a fair amount of work. On my best day, I completed 4,000 words, which required little or no editing.

WAYNE GERARD TROTMAN: The Lord of the Rings.

WAYNE GERARD TROTMAN: Amazon currently offers up to 70% commission. If you format the book and design the cover yourself, it costs nothing to have it listed on the world’s most powerful retailer.

WAYNE GERARD TROTMAN: Please ensure your book is properly formatted and edited. If you are unable to do it yourself, it is worthwhile to employ someone to do it. Book covers are very important, and worth spending money on. Beware individuals offering expensive publicity packages. Read books on the topic of self-publishing, such as Aiming at Amazon by Aaron Shepard. Be prepared to spend at least half of your time promoting your book. When creating an author website, try to ensure that your books are not overwhelmed by distracting widgets and multi-coloured, inappropriate typefaces. Life is filled with challenges, so a sense of humour is essential. Follow your dreams. Do not ever give up!

Wayne Gerard Trotman is a British writer, filmmaker, artist, photographer, composer and producer of electronic music. Born in the Republic of Trinidad and Tobago, Trotman immigrated to England in 1984, where he lives with his wife and two young sons. A martial arts enthusiast, he wrote and directed Ashes to Ashes, Britain’s first martial arts feature-film. He has a cosmopolitan and multi-cultural approach to all his artistic work, which has received recognition internationally. His epic science-fiction novel, Veterans of the Psychic Wars, is the first of a proposed ‘Psychic Wars’ series.

Veterans of the Psychic Wars is available now at: Amazon US, Amazon UK and Smashwords.