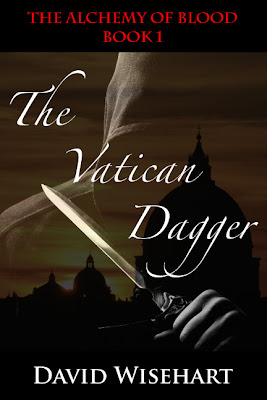 I've designed a new ebook cover for the Kindle edition of my forthcoming novel, The Vatican Dagger.

I've outlined a trilogy of books with the series title "The Alchemy of Blood" and have written about half of Book 1.

I'll be posting sample chapters in the days and weeks ahead, in anticipation of the book's Kindle release in late spring or early summer 2011.

Here's a little teaser about the story:

The Vatican Dagger is a vampire novel set in the Italian Renaissance.

The pope's brilliant son, Cesare Borgia, enlists the aid of Leonardo da Vinci and Niccolò Machiavelli to defeat the growing forces of darkness.
Posted by kucinx at 10:26 PM