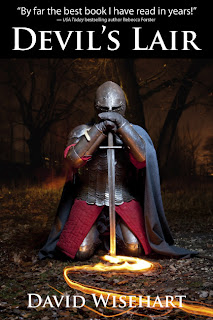 I've made a new Kindle ebook cover for my first novel, Devil's Lair. The previous cover was a painting of the Gates of Hell, but I wanted to try a cover that had a character on it, and one that read more clearly as a medieval fantasy. I think a knight in armor is sufficiently iconic for the idea of medieval adventure, and the flames coming from the sword indicate an element of magic indicative of the genre. The knight kneels in a dark wood, and could be praying, steeling himself for battle. I like that. And the sword itself is in the position of a cross. For an ebook cover it's important to have a clear central image, something to draw the eye. I think this cover does a better job of that than my previous one. I licensed the image from istockphoto for about ten bucks.

I also added a quote from Rebecca Forster's Amazon review of my book: "By far the best book I have read in years!" Although the quote itself is probably too small to be read clearly on the thumbnail image, I find that added text on an indie ebook cover can make it look more like a traditionally published book.