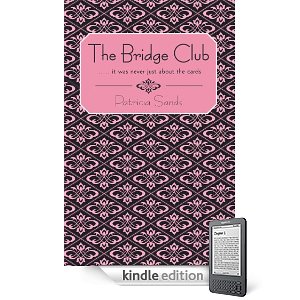 Reviewed by Kathy Scott, Founder of the website Me and My 1000 Girlfriends, That's Who!

Where can you find a story about friendship, laughter and the good things in life that also touches on alcoholism, infidelity, porn addiction, terminal illness and grief?  For most women, it’s often within their own circle of friends.  Author Patricia Sands reminds us of the complexities of women’s friendships in her new book, The Bridge Club, a moving tale of eight women whose lives intersect once a month initially to play the game of bridge.  What began as one night turns into four decades that span the segments of a woman’s journey from youthful optimism to embracing the challenges and opportunities presented in life’s later years.

Based loosely on her own bridge club, Sands weaves the reader through a maze of life’s inevitable scenarios as the club bears the death of a member’s spouse, one woman’s meeting with her biological mother, the inevitable marital and health issues, and another’s final chance at freedom from the painful addiction to alcohol through rehab.

“There are many subjects I address in the book that are controversial.  Some people may wonder if they were chosen to thicken the plot,” says Sands.  “Although I have taken liberties with the actual events, and it is truly a work of fiction, most issues faced by the characters in the book were experienced in my own bridge club. The bottom line of the story is a testament to friendship and hope.”

The final chapter of The Bridge Club challenges our principles as one woman begins to descend into dementia.

The Bridge Club is a 1000 GIRLFRIENDS’ BOOK OF CHOICE.  We highly recommend this remarkable story of friendship.  It’s the PERFECT book club choice.

Patricia Sands’ new novel attests to the power of friendship. Not simply the “Hi, how are you?” type but the kind that weathers all storms, unselfishly celebrates triumphs, and hums along year after year with never an unkind word. It does exist.

If you already have friendship like this in your life then you will relate to the women of The Bridge Club.  If you don’t, perhaps the story will inspire you to find it.

Book Excerpt from The Bridge Club:

All is calm, all is bright.

It wasn’t Christmas and it’s not about religion, but whenever I think of that night, those words filter into my head. Kind of bizarre, I know, but that’s how thoughts are sometimes.

The winter storm that consumed the weekend had finally moved on. As often happens, the unpredicted disturbance came at us out of nowhere, much like the shocking news months earlier that bound us together for these two days.

Winds had raged sporadically. Snowfall had fluctuated from light to blinding, including everything in between, but there was never nothing.

Left in the storm’s wake were drift-filled roads, the work of savage gusts whipping the snow across the flat, vacant fields of Simcoe and Grey counties. The white barrage had swirled and funneled as it was sculpted into uneven peaks, trapped between the fencing that bordered the road. Trapped, as between the proverbial rock and a hard place, which was how you might have described this group of friends, but you would have been mistaken. We had chosen to be there.

Dangerous whiteout conditions brought traffic to a halt as roads had been closed around midnight on Friday. Through sheer luck we had left early enough to miss the worst of it. Trust me, you don’t want to be out there when you can’t tell which way is up.

On Sunday evening it was suddenly peaceful. Quiet. Still. A silent calm filled the post-storm air and cast a surreal shroud over the landscape. The pristine snow reflected the moon’s soft glow, making the night appear more like dawn. Had we not been so distracted, we would have appreciated the beauty of it all.

Too numbed by what we had experienced on this weekend to even notice the cold, we stood on the crest of the hill by the farmhouse and watched.

In the distance, a fluorescent blue beam revolved on the cab of a snowplow. Piercing the dark, the probing rays brushed across the mounds being carved along the narrow side road. Blinking red and yellow lights lined the truck warning of its massive size. Following in tandem was a bulky SUV with amber hazard signals flashing. Last, and somewhat diminished by comparison, were the headlights on the unmistakable silhouette of a funeral-home hearse.

The pulsating throb of the combined lights created a slow-motion kaleidoscope silently sliding toward us.

That’s how this story ends. Let me tell you how it all began.

Patricia Sands lives in Toronto, Canada and has degrees from the University of Waterloo and York University. With a happily blended family of seven adult children and, at last count, six grandchildren, life is full and time is short. Beginning with her first Kodak Brownie camera at the age of six, she has told stories all of her life through photography. Her debut novel The Bridge Club was published through iUniverse in September 2010. Currently immersed in the demands of social media marketing, her second novel is a work in progress.