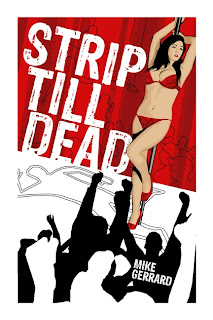 “The lifestyle of strip clubs and strippers is both thought-provoking and captivating and from the opening chapter I felt myself lured into areas of London and people that have, until now, been ignored by most writers. Mike Gerrard has done his research well … This is a brilliant read: fast-moving, exciting and it will appeal to male and female readers alike.”
—Mari Nicholson, award-winning writer

"This book gives one a look into the world of the stripper in London. The seedy places with even seedier people gave you a feeling of being right on stage with them. Strippers were brought into a new light for me, showing that they are more than the common misconceptions… worth reading."
—J. Browning

"The mystery aspect of Strip Till Dead lures the reader into the story, offering clues like breadcrumbs along a woodland path. Gerrard plots his story well and carries it off with flair. The characters each show great consistency of personality throughout, even as they reveal the depth of that personality."
—Mary Beth Magee

Liz is Nicola. Nicola is a stripper. And a stripper is about to die.

When Liz Pendle moves from the north of England to go to university in London, her life is about to change in more ways than she can imagine.

Persuaded by her flatmate Zuzzi that stripping is an easy way to make money to pay off her student loan, Liz is soon taking her clothes off in some of London’s seediest pubs and clubs.

But when a stripper is found murdered, Liz is lured even further into this secret world. She must decide just how far she’s prepared to go to help unmask the killer.

The author
Mike Gerrard is an award-winning travel writer who has written for National Geographic, American Express, The Times of London, The Washington Post, and many more. Strip till Dead is his first crime novel.

Book Excerpt from Strip Till Dead:

'Right, take your clothes off,' he told her.

Liz's hand went to her neck as if to choke or stroke herself. She looked at Stone's face and could see that he wasn't joking. She'd seen the same look in a man's face before. Stone's eyes were as grey and as cold as his name, and his skin had an oily sheen to it that glistened in the London sunlight.

‘You got a problem with that?' he asked, as Liz hesitated.

'No, no,' she said, fumbling to open the top button.

'I just want to see your body.'

The phrase cut through her.

'It's just that if you’re not comfortable doing it here...'

He shrugged. She needed the job.

'Some of my clients are very particular. I send them someone with no tits and stretch marks, bang goes my business, darling, you know what I mean?'

Liz breathed in and began to tug her blouse out of her jeans. Zuzzi didn't warn her about this, but maybe she took it for granted. Maybe Liz should have realised: if you go to see an agent to get work as a stripper, you might have to take your clothes off at some point. Or was he just taking advantage? It was one thing having a giggle over a glass of wine in the bar, and reckoning you had the nerve. It was something else standing there in front of some stranger's desk and undressing while he watched. But she needed the money.