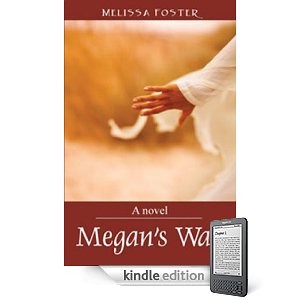 "Megan's Way by Melissa Foster is an emotionally moving book...I cried at nearly every turn of the page. Melissa does a great job in bringing you into the life of her characters and keeps the story rolling smoothly...What made this book really catch my attention were all the secrets each character holds..." —Jeanette Stingley, Women's Literary Editor, Bella Online

"Megan's Way, by Melissa Foster (Outskirts Press). A wonderful, warm, and thought-provoking story with a touch of the paranormal...On the surface, it's a tale about a mother (Megan) whose cancer has tragically returned with a vengeance, and the interactions of her teenage daughter (Olivia), best friend (Holly), and several male friends (Jack, Holly's husband, and Peter, whom they've known since childhood). Many areas are touched upon: the emotional pull between mother and daughter, how one deals with death and separation, our mortality, what we give up for those we love, and the secrets and lies that are part and parcel of so many of our relationships...This is a deep and moving book that speaks to men as well as women, and I urge you all to put it on your reading list."
—Thomas Elliott, Book Review Editor, Mensa Bulletin

"Cancer is a harsh companion that has an annoying tendency to return to lives. Megan's Way is a novel exploring the cancerous fate of Megan Taylor as the single mother deals with the reemergence of her disease. The tale follows Megan and her daughter Olivia as they deal with the way their lives are torn apart. Megan's Way is a fine and fascinating read that many will find hope in."
—Midwest Book Review

What would you give up for the people you love?

When Megan Taylor, a single mother and artist living on Cape Cod, receives the shocking news that her cancer has returned, she's faced with the most difficult decision she's ever had to make. The love she has for her daughter, Olivia, and her closest friends will be stretched and frayed.

Megan's illness reawakens the torment of her best friend, Holly Townsend, whose long-held secrets and years of betrayal come back to haunt her. How does one choose between a daughter and a life-long best friend? Can the secret she has been keeping be revealed after years of lying without destroying everyone in its wake?

Meanwhile, fourteen-year-old Olivia's world is falling apart right before her eyes, and there's nothing she can do about it. She finds herself acting in ways she cannot even begin to understand. When her internal struggles turn to dangerous behavior, even the paranormal connection she shares with her mother might not be enough to save her - her life will hang in the balance.

Megan's Way is a journey of self discovery and heartfelt emotions, exploring the depth of the mother-daughter bond, and the intricacies of friendship.