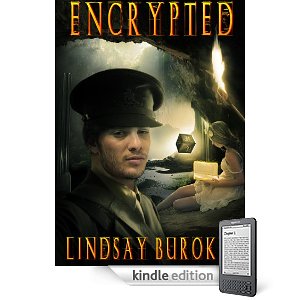 "Encrypted (A+) is a fun romp, an adventure in the Lois Bujold Barrayar spirit...which I highly recommend if you like your sff fast, page turning with action, mysteries and a dash of romance."
—The Fantasy Book Critic

Professor Tikaya Komitopis isn’t a great beauty, a fearless warrior, or even someone who can walk and chew chicle at the same time, but her cryptography skills earn her wartime notoriety. When enemy marines show up at her family’s plantation, she expects the worst. But they’re not there to kill her. They need her to decode mysterious runes, and they ask for help in the manner typical of a conquering empire: they kidnap her, threaten her family, and throw her in the brig of their fastest steamship.

Her only ally is a fellow prisoner who charms her with a passion for academics as great as her own. Together, they must decipher mind-altering alchemical artifacts, deadly poison rockets, and malevolent technological constructs, all while dodging assassination attempts from a rival power determined the expedition should fail. As if Tikaya didn’t have troubles enough, her new ally turns out to be exiled fleet admiral, Federias Starcrest, the man who recommended taking over her nation. To trust him could be a mistake; to fall in love with him would be a betrayal to her people, her family, and the fiancé she lost in the war. Those runes cloak more than mysteries, however, and he may be the only one who can help her unravel them before their secrets destroy the world.

A man towered a few paces away, a dagger and cutlass at his belt, and a muzzle-loading rifle crooked in his arms. His bronze skin and dark hair would have marked him a foreigner even if the black military uniform with its fine factory weave did not. It was a uniform she had not seen in a year, not since the war ended, but she had not forgotten its significance: Turgonian marine.

Swallowing, she shifted her gaze left and right, hoping to spot a couple of the seasonal laborers her father hired to harvest the cane. But the day grew late, and she had worked herself into a private corner of the field. The house stood hundreds of meters away. No one would hear her yell.

The marine said nothing, though his dark eyes followed her darting gaze. Running would confirm she had a reason to hide; maybe she could trick him into thinking she was no one of consequence. Not that being an innocent would necessarily make her safe from a Turgonian.

“If you’re looking for rum,” she said, his language sliding off her tongue automatically, “my brother’s working in the distillery. He can sell you enough for your entire ship at a fair price.”

The marine’s eyes widened, and a satisfied—no, triumphant—smile stretched across his face.

Dread curled through her belly. They knew who she was, what her role had been in the war. Addressing him in his language had been a mistake, a confirmation that they had found the right person. She eyed the rifle, noticed it was loaded and cocked. A huge mistake.