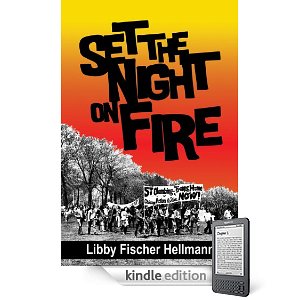 "A tremendous book - sweeping but intimate, elegiac but urgent, subtle but intense.  This story really does set the night on fire."
—Lee Child

"A brilliantly-paced thriller, transitioning seamlessly from modern-day Chicago to the late '60s. First-rate characterization...Best to start early in the day, as it is easy to stay up all night reading it."
—Foreword Magazine

"Set the Night on Fire is a compelling story of love, truth and redemption. This will be a break-out novel for this talented writer. Highly recommended."
—Sheldon Siegel, NY Times bestselling author of Perfect Alibi

"A top-rate thriller that taps into the antiwar protests of the 1960s... A jazzy fusion of past and present, Hellman's insightful, politically charged whodunit explores a fascinating period in American history."
—Publishers Weekly

(There are an additional 20 reviews on Amazon)

Someone is trying to kill Lila Hilliard. During the Christmas holidays she returns from running errands to find her family home in flames, her father and brother trapped inside. Later, she is attacked by a mysterious man on a motorcycle. . . and the threats don't end there. As Lila desperately tries to piece together who is after her and why, she uncovers information about her father's past in Chicago during the volatile days of the late 1960s . . . information he never shared with her, but now threatens to destroy her. Part thriller, part historical novel, and part love story, Set the Night on Fire paints an unforgettable portrait of Chicago during a turbulent time: the riots at the Democratic Convention . . . the struggle for power between the Black Panthers and SDS . . . and a group of young idealists who tried to change the world.

Book Excerpt from Set the Night on Fire:

"Casey, you're a Celtic knot." Alix giggled as she passed Rain the joint. The smoke Casey had been holding in exploded out of his lungs. He coughed long and hard, drowning out the chorus of "People are Strange" by the Doors.

"Are you all right?" Rain squinted through her granny glasses.

Casey nodded, his throat so raspy he couldn't speak.

Rain crossed her legs Indian-style and took a hit off the J. She held it in, exhaled quietly, then passed it to Dar.

"What do you mean, Alix?" Casey finally croaked.

Alix tucked a lock of blond hair behind her ear. The six of them were on the living room floor of the apartment, a shabby space with yellowed shades, torn linoleum, and cracks in the walls. "You're always making connections," she said. "With people, places, events. You twist things all together. Like a Celtic knot."

"Aw, man, you're just stoned." Payton wiggled his fingers and sang along with the music.

"It's all right." Alix gently stayed his hand and took the J from his fingers. She passed it to Payton. "Actually, a Celtic knot is a symbol for the complexity of the universe. No matter how our lives play out, we're all intertwined. Twisting and weaving and overlapping. No beginning. No end. Here, I'll draw it."

"Alpha and omega," Teddy said. He lay spread-eagled on the floor.

"Right." Alix got up slowly.

"You all right?" Dar and Casey said it together.

She giggled again and grabbed the back of the couch. "Trippy. I guess I'm a little high."

Dar's eyes, always dark and brooding, were edged with concern. He looked liked he wanted to rescue her, Casey thought. He usually did.

"Just sit," Casey said before Dar had the chance. "Don't draw anything."

But Alix shook her head and went to a large leather satchel in the corner. She fished out a pad and ink pen and started sketching. A minute later she brought it back and handed it to Payton. "See? It folds back on itself. Nothing lost. Very economical."

Payton stared without comment, took another hit, and passed the J to Teddy.

Casey peered at the sketch over Payton's shoulder. He saw a circle with lots of overlapping lines and squiggles. "Far out," he said appreciatively.

"That's you. Symbolically speaking." Alix plopped back down beside Dar.

"Hey. This is good shit." Teddy exhaled and passed the joint back to Casey. "Where'd you get it, Payton?"

Payton scratched his forehead underneath his rolled up red bandana. "Uh... some guy."

Payton shot her a dark look.

"Well, he did. We were in Old Town, looking for copies of The Seed—you know, the special one with the psychedelic 'Yippie' on the cover—and we met this guy. Casey started rapping with him, and a few minutes later, we walked out with an oz."

Alix splayed her hands. "Connections. See what I mean?"

Dar took Alix's outstretched hand. She snuggled closer to him.

Casey tried not to notice. "Where's the hemostat?"

Teddy sat up, found it, and handed it to Casey. Casey clipped it to the roach, took one last hit and passed it back to Teddy, who took another toke, then dumped the hemostat and roach into a large ashtray.

"Star Trek." Casey blew out the last of the smoke.

"Fuck it." Payton shook his head. "And you call yourselves activists?"

"We boldly went where no man has gone before," Teddy said in a stagey, TV voice.

"And met some very spacy creatures," Casey added with a laugh.

"Wrong. 'There can be no peace until every soldier is out of Vietnam and the imperialistic system is destroyed.'" Payton scowled. "Quick. Who said that?"

Casey rolled his eyes. "Give it a rest, Payton."

"Give the man a medal," Payton said.

Alix and Dar exchanged looks. "Alix has a point," Dar said. "We brought thousands of people to Chicago. Discredited the government... and the party that got us into this mess."

"So we brought the war home for a few days." Payton shrugged. "The war didn't take a few days off. And the pigs are still in control."

"You can't run the world according to Mao's little red book, Payton," Rain sniffed. When Payton arched his eyebrows, she added, "I saw you leafing through it the other day. That's dangerous."

"Shit, Rain." Payton ran a hand through his long blond hair. "We invade a country, dump bombs on the people, and risk the lives of millions. All in the name of 'Peace with honor.' Now that's dangerous."

"Hey man, Payton's right," Teddy said, coming to his defense. "Look what happened last week. Troops in the street. Fucking bayonets and tear gas. Mass arrests. This isn't America. It's Nazi Germany." He pulled out a cigarette from a crumpled pack, struck a match to it, and took a long drag.

Alix frowned. "I thought we all agreed it was time for a break. And you shouldn't put that poison into your lungs."

He went to the window, only half-listening to the bickering. Below was the intersection of Sedgwick and Willow, a few blocks north and west of the heart of Old Town. The neighborhood was in transition from an artists' community to a home for hippies, and some of the buildings were abandoned factories that had been divided up into apartments. Theirs wasn't much more than a few rooms with bare bulbs and the occasional cockroach, but the rent was reasonable, and at night you could imagine you were on the Left Bank of Paris or Greenwich Village.

Casey had never thought of himself as a connector. Then again, over the past week they'd formed their own personal collective, Payton called it—and it had been Casey's doing. His and Alix's.

Libby Fischer Hellmann is the award-winning author of four Ellie Foreman mysteries and two Georgia Davis mystery-thrillers, as well as the two volume short story collection, Nice Girl Does Noir. She also edited the highly praised crime fiction anthology, Chicago Blues. She has lived in the Chicago area for over thirty years. Set the Night on Fire is her first stand-alone novel. More at libbyhellmann.com