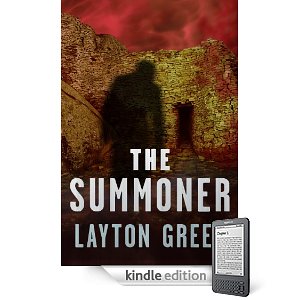 “Layton Green has written a tale with supernatural and political undertones that unravels with ever increasing suspense . . .  The book is plain terrific.”
—Richard Marek, former President and Publisher of E.P. Dutton

“ . . .[T]his book is above and beyond in its narrative, its cohesiveness, the depth of its characters and the quality of the writing. This is one of the best books I've ever read for Odyssey Reviews.”—Odyssey Reviews (Winner -- Odyssey Review’s Award of Indie Excellence)

“Favorite book of the year so far.”
—A Novel Source

“I moved a little outside my comfort zone with The Summoner, and I am glad I did. A blend of action, history, anthropology, thrills, and chills, all delivered with a mature, polished voice.  I am eager for more from this author.”
—Scott Nicholson, Bestselling Author

“Green writes like a dream. Dominic Grey is a fascinating protagonist, and his quest for justice in the heart of a troubled African city gripped me from start to finish. The Summoner also beautifully captures Zimbabwe's diverse and conflicting landscapes — both urban and rural, ancient and modern. The result is a fast-paced and searing narrative that offers a glimpse into a world of religion, politics, and culture few could imagine. The next installment of Green's suspenseful storytelling and Grey’s next journey can’t come soon enough!”
—Melody Moezzi, Award-winning Author, War on Error

“[C]alls to mind such series as Jason Bourne and Indiana Jones, with supernatural/religious overtones thrown in. I recommend The Summoner to anyone looking for a suspense-filled journey into a unique—and at times, terrifying—culture that’ll keep you guessing.”
—Bookhound’s Den

A United States diplomat disappears in front of hundreds of onlookers while attending a religious ceremony in the bushveld of Zimbabwe.

Dominic Grey, Diplomatic Security special agent, product of a violent childhood and a worn passport, is assigned to investigate.  Aiding the investigation is Professor Viktor Radek, religious phenomenologist and expert on cults, and Nya Mashumba, the local government liaison.

What Grey uncovers is a terrifying cult older than Western civilization, the harsh underbelly of a country in despair, a priest seemingly able to perform impossibilities, and the identity of the newest target.

The first work in a globe-hopping series whose protagonists investigate the world’s most bizarre and dangerous cults, The Summoner is a stylish, haunting novel of mystery and suspense that will linger long after the last page is turned.

Book Excerpt from The Summoner:

1
December 9, 2009
The only thing Dominic Grey knew for certain about the disappearance of William Addison was that it was the strangest case to which he had ever been assigned.

The facts were few.  Three nights ago, Addison, retired head of Consular Affairs at the United States Embassy in Zimbabwe, attended a religious ceremony on the outskirts of Harare.  What religion the ceremony belonged to remained unclear.  Harris Powell, Deputy Director of Diplomatic Security and the man now walking beside Grey, had described it as “one of those African ones.”

According to Addison’s girlfriend, a Zimbabwean nurse thirty years his junior, Addison was drawn into the center of a ring of worshippers.  The girlfriend didn’t know what happened inside the circle.  She tried to follow, but couldn’t press through the crowd. What she did know is that he never came out.

As Grey and Harris neared their destination the summer twilight enveloped them, a soft melting of the mammoth sun into the city’s urban hues, a brief and dreamy purgatory before the certainty of the African night.  A broad avenue stretched before them, bordered on the left by the lush beauty of Harare Gardens.  Better light would have revealed a collection of modest-sized buildings too young to be considered quaint or historic, but old enough to have lost their gleam.  Downtown Harare was clean, handsome and quiet – just the opposite of what one might expect from one of Africa’s modern-day tragedies.

The first sign of something amiss was the lack of commerce on the streets.  A few people hurried by, most of them smartly dressed and lucky to be returning home from a job in one of the surviving businesses.  But in a city this poor, Grey knew, beggars and street urchins should clog the center, fruit and produce stands should feed the masses, rickety bazaars should hawk everything from cheap souvenirs to black market commodities.  The absence of these gritty realities glared more than their presence would have.

Grey’s eyes scoured the streets with habitual caution.  The Central Business District was a short walk from the Embassy, but downtown Harare at night was not a place to lose focus.  Harris was doing what he always did: casting lecherous stares at every girl old enough to use teen as a suffix.  His pin-shaped head swiveled on top of his skinny frame, afraid he might miss one.  Coarse black chest hair clumped out of his dress shirt, and he ran a hand over his thinning, cropped hair as if it belonged on the cover of a romance novel.

“What’s the protocol on this one?” Grey said.

“The protocol,” Harris whined in his high-pitched voice, “is don’t let anyone get kidnapped.  We don’t have jurisdiction, and we’re not detectives.”

“The Ambassador tried to get some flown in, but the Zim officials wouldn’t hear of it.  We’re stuck with it.  Improvise.”

Grey shrugged, glad for the change of pace.  Most of his days were spent investigating routine visa and passport fraud, and escorting high-ranking government figures to their favorite restaurants.  The travel kept it interesting, but outside of a coup or assassination attempt, diplomatic security was not an action-packed profession.

“Maybe this’ll jump-start your career,” Harris said.  “If you stumble onto Addison you might get yourself assigned to a decent posting.”

“I happen to like it here.  You seem to have landed in the same country as me, last time I checked.”

“You’ll never learn, will you?  You have to play the game.  I’m here because my next stop is chief of security in the Bahamas.  You’re here because no one wants to deal with you.”

“I’m here because I helped a woman who was carjacked.”

“It happened fifty feet away, Harris.  She got stabbed.”

“That wasn’t your job.  Protecting United States citizens is your job.  She was a local.  She could’ve been a decoy.”

“You’re damn lucky.  The only reason you still have a job is because of your . . . skills.  But if you keep getting downgraded you’ll end up in the Congo, protecting spoiled diplomat kids from mountain gorillas.”

Grey had zero interest in climbing the bureaucratic ladder, but Harris was right, his career was on its last shaky rung.  Nor had it started well.  His stint in the military had almost ended in a court-martial for disobeying his Marine Recon commander’s order.  The order at issue had been to fire into a crowd of villagers.

Even after that incident the CIA had recruited him.  They loved his profile: he’d lived almost his whole life abroad, spoke three languages, had no relevant family ties, scored high on the I.Q. tests, and was already trained in self-defense.  Not trained, according to his former commander, but extraordinary.  Gifted.

Given those qualifications, the CIA could overlook his poor test results in social adaptability and obedience to chain of command.  It wasn’t until Grey underwent ethical profiling that they realized Grey’s moral compass guided him far more than partisan dictates.  He was told to try again after he’d discarded his hero complex.

He’d contemplated the Foreign Service, but after one meeting knew that forced smiles and handshakes were not for him.  During the application process he stumbled upon an opening in Diplomatic Security.  It sounded intriguing, and Grey liked the promise of exotic postings.

Four years in and he was restless.  He wanted to affect people’s lives in a more direct manner.  He fantasized about being a detective in some random city, helping real people with real problems.  But he knew he wouldn’t last there either, wherever there might turn out to be.  Something would cause him to move on.  Like all those who have lived their lives on the outskirts of conventional society, his desire for acceptance was as powerful as his inability to find it.

“So it’s us and the liaison?” Grey asked.

“And some quack the Ambassador called in, a professor-type from Interpol.  He wouldn’t be here if Addison wasn’t friends with the Ambassador.”  Harris glanced at a group of adolescent girls and sprouted a thin smile.  “Waste of a perfectly good evening downtown.”

“He’s an expert on religious something-or-other.  I haven’t seen his CV yet.”
Please support our sponsor:

Become a Kindle Author sponsor.
Posted by kucinx at 10:30 PM