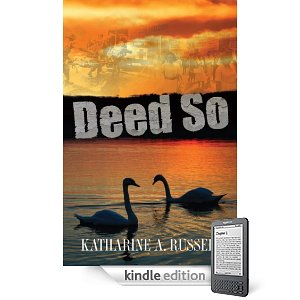 "I think it has the makings of a blockbuster!"
—My Bookshelf

"A confident exploration of the truth and growing up."
—J. Prather, Amazon Vine Reviewer

Welcome to 1962, one year before the world would witness President John F. Kennedy assassinated, and a time before civil rights, women’s rights, and the Vietnam War changed everything. Deed So by Katharine Russell chronicles the coming-of-age of brainy twelve-year-old Haddie Bashford, a sensitive young girl who wants nothing more than to leave the close-minded world of her home in Wicomico Corners. When Haddie witnesses the killing of a black teen by a down-on-his-luck white farmer, her family becomes embroiled in a web of hatred that threatens to engulf the whole town. Tempers flare and prejudice heats to a boiling point, even as Haddie struggles to fully comprehend what is going on, especially the dark consequences within her own family. When the murder case goes to trial, neighbor is pitted against neighbor, and the violence escalates to a dangerous level. As the case drags on, arson erupts, paralyzing the community. Can the town—and Haddie—survive?

Intertwining the major themes of struggle, equality, loyalty, and love that defined a generation, Deed So is a provocative snapshot of a tense time in history. Filled with larger-than-life characters, pitch perfect dialogue, and a wonderful sense of history, Deed So is as moving as it is thrilling. Haunting, edgy, and thought-provoking, this is a perfect read for fans of To Kill a Mockingbird or Nicholas Sparks.


Book Trailer for Deed So:


Book Excerpt from Deed So:
Chapter 1
I was a waitress for Christ. Recruited into the legions of church supper servers, who answered the call across the South every fall, I reported to our parish hall and delivered platter upon steaming platter of artery-choking victuals to appreciative suspender-slapping locals and city folk who came down in sleek motor coaches. I started when I was six. Child labor laws could not stand up to the will of Dixie's God.

We were Episcopalians and our specialties, offered for generations at our fall festival, were old ham, fried oysters and beaten biscuits. The Methodists did fried chicken and double-crust peach pie. The Catholics were famous for fried perch, new potato salad and deviled eggs. I do not know what the Baptists served because I was a white girl not allowed to go to their church suppers.

In Wicomico Corners, everybody knew everybody. Heck, you only needed to go up three rungs on your family tree to claim relation to half the county. People attended the same church their great-grandfathers had and dealt at the same general store. The county boasted two stoplights, one near the courthouse across from the war memorial and one at the main gate of the navy base. Doors were left unlocked. Chickens, dogs, children and the occasional escaped milk cow ran free.

This is the story of the year I graduated from Calvert Elementary, entered Chesapeake High, and nearly died. Chesapeake was a grade seven through twelve institution. In those days, Boards of Education approached schooling as one big swimming lesson: when you completed grade school, they threw you directly into high school, the social and sexual deep end, and you sank or swam under the predatory eye of upper classmen.

My name is Agnes Hayden Bashford, but since my great aunt Agnes was very much alive and using her moniker back then, everybody called me Haddie. I was twelve and a half and the brightest girl in my class. It was 1962 and the high school opened a new wing to accommodate the spit-polished offspring of the WWII victors. We were not yet called boomers, nor were we aware of our economic power or any other peculiar qualities apart from our ability to duck and cover. My father, a naval aviator during the war, instructed me in leadership, ham radio operation and ramrod posture, although my erect stature was impaired at the time by an ill-fitting training bra handed down from a cousin.

That summer I took catechism in the kitchen of the parish hall. Our class consisted of four of my cousins, the daughter of the head of the Altar Guild (to whom I was distantly related) and one black kid, Tiny Barber. Parishioners called Tiny the diocesan guinea pig, because he was the first in our parish to participate in an integrated catechism class. Chances are, I was related to Tiny too, but this was a subject discussed rarely by adults and only in whispers.

A precocious child, I fired questions at Reverend Harrison during those catechism lessons. For example, when Eve bit that apple and discovered Adam's nakedness and a bunch of other skinny she was not supposed to know, God considered her act so disobedient she deserved banishment. My beef was this: If the incident was so terrible wasn't Eden changed by her behavior? How could the place be the same with the principal residents shamed and in exile?

As far as I could see, the garden of perfection was as tainted as our vegetable patch the year of the blight. Paradise with a crack, a damaged porcelain plate pushed to the back of the china cabinet. Because I was an Eve apologist, I pointed out that flaws might make Eden more fun and a heck of a lot more exciting than Wicomico Corners. It was the only time I ever recall Reverend Harrison reduced to speechlessness. Despite my heretical postulations, I passed ecclesiastical muster and earned the right to sip wine every Sunday. I was almost an adult.

Our rural county slumbered on through that last peaceable summer, its population still just a hair over the headcount it boasted during the American Revolution, but change was coming. Not just the building of new schools for the science project generation. Not just the clamour for the new stoplight at Helena to slow down the big rigs from up north. Change was disturbing the stately trees and chasing the ebbing tide. We sensed it stalking us, all sinew and ferocity poised on big cat's paws, and believed it would saunter down our claustrophobic peninsula from the grand national beyond, trapping us between our two salty, unforgiving rivers. We did not see it crouching, claws sheathed, eyes slanted, waiting for its moment, in our own hearts.