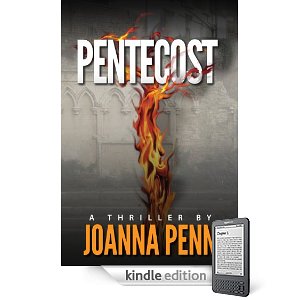 Joanna Penn, author of Pentecost, discusses her book, her journey as a writer, and self-publishing on Kindle.

DAVID WISEHART: What can you tell us about Pentecost?

JOANNA PENN: Pentecost is an action-adventure thriller—kind of Dan Brown meets Lara Croft in that it has religious/archaeological themes and a kick-ass female heroine. The premise of the story is that 2000 years ago the Apostles of Jesus took stones from the empty tomb after the resurrection and at Pentecost, the power of God infuses these stones which the Apostles wear as a symbol of their Brotherhood. The stones are handed down through generations of Keepers, kept hidden—until now. The book starts in the present day as the Keepers are being murdered and the stones hunted by people who have plans to use them for evil. Oxford University psychologist Morgan Sierra gets involved as her sister and niece are kidnapped by the bad guys and she has to race around the world finding the stones before Pentecost comes again. She is helped by Jake Timber from the mysterious ARKANE, a secret British government agency specializing in the paranormal. The book travels across the ancient Christian empire, from Iran, through Israel, Italy, Spain and down into Tunisia in the hunt for the stones. You’ll enjoy the book if you like a fast-paced read with visual action scenes in exotic locations!

JOANNA PENN: I always wanted to have a female protagonist, an intelligent, independent woman who could defend herself and also go on grand adventures. I also wanted her to be a psychologist so I started from there and then just started thinking about aspects of her personality. I keep a character sheet with details on it including back story about her parents and life before the story. I wanted to bring Israel into the mix so Morgan’s father was Jewish, originally from Spain but Morgan was brought up in Israel which has military service and gives her the skills for fighting and shooting that most Oxford University psychologists don’t have. For Jake and the main antagonist, Joseph, I made sure I kept character sheets for them too. I will further develop some of the characters for the next book so it’s important to keep tabs on how they are developing.

JOANNA PENN: Basically, it’s someone like me! I wrote the book because I’m a sucker for action-adventure thrillers and pick up anything that is remotely connected to religion or psychology—my twin obsessions. I wanted to write a series of books that I would enjoy writing and others with similar interests would enjoy reading. It’s meant to be an entertaining read, like seeing a great movie. It’s aimed to take you out of your life for a brief time. If you enjoy James Rollins, Douglas Preston & Lincoln Child or Raymond Khoury, you will enjoy Pentecost.

JOANNA PENN: I always wanted to write fiction but I was hampered for many years by the belief that I needed to write literary prize-winning fiction. Then a few years ago, I looked at my bookshelves and realized that I read mainly thrillers in fiction, so why didn’t I try to write what I love to read. I had already written a couple of non-fiction books and so I understood the process. I started the novel in NaNoWriMo 2009 and it was so much fun! I’m definitely a fiction writer now as well as an enthusiastic blogger.

JOANNA PENN: I’m just beginning the process again for the next novel in the series, Prophecy, which will feature Morgan and Jake and a new mystery based around religion and psychology. (I should say I have degrees in both disciplines so I have a background in these areas). Basically I spend at least a month thinking about ideas and “composting” them into a story. I start to create the outline which for me is just a basic document with scenes and point of view. I get to know the characters some more by creating the character sheets. Right now I’m coming up with my bad guy, which is brilliant fun. I also do research, so I’m looking at why people do things in the name of God and obedience to authority figures. Then I write the first draft in fits and starts whenever I can make the time (yes, I have a day job!). After that the editing starts and that takes longer than the first draft. Then I give the book to editors, proofreaders and then improve the book before moving into the publication process.

JOANNA PENN: I aim to be like James Rollins who is an awesome action-adventure thriller writer. I am also currently obsessed with the very successful writers who make a long career of writing and have lasted longer than all the rest. Margaret Atwood is someone I admire because she manages to write brilliantly and also embraces technology like twitter and virtual book signings.

JOANNA PENN: Umberto Eco’s Foucault’s Pendulum would be the first as that shaped my entire imagination and direction for writing. A more recent book I felt this way about was Angelology by Danielle Trussoni which has a brilliant theology embedded in the story. It’s a thinking person’s paranormal thriller/speculative fiction. (Sorry, that’s two!)

JOANNA PENN: A few years ago, I self-published my first book, a non-fiction career change book called How to Enjoy Your Job…Or Find A New One. It sold practically zero copies in the first six months because no one knew who I was. I tried traditional PR and made it onto national radio and TV but that didn’t sell copies. So then I started to learn about internet marketing and since then I’ve never looked back! I have a blog, The Creative Penn, voted as one of the Top 10 Blogs for Writers in 2010 where I post articles, video and audio about writing, publishing and book marketing. I also have a podcast on iTunes and a YouTube channel. I’m very active on twitter and Facebook and also do a load of other things. In terms of the launch of Pentecost, here’s a post where I go through all the marketing activities I did and how effective they were.

JOANNA PENN: Basically, I want to have a global market for my books and every day, more people buy Kindles and join the ebook party. I was one of the first people in Australia to get a Kindle and I have seen my reading habits change completely since then. I read 90% ebooks now, mostly from Amazon.com and in the last six months, I’ve seen the evidence on trains and with my friends that the shift is going mainstream. People are changing their habits, especially given that new fiction is around $30 a book in Australia. It’s a hugely expensive market. As a Kindle publisher I can have my book everywhere in the world with complete control over the price and the distribution. The only downside as a non-US author is that I have with-holding tax applied for tax reasons and also get paid by cheque which isn’t very efficient. I’m hoping Amazon will move to Paypal at some point (which is what Smashwords uses).

JOANNA PENN: My biggest advice is to have a budget for professional editing, cover design and formatting. These things will make your book better quality and you’ll get feedback and sales because of it. I’ve made those costs back within six weeks of publishing so you just have to think like a small business person. You also want to be proud of the product you’re putting out there. Another thing is to give away free copies prior to launch in order to get some reviews on the Kindle page before you do any hardcore marketing. This will give people social proof that it’s a good book. Clearly this is a risk as you can’t influence the reviews but if your book is excellent and you find people who like your genre, it will pay off.

DAVID WISEHART: Thanks, and best of luck with your books!

Joanna Penn is the author of Pentecost, a thriller novel out now on Amazon and other online retailers in print and ebook formats. Joanna has also written 3 other books, and blogs at TheCreativePenn.com: Adventures in writing, publishing and book marketing. Connect with Joanna on Twitter @thecreativepenn.