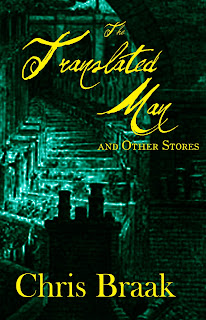 The Translated Man and Other Stories

"I've mentioned the Lovecraftian police procedural The Translated Man (also available on Kindle) before, and it deserves more than that glancing blow. There was a day reading this that I wanted to be able to read faster, because I wanted it in my brain faster. Blind sonar-using forensic maidens! Teen sidekicks practicing forbidden geometries! A skin disease that turns you invisible! Foppish gentlemen detectives dual-wielding pistols! A frank discussion of the shortcomings of adding a third leg to your shuffling undead behemoth! The heroes fight frikkin' science crimes. I WANT TO GO TO THERE."
—Jon Rogers, producer of TV's Leverage

"The city of Trowth is a fantastic creation reminiscent of China Miéville's New Crobuzon or maybe a grim, noir version of Pratchett's Ahnk-Morpork. Chris Braak has lovingly crafted centuries of detailed history that bring the city to creepy life. At times his expository passages slow the pace a tad but readers will enjoy learning about the Architecture War or the origins of the disenfranchised, snaggle-toothed sharpsie race that inhabits the worst slums of Trowth. Braak balances decidedly Dickensian descriptive writing with hard-boiled dialog reminiscent of Hammett or Chandler...my new favorite Dark-Land-of-Make-Believe."
—io9.com

The gray, icy city of Trowth is hollowed out by war, and now haunted by the degenerate spawn of a monstrous science. Elijah Beckett, a drug-addicted detective with a degenerative disease, stands firmly between the city and certain destruction. As Trowth begins to succumb to race riots, xenophobic terror, and its own clawing desperation, Beckett enlists the aid of Valentine, a young man faster with his pistols than his wits; Skinner, a woman with the power to hear around corners and psychically rap on walls a hundred yards away; and Alan Charterhouse, a boy with a gift for mathematics that just might get him killed.

The Translated Man and Other Stories also comes with four short pieces including "The Hangman's Daughter" (first published in Black Gate Magazine #14, and featured on Tangent Online's "Recommended Reading List 2010"), and the never-before-seen-or-heard-from "Cresy and the Sharpsie."

This is the first book in the four-part Corsay Books series. The sequel, Mr. Stitch, is also available now.