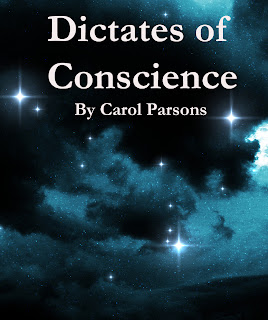 Excellently Crafted
"I am not a huge fan of Science Fiction novels, but Carol Parsons' Dictates of Conscience is most definitely a must-read. She is an extremely descriptive writer and knows how to weave a tale that quickly sucks readers in and refuses to let them go until the end. I would definitely read other books written by this author. "
—Book Mama "The Jenny"

A character-driven novel, Dictates of Conscience puts ordinary people in extraordinary circumstances where courage, loyalty and faith are tested to the nth degree.

How far would you go to save children slated for destruction?

Brietta Moran risks everything to protect the children under her care. She and her fellow Guardians are hard pressed as the government enacts stricter controls over birth rights. When her uncle and leader disappears after sending a request for help from the Patriots, Brietta takes charge. But a spy in their midst threatens to scatter the Guardians and undo all their efforts.

When Kynan Craig and Ganet rescue one of her charges, Brietta is suspicious of their motives. Can she trust them enough to save the children and help take down Gaillon?

Book Excerpt from Dictates of Conscience:

Kynan’s fingers tightened on the blaster. His gaze skittered across the area as he hunted for a way out. If they stayed much longer, the Imperium would sneak up from the outside and cut off their escape. He tucked one blaster back into his holster and began tugging at the crate sheltering them with one hand.

"What are you doing?" Ganet asked.

"Trying to cover our exit. If I can block the door partially with this crate, maybe we can get out. Otherwise, it's back to Kaelon's cell. Provided the Imperium don't drill us full of holes first and decide to ask questions later," Kynan said with a grunt. The box shifted a fraction of an inch. He kept working at the crate, until a good third covered the door. Kynan punched the open button and sweated as he waited for the door to recess back with a squeal.

"Now," he said, covering Ganet as the copilot dove out the doorway with his unresisting burden. Kynan followed, pulling the door close behind them. He took a scant second to blast the locking mechanism, then turned to find their situation still unimproved.

A small bevy of Imperium had Ganet and Kaelon pinned between the building's wall and the long, high ramp of the dock. Kynan squeezed off a few shots and jumped down beside his friend.

Kynan started to argue, but as Ganet slipped after Brietta he had no choice but to follow. The Bethcarian, descended from the ancient race that had walked with Melohi, had an uncanny ability to know friend from foe. Sometimes the copilot's instinct left Kynan battling a maelstrom of doubt. On the other hand, Kynan couldn't recall Ganet ever being wrong. The pilot pegged off another round at the pursuing Imperium, then chased after his friend and would be rescuer.

The girl led them down dimly lit byways, her flight filled with confusing twists and turns. Without warning she ducked into a small doorway, the men right behind her.

"Shh!" she hissed, locking the door. She pressed an ear against the wood and listened, trying to quiet her ragged breathing. Outside, the running feet of troopers beat a staccato march on the rutted pavement. In a few minutes, the noise died away.

Brietta saw Kynan draw a breath to yell at her and motioned with a sharp gesture for him to remain silent. In a faint wisp of sound, she told them, "They'll double back. Check doors."

She continued to listen at the door, shrinking back as the measured tread of two troopers paused outside to test the lock. Finding the door secure the Imperium moved on down the street.

When the tension went out of the girl's shoulders did Kynan speak in a controlled voice. "You almost got your head blown off sneaking up on us, but I guess we should thank you for saving our hides."

Brietta's glance was vinegary. "I didn't do it for you. I did it for Kaelon.”