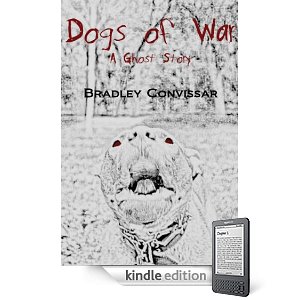 After divorcing his wife of two years, Gary Lettner thinks he has found the perfect house for himself and Molly, his eight-year-old daschund. But when the throats of the dead begin to cry out in a voice that only Molly can hear, and when evidence of past atrocities committed in his new home begin to surface, Gary finds himself an unlikely participant in a brutal quest for vengeance. Dogs of War is a brutal, heart-wrenching ghost stories that explores a world that thrives in the darkness.

Book Excerpt from Dogs of War:

When I awoke the following morning, Molly was not in bed. I slipped into my robe, took a quick piss, and made my way back to the kitchen.

Molly was where I had left her the night before, though she was now curled into a little ball on top of the rug instead of clawing maniacally at the sliding door. She lifted her head at my approach and looked at me with bloodshot eyes I had never witnessed on a dog before. She looked absolutely exhausted, and if she had been howling most of the night, I wouldn’t have been surprised.

I moved next to her, kneeled down and scratched her briefly behind an ear, then stood and peeled back a blind. The ghost dogs were gone, and as far as I could tell, there was no evidence that they had been there. But what evidence would ghosts leave behind? For a moment, I wondered if I really saw what I thought I saw. But I looked at Molly, at the utter fatigue in her face, and I knew that I had dreamt none of it. The ghost dogs had been real.

Sighing, wondering what to do next, if there was anything to do, I began brewing a pot of coffee. While the machine sputtered to life and began to force hot water through filtered coffee grinds, I opened the blinds to the back door, unlocked the sliding door, and heaved it open just enough to allow Molly to slip through. It was a heavy door, and I didn’t want to waste anymore energy than needed. I was tired, too.

Molly slowly clambered to her stumpy legs, wobbled for a moment, then made her way outside. I closed the door behind her; she would bark when it was time to let her back in. I watched her make her way over to the oak, watched as she sniffed around, looking for the perfect place to void her bladder, then turned and began to make breakfast. It was Saturday, and Saturday morning demanded a large, satisfying meal.

I prepared a three-egg Spanish omelet with peppers, cheese and salsa, two slices of wheat toast which I adorned with an obscene amount of sugar-free apricot jelly, four slices of turkey bacon, and a tall glass of orange juice over crushed ice. I set the entire meal on the kitchen table, along with a tall mug of my Kona coffee (black, two packets of sugar), next to my laptop.

Molly still hadn’t returned from her morning business, and I made my way to the back door, suddenly worried that she may be trying to dig her way out of the backyard. But when I looked out back, I saw her clearly by the oak, pawing at something among the massive roots. I allowed her her playtime and returned to the table, where I began to devour my breakfast while reading the day’s news on the computer.

I was in the middle of catching up on the week’s football news when I heard scratching and barking at the back door. I eased myself up and opened the door. Molly slithered past me into the center of the kitchen, then turned and sat on her haunches. Her tail whipped back and forth in excitement, her eyes practically shone with anticipation. There was something in her mouth, and she didn’t release it until I slid a hand under her muzzle. The object fell to my fingers, slick with saliva and spotted with dirt, but it didn’t take me long to identify it.

It was a bone.

I turned the six-inch-long object over in my hand, trying to identify it. I couldn’t tell exactly what it had once been part of, but based on the size, I knew it had never belonged to a rabbit or squirrel or chipmunk. It was too big. And it was too small to have once been part of a human skeleton.

I swallowed as an uneasy feeling began to creep over me. I remembered last night, remembered the ghost dogs. And now Molly was digging under the tree… I stood, returned to the back door and looked out. Swallowing again, I opened the door and moved into the yard, Molly close at my heels. I slowly made my way over to the area of disturbed ground and squatted next to the impromptu excavation site. Despite the thick dirt, I could make out other fragments poking up like bamboo shoots or resting on their sides like piping. Nervously, carefully, I began to move dirt away from what I knew were more bones, trying not to move anything.

It could just be the remains of a family cat or dog from one of the previous homeowners, I said to myself. It’s not a crime scene. You don’t have to be so meticulous.

I shuffled the dirt around, not knowing exactly what I was looking for. But minutes later I found it. I was poking around when suddenly a small patch of dirt the size of a quarter collapsed inward. I brushed off the dirt surrounding that hole, revealing the smooth bone of an eye socket. I removed more dirt and discovered a muzzle, nostril holes, teeth.

I removed more dirt from the burial site but was careful not to remove any of the bigger bones. I found another skull and a thick jawbone.

Not knowing what else to do, I called the police.

That's it, if you need anything else from me, let me know. By the way...Just want to give you a head's up- Amazon is being a little cranky right now. If I search for the book using the ASIN, it does NOT find the book. But it exists and you can access it directly through the link above. And there is no problem setting up an affiliate widget once you are on the page; I tried it myself and even downloaded a sample to make sure it worked, and it does. But if you have any issues, let me know.