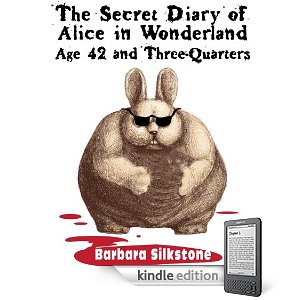 The Secret Diary of Alice in Wonderland, Age 42 and Three-Quarters

5 Stars
"I started reading at about 9:00 in the evening on a weekend night. I finished at 2:30 the following A.M. So this is what I usually call a 'Rabbit Hole' book. Translation: A book that sucks you in to its reality so strongly you can't let go until it spits you out or ends. The author has an authentic comic voice, one that kept me throughout. The Pythonesque quality is happily married to the Standard American Wish Fulfillment template which is funny and true on so many levels."
—Sonja A. Bock ~ Bock on Broadway

5 Stars
"Alice Harte's problems begin when she's kidnapped by Marc Hare, a thug looking to bring down her less-than-honest boss, Leslie Archer. She's let go on the agreement that she WILL help Hare and things only go downhill from there. In a desperate attempt to escape from her troubles, Alice naively takes up an on-line dating romance with Nigel from England. When she takes the romance one step further by agreeing to a whirlwind meet-up with him in Europe, things get even stranger. Alice has definitely fallen down the rabbit hole and the question is, will she find her way out? This was a thoroughly enjoyable read from the very first page. Author Barbara Silkstone knows how to spin a witty tale with zippy lines and fun characters in zany circumstances. If you like wacky mysteries with a bunch of fun thrown in, then this is a book for you. HIGHLY RECOMMENDED."
Karen Cantwell ~ Take the Monkeys and Run

5 Stars
"I was prepared to not like this book. While the premise did sound interesting, I just felt that it was not going to be something I could really get my heart into. Mistake... I read it straight through, staying up until the wee hours of the morning - on a work night! This should be required reading for anyone who is participating in online dating (or thinking of doing so). Don't get me wrong - this was a very clever, quirky, and laugh-out-loud story, but it did have a tale to tell and a warning to convey, however humorously. Even Wonderland is not immune to human nature. Definitely recommended."
—SingleEyePhotos

5 Stars
"I LOVED this book!! Alice was a trip and I was laughing out loud numerous times. One of my favorites was the pantyhose and the long toenails on 'someone' (don't want to say too much!). Anyone who likes funny chick-lit will love this book!"
—Bunny Hugger

This urban fantasy is set in Miami and London. Fans of Stephanie Plum will cheer for Alice as she watches her back in attempting to keep her head, while being stalked by Nigel's daft ex-wife and inept, but dangerous mobsters. Alice's world is filled with memorable characters strangely reminiscent of Alice in Wonderland. She's guided through her dangerous adventure by her own Cheshire Cat.

Nigel, a chubby John Cleese with serious dress-code problems, whisks Alice to England. Alice sees him as her White Rabbit rescuer. The plot trips along at a cracking pace with Alice flinging zingers like a drive-by shooter.

After Alice discovers a gangster's freshly beheaded body in his Miami mansion, she launches a desperate self-defense in a kangaroo court. The main witness against her is Algy Green, a bumbling cockney swindler who super-glues his bat wing ears to his head and commits perjury for theme park tickets. But in the middle of the trial a small piece of evidence opens her eyes.

Book Excerpt from The Secret Diary of Alice in Wonderland, Age 42 and Three-Quarters:

Let me count the ways this could go bad – Sunglasses wants to eliminate me as a witness before he murders Leslie, the police are watching Sunglasses and I’ll get caught up in his arrest, I could be an accessory to Leslie’s murder, or maybe it wasn’t Sunglasses on the phone at all… maybe it was Leslie, disguising his voice. I pinched my right thigh to distract me; my leg was trembling so hard it bounced off the gas pedal. Chills ran through me like a bad flu.

Think positive. Deep breath. I followed his directions as best I could. The house was waterfront in one of those old Miami neighborhoods that are more like mazes where you follow the openings until you find yourself at a dead end. The old brick streets meandered, never straight, forking around two hundred year old banyan trees and round crumbling walls, each overgrown driveway hiding what was at its end.

He had instructed me to look for a post with a sea turtle on it, fake I hoped. There it was, a stone figure of the Mock Turtle looking just like he did in Alice in Wonderland. He was posted at the entrance to a drive heavy with tropical trees forming an eerie canopy. If I was setting me up, it would be in a place just like this.

At the next split in the road, I parked the Jeep and walked back to the turtle sign post. I was not about to drive right up to whatever lay just out of my sight. Everything’s going to be okay. Deep breath. You need the money for a lawyer.

I walked quietly up the drive, stopping every few steps to listen. I didn’t hear axes being sharpened. No gun fire. It was all good.

The sound of feet walking on gravel. A car door opened and slammed. An engine started. I threw myself on the ground just off the driveway. I looked up in time to see Leslie’s Lamborghini. The car came within inches of my head as it sped away.

Decision time. Run like hell or march into it.

Sunglasses’ fortress was an old Spanish-style estate made of stone and iron. The grounds were lit with an orange glow like a smoggy day in L.A. I pressed the bell and waited. No response. This big house should have some kind of butler or maid or machine-gun-toting giant. I pounded on the rustic wooden door. No answer.

Drawn to sounds of opera music from a glass-enclosed wing to the right of the house, I made my way to French doors. I stood on my toes ready for flight and pressed my nose to the glass, careful not to leave any fingerprints or pick up any germs from the door handle. The room was a study in gilt and gaudy. It looked like it had been furnished by Godfather-To-Go by way of the British Museum.

I knocked on the glass. No response. The door swung open and I stepped in to the last few notes of Madame Butterfly. “Mr. Hare?”

Sunglasses sat with his back to me in a high-topped leather chair. He wore a red shirt and what looked like black slacks. “Mr. Hare?”

I got that shaky feeling you get when something isn’t right. It wasn’t like my arms were growing or my legs were shrinking. It was more like the taste of metal in my mouth.

Stepping to his left side, I touched the gangster’s shoulder. It was sticky. I looked at my hand. Blood. And germs. God knows what this man has. And then reality kicked in and for one horrifying moment his head lulled on his neck, rolled onto his right arm, and hit the floor with a crunch-splat. My mind spun. I was pretty sure he was dead; and Leslie did it. Sunglasses must have told him he had the tape recording of his confession of Jug Hare’s murder. That meant Leslie was wise to Maris and probably me.

Eeewww… blood on my hand. I looked around for wipes. There was a small door across the room and to the right. A bathroom? But to get there I had to walk around dropping more of my DNA all over the floor. I focused on the little door and ignored the head on the floor behind the desk. If I touched the knob I’d leave finger prints. I could open it with my mouth… ick. What was I thinking?

I could grab the knob through my sweater, but I’d have to throw it away. My black turtle neck was one of my favorites. I worked my hand under the fabric and created a mitten. The knob stuck. I pulled more of my sweater into the twist and it released. It was a bathroom. I elbowed the light switch and grabbed a handful of tissues from a red and gold box on the counter. Using the paper I turned on the faucet.

Sunglasses’ blood was on my hands, both lit and fig. It flowed in pink and crimson streams into the sink and down the drain. I kept the water running and threw the tissue in the toilet; I grabbed a second paper to flush the handle. My stomach was about to contribute to the drain – I talked myself out of it.

I glanced over my shoulder at the crime scene, trying to ignore the fact that there was a large bloody head on the floor next to the desk. What had I touched? The French door handles?

Sunglasses shoulder. I was not about to re-touch the body. If my finger prints were there, they would stay there. I clicked off the light switch.

The sound of a car door slamming sent me to the floor. I peeked around the bathroom door jamb.