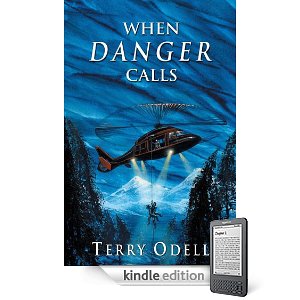 Terry Odell, author of When Danger Calls, discusses her book, her journey as a writer, and self-publishing on Kindle.

DAVID WISEHART: What can you tell us about When Danger Calls?

TERRY ODELL: When Danger Calls is the first in my Blackthorne, Inc. series.

If someone asks single mother Frankie Castor to clear a room, she'll smile and find a vacuum cleaner. Ryan Harper uses a gun. Can they work together when their lives depend on it?

Frankie’s returned to her childhood home in Montana to help care for her mother. Her biggest worries are balancing the budget and the upkeep of an aging home. When she offers a man a ride home from the hospital, she never imagines she’ll end up having to choose between her daughter’s life and matters of national security that could cost the lives of millions. Ryan returns to his family home to find a way to prove he didn’t leak vital information on a covert ops mission gone south. As he searches for the meaning of a file he’s kept hidden from the mission, he has no idea that international mercenaries have been searching for it—and him. When the mercenaries come after Ryan, he’s torn. Fighting for his country wars with fighting to rescue people he loves. Set against a Montana mountain backdrop, When Danger Calls is a story filled with action, adventure, and romance, where the stakes keep getting higher and higher.

TERRY ODELL: I start by giving my characters what seem to be reasonable goals. In When Danger Calls, the heroine is driven by family loyalties. She's a single mom with a decent career, but quits her job and moves across country to keep an eye on her elderly mother. From that point, I ask myself what obstacles I can throw in her path, escalating the stakes until by the end of the book, she's coming face to face with terrorists. It's a matter of giving her a goal in every scene, and then blocking the path to achieving it. Or, sometimes, letting her achieve it but having it backfire.

For Ryan, my hero, he's a covert ops specialist and good at his job. So when his last two missions go south, and he's accused of being the leak, or worse, the traitor, he quits his job and sets off to find the real culprit and clear his name. And I'm going to keep doing what I can to make sure he can't get what he wants. At least not easily.

TERRY ODELL: I'm very much a character-oriented reader and writer. I usually start with either the hero or heroine. Once I know what they want, I'll find another character who seems to have the opposite goals. For example, in When Danger Calls, I started with Ryan, a covert ops specialist. On a recent mission, he was unable to save a young girl, who died in his arms. To create conflict, I throw him a heroine who's a single mother, who has a child about the same age. For Frankie, she's not looking for a husband. First and foremost, a man has to be someone who will love her daughter. Then, using the mystery/suspense plot lines, I can bring them together and pull them apart.

As for differentiating characters, I think it's important to have secondary characters to help show more about the main characters. In When Danger Calls, Ryan deals with his ex-partner, Dalton, who's an outgoing Texan, known to have the best poker face on the team, and able to scam anything. He's quite different from the reserved, quiet Ryan. And the fun for me is that I get to write Dalton's story in the upcoming sequel, Where Danger Hides.

TERRY ODELL: In a nutshell—someone like me. I write the books I want to read. I'm looking for a good story with characters I can love.

TERRY ODELL: How much time do you have? I did NOT write my first book in crayon. I never had dreams of being a writer. The short answer is, "I ran out of room on my walls for needlepoint and needed a creative outlet." But once I started writing, (and I was a card-carrying AARP member before tackling my first story, which was a Highlander fan-fiction short story), I found it's as important as breathing. I decided to try writing an original story, where the characters weren't already established. I thought it was a mystery, but my daughters insisted it was a romance. It was picked up by what was then Cerridwen Press, an electronic publisher, so I've been writing for the digital market long before the Kindle came into being.

TERRY ODELL: I start with the character conflict I described above. I normally write about a scene a day. I'll read what I wrote at night, catch any errors or problems, and then the next day I'll go back and fix the scene, then move on. I'll decide what plot points and conflict need to be in the scene. I generally don't know where I'm going until I get there. I have no problem deciding that "something bad will happen" without worrying about what it is. For When Danger Calls, I knew Ryan had taken a file from his failed mission, and that it would be important, but I didn't really know what it was until well into the book.

TERRY ODELL: I say I have two categories of authors who inspire me. The first are the ones who, after reading, make me say, "I'll never be able to write like that." The second are the ones who inspire me to keep writing—the ones who make me say, "This guy got published, and I can write much better than that," so I keep going. I look at my first mentor, Sandra McDonald, who taught me the basics. The late Barbara Parker always had time and advice, sometimes painful to take, but it helped me grow. Suzanne Brockmann and JD Robb's characters and voices definitely fall into category one.

TERRY ODELL: That's a tough one. I think most of my books have bits and pieces of so many others, but from the time I was a child, I was always "fixing" stories so they came out the way I wanted them to. So even if I had a book that I wish I'd written, I'd probably have written it differently. If you insist on a title, I'd say Naked in Death by JD Robb. I read it, and immediately went to the bookstore and bought the remaining (at that time) 14 books in the series. But again, it was because of the characters more than the story.

TERRY ODELL: I prefer to market "me"—I'll have 6 books out as of mid-June, I'm not marketing a single series. I have a website: http://www.terryodell.com and a blog: http://terryodell.blogspot.com. I go to conferences. I give workshops, both "live" and on-line. I have a Facebook page: http://www.facebook.com/terry.odell and a Twitter identity (@authorterryo). I belong to MWA and its Rocky Mountain chapter, and RWA, and its Pikes Peak chapter. I also belong to Backlist eBooks, a group of authors who are re-publishing their back lists in digital formats.

TERRY ODELL: Why not? I was publishing with digital publishers before Kindles existed, and with the advent of so many new reading devices, making books available in as many formats as possible seems a logical step. Where I live, there are no bookstores, and the library is 15 miles down the mountain. Reading on an e-reader is much easier for me, and buying books with a click is a no-brainer. Plus, the digital market is less "restricted" than the big print publishers. I don't write in the box, and I don't like being pigeonholed, so e-publishing gives me a chance to tell the stories I want to tell. With the exception of my free short stories, all my books are available for the Kindle. I'd have those there, too, but Amazon doesn't let authors give away stories.

TERRY ODELL: Make sure you're not publishing because you're getting rejections from agents or editors. It shouldn't be a shortcut. Understand why it's not being picked up. It could be because it's not ready. Have people who know the business read it, even if it means paying for it. An unedited manuscript will hurt your career. Yes, it's an investment of time and money, but you want to get quality out there.

Terry Odell took up writing when she ran out of space on her walls for needlepoint and needed another creative outlet. She began writing what she thought was a mystery, until her daughters told her it was a romance. An avid mystery reader, she now combines her love of mystery with the happily ever after of romance. She is the author of six romantic suspense novels, with three publishers. She’s been a finalist in the Daphne du Maurier, the Gayle Wilson Award of Excellence, the Aspen Gold, as well as placing in the Laurel Wreath, and Best of the Best from Night Owl Romances. In addition, she is the author of numerous contemporary romance short stories with The Wild Rose Press.

When she writes, one of her favorite methods of developing characters is to shove them together and listen to them talk. She enjoys sharing what she’s learned about writing with others, and has given workshops for libraries and writing groups. A graduate of UCLA, she now makes her home in the mountains of Colorado where she can work on her next book and watch the wildlife from her window.

Discover new writers! Subscribe to the FREE Kindle Author Newsletter.
Posted by kucinx at 12:57 AM