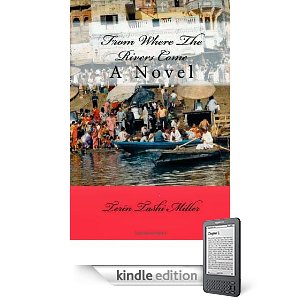 Terin Tashi Miller, author of From Where the Rivers Come, discusses his book, his journey as a writer, and self-publishing on Kindle.

DAVID WISEHART: What can you tell us about From Where the Rivers Come?

TERIN TASHI MILLER: From Where The Rivers Come was my first "serious" novel. That means I put a fair amount of thought into how I wanted to present the story, what the story was, and why I couldn't stop coming back to it. It's set in India, where I have lived on-and-off for a number of years, and where I spent several "formative" years. It's ultimately a story about cultural differences and miscommunication between people who either are sensitive to another culture's religion or moral or social rules, or aren't. And my experience was that, despite the best intentions, many non-Asians are blissfully ignorant of causing offense or trampling on other cultures, even in the midst of them. I think it may be because there's a cultural arrogance that people don't even realize they have. And that arrogance leads people to believe that what they believe or how they behave is right, or appropriate, or doesn't matter to others, and doesn't allow the possibility that just because we or our friends believe something doesn't mean it is right.

TERIN TASHI MILLER: That is an excellent question. As my characters tend to be based—loosely—on people I've met, or people I know, I think I develop them both in the story and outside of the story because I know who they are before they ever appear. And then, when they talk or dress or interact, they come alive. As the individuals I know them to be.

TERIN TASHI MILLER: My ideal reader, I guess, is someone who is interested in moral dilemmas. Someone who either has experience in a "foreign" environment, or finds such experience interesting, exciting, and maybe enjoys them vicariously. I like to put moral dilemmas in a foreign environment because it seems—has always seemed—to me to be part of the way literature can draw attention to something that otherwise, if it were happening outside your door or in your neighborhood or even in your home, might be overlooked  Somehow, seeing the dilemma or how it is dealt with somewhere else by someone else seems to help readers wonder: "what would I do in that situation?"

TERIN TASHI MILLER: Whew. My journey as a writer. Jeez, I hope it isn't over. People are always saying life isn't the end it's the adventure—the journey. If you're asking how I got to here, self-publishing a couple of novels, the answer is several twists of fate. The first being when I was 17 years old and a friend of a friend became my first literary agent based on a short story I'd published in our high school literary magazine. That agent, Ray Puechner, is both to blame and thank for convincing me to try and write my first novel, and encouraging me and continually insisting he knew he was right: I was someone who could write. Unfortunately, I wasn't someone whose writing he could sell, try as hard as he did—and he did, believe me—until the day he died in 1987 of cancer. Every day I get a rejection, I blame Ray for infecting me with what we jokingly referred to before his cancer as the terminal disease of writing. And the days when it goes well, like when I see my novel on Amazon, or get to do an interview, or even finish a manuscript I really, really like, I thank him and regret like hell he isn't around to see his faith in me confirmed. Ray Puechner was my literary father, more than anyone. And I miss him. Every day. My journey as a writer started with him, and when at times I think I'm done, I no longer want to spend time at it, it's like he won't let me quit. "As long as there is something you can do, you do it..." My father, too, was an inspiration, though in a different way. My father was a well-respected professor of anthropology when he died, as was my mother. But my father won the 1946 Hopwood Award contest at the University of Michigan for an essay he wrote about a Spanish Civil War and World War II veteran reminiscing about fighting Fascism.

TERIN TASHI MILLER: Well, as I have to earn a living in journalism, and have an 8-year-old son, and a wife who is a classical musician, I have to make time to write my fiction. I've been writing on my hour-long commute by train to work every weekday, and I often insist on stealing some time on either a weekend or an occasional weekday to concentrate on things I'm developing well. That's how I worked on Rivers, and my latest novel, Down The Low Road. And have written two others since.

TERIN TASHI MILLER: Facebook, PublishersVault, Amazon, CreateSpace, Barnes & Noble and Redroom all are places from which to find ways to purchase my work or read excerpts. I've sold copies in my local bookstore, visited book clubs, and generally try to make myself and my work available to anyone who expresses an interest—including fellow commuters!

TERIN TASHI MILLER: Kindle has to be one of the greatest, most rapidly spreading inventions of the current century. The ebook phenomenon, really "kindled" by Kindle, has made publication much easier for authors, and access to works much easier—and less expensive—for readers and potential readers. When asked, I often compare the appearance of the Kindle and Amazon's digital text platform to the appearance of paperbacks in France at the beginning of the last century. Paperbacks made literature accessible to pretty much everyone and anyone who could or perhaps wanted to read. My parents, who grew up during The Great Depression, often talked about coal miners who had better collections of "classic" literature than some university libraries, thanks to the paperback. And the Kindle weighs far less than carrying all those books around, and takes up far less space in a living room or closet-sized studio apartment or dorm.

TERIN TASHI MILLER: Do it. Make sure before you do that you won't be embarrassed by publishing something before you think it's really ready. And offer it at a price you'd be willing to pay for it, or you don't think you'd be ripping off your friends. And thanks to Amazon, you can get a far better royalty deal than if you signed with a "traditional" publisher—who, by the way, would likely leave most of your book promotion after distribution up to you, just as it is for me now.

Terin Tashi Miller spent many of his formative years in India, the child of anthropologist parents. Since then, he has lived and worked in a variety of countries in Europe and Asia.

His writing has appeared in guide books, international magazines including Time and Geografica Revista, and newspapers including The Wall Street Journal, The Dallas Morning News, and The Los Angeles Times.

He began his writing career as a part-time reporter for Time magazine, then worked for The Associated Press in India and North Dakota and AP-Dow Jones News Services in Spain and New York, and as a reporter for The Fort Worth Star-Telegram, The Milwaukee Sentinel, Amarillo Daily News, and the Hilton Head Island Packet.

Born in St. Louis, Mo., and raised in Madison, Wis. and several provinces in India, he currently lives in New Jersey.