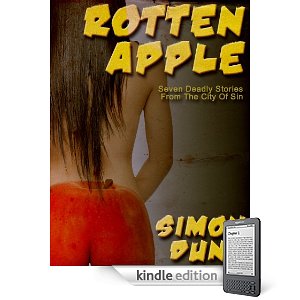 Simon Dunn, author of Rotten Apple, discusses his book, his journey as a writer, and self-publishing on Kindle.

DAVID WISEHART: What can you tell us about Rotten Apple?

SIMON DUNN: In the words of one Amazon review it's "a noir masterpiece. A stirring and fast-paced action spectacular from start to finish, Rotten Apple pulls no punches in shedding light on the dark underbelly of one of the world's most intriguing cities. Parodying the conventions of classic pulp, Simon Dunn gives us an anti-hero we can be proud of: Vic Malone—cop, rebel, lover, and all-round tough-nut. Never flinching, relentless in his adherence to justice, he rightly deserves to become a household name. Great fun!"

It's none of those things really, it's just utterly daft. But I like that my readers have entered in to the spirit of it.

SIMON DUNN: That's a good question. When I write scripts it's important to make them sound different, so I write them with accents, which I never actually specify them in the script. It's a short-hand way of doing it. But I think character is often confused with characteristics. If your main character has strong and identifiable motives and desires, structurally the supporting cast must compliment or oppose them.

When I wrote Rotten Apple, however, I was parodying the worst excesses of the noir genre, so I resorted to stereotypes and cliches. Where that would be terrible in straight writing, this thinly drawn nature was ideal to amplify the intended effect.

I suppose every writer steals characteristics from themselves and people they know, but a lot of the time, the characters just find their own voices really.

SIMON DUNN: Someone who giggles at the things that make me laugh.

The trouble with writing (and performing) comedy, is that everyone thinks they have a sense of humour, and therefore all comedy is aimed at them. So if it fails to make them laugh, it must be bad comedy. It's the only genre that has the appearance of universal appeal. Not everyone looks at The Wire and thinks it's for them. Likewise Glee. Or Friday Night Lights. But they don't automatically label them bad drama. It's a constant and unfair battle for comedians and comedy writers, which is why we sulk a lot.

SIMON DUNN: I've been writing since the day my dad bought home a Word Processor. During my final year at university I landed my first television commission, and since then I've been writing comedy for the BBC and Channel Four in the UK. More recently I've begun developing drama for various production companies.

SIMON DUNN: I’m a structure geek, as you need to be with screenwriting. I spend more time on structuring the story than anything else. Once that’s hammered out, the actual typing is a quick process. I work at the same times every day, from midday to four, then six to ten, then midnight to two.

SIMON DUNN: To be honest, I'm more inspired by great screenwriters like Aaron Sorkin, David Simon or Joss Whedon, but authors that I like include David Lodge, Mark Gatiss, Malcolm Pryce, Tom Sharpe and Stephen Fry.

SIMON DUNN: The Hitchhikers' Guide To The Galaxy by Douglas Adams. Or The Liar by Stephen Fry. That's two books. I'm rubbish at these games.

SIMON DUNN: This is where I fall down really—I hate self-promotion, and I always feel like such a twunt when I do it. But lots of tweeting, using Facebook and forums, plus I'm lucky to have a fairly large audience for my podcast Sundays Supplement, and they're lovely and supportive.

SIMON DUNN: I became fascinated with the Kindle adventures as blogged by Lee Goldberg, a writer I admire, and decided to embark on my own experiment. It helped that Rotten Apple is a collection of interwoven short stories, which don't appeal to trad publishers so much. It's also refreshing to see that self-publishing has shaken itself free from the shadowy hands of the vanity presses.

SIMON DUNN: Do it. But don't do it to emulate JA Konrath or Amanda Hocking. Do it because you are a writer and you love writing. The publishing format is irrelevant.

Simon is a scriptwriter and comedian in the UK. He has written for International Emmy Award-winning comedy shows, and is currently developing drama ideas for British television.

Visit his website, which is recommended by the Guardian newspaper in the UK as a good resource for writers.