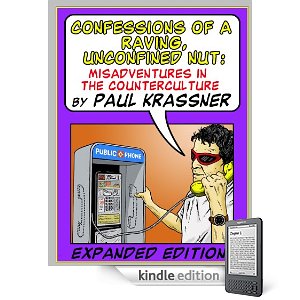 Paul Krassner, author of Confessions of a Raving, Unconfined Nut: Misadventures in the Counterculture, discusses his book, his journey as a writer, and self-publishing on Kindle.

DAVID WISEHART: What can you tell us about Confessions of a Raving, Unconfined Nut: Misadventures in the Counterculture?

PAUL KRASSNER: In December 2010, the writers' organization PEN presented me with their Lifetime Achievement Award. This book provides the reason for that honor. It's an expanded edition of my autobiography, originally published by Simon & Schuster in 1993. Since then, all rights were reverted back to me, and I decided to self-publish this time.

In Confessions, there’s a chapter on my friendship with controversial comic Lenny Bruce—which blossomed when I edited his autobiography, How to Talk Dirty and Influence People—and a chapter on my association with Hustler publisher Larry Flynt, plus my investigation of Scientology and Charles Manson. There’s an entire chapter, “The Parts Left Out of the Kennedy Book,” about my most notorious article.

Here’s the origin of the book’s title: A couple of FBI agents came to one of my stand-up performances and stated in their report, “He purported to be humorous about government policies.” My FBI files indicate that after Life magazine published a favorable profile of me, the FBI sent a poison-pen letter to the editor, complaining: “To classify Krassner as a social rebel is far too cute. He’s a nut, a raving, unconfined nut.”

DAVID WISEHART: What was your most memorable "misadventure"?

PAUL KRASSNER: It’s a tie between attending the Grateful Dead outdoor concerts in Egypt and the time I ingested a tab of LSD before testifying in the Chicago Conspiracy Trial. Suddenly I was thrust into the middle of a Looney Tunes cartoon. It happened at the precise moment that I was escorted into the courtroom by Tom Hayden and Jerry Rubin—or, as I perceived then, Tom and Jerry. The furniture started dancing merrily. Judge Julius Hoffman looked exactly like Elmer Fudd. I expected him to proclaim, “Let’s git them pesky wadicals!”

PAUL KRASSNER: I wrote for Mad but that was aimed at teenagers and there was no satirical magazine for adults, so I launched a groundbreaking satirical magazine, The Realist, from 1958 to 1974, and reincarnated it as a newsletter in 1985. “The taboos may have changed,” I wrote, “but irreverence is still our only sacred cow.” When People magazine called me “Father of the underground press,” I immediately demanded a paternity test. The final issue was published in Spring 2001. All the issues are online at The Realist Archive Project.

My style of personal journalism constantly blurred the line between observer and participant. I interviewed a doctor who performed abortions when it was illegal; then ran an underground abortion referral service. I covered the antiwar movement; then co-founded the Yippies with Abbie Hoffman (writing a few animated re-enactment scenes for the documentary Chicago 10 four decades later). I published material on the psychedelic revolution; then took LSD with Timothy Leary, Ram Dass, and Ken Kesey, later accompanying Groucho Marx on his first and only acid trip. The most gratifying feedback came from three of my own influences:

George Carlin: “Paul’s own writing, in particular, seemed daring and adventurous to me; it took big chances and made important arguments in relentlessly funny ways. I felt, down deep, that maybe I had some of that in me, too; that maybe I could be using my skills to better express my beliefs. The Realist was the inspiration that kept pushing me to the next level; there was no way I could continue reading it and remain the same.”

Kurt Vonnegut: “I told Krassner one time that his writings made me hopeful. He found this an odd compliment to offer a satirist. I explained that he made supposedly serious matters seem ridiculous, and that this inspired many of his readers to decide for themselves what was ridiculous and what was not. Knowing that there were people doing that, better late than never, made me optimistic.”

Lewis Black: “I have been a fan of his since I was a snot-nosed kid, and his words have been a driving force and influence on my life. If you have read his work before, you know the joys that you are in for. If you haven’t, start reading, and consider this your lucky day. For Paul Krassner is an activist, a philosopher, a lunatic and a saint, but most of all he is funny.”

PAUL KRASSNER: I keep a pen and pad in my pocket, in my office, the living room, the dining room, the bedroom, the bathroom, keeping notes on ideas that stem from contradictions, hypocrisy and absurdity in the news as well as notions that pop up from my subconscious. These get transferred to my computer and developed further. I always work from an outline that also surrenders to spontaneity, imagination and metaphorical truth triggered by the facts.

PAUL KRASSNER: Joseph Heller’s Catch 22 was my biggest inspiration, but I also appreciate tidbits in the news, such as an item that mentioned a political wife who called a journalist in the middle of the night and confided about her husband’s corruption, fully aware that it would be reported the next day; I thought that the choice of the word “confided” was appropriate sarcasm.

PAUL KRASSNER: Johnny Got His Gun by Dalton Trumbo, about a soldier who was wounded so severely that he was limbless, blind, and a deaf mute. He had to learn when he was awake and when he was dreaming. All he had left in the shell of his body was his consciousness and the utter need to communicate.

PAUL KRASSNER: Interviews on print and electronic media, bookstore readings, magazine essays, newspaper op-eds and mini-excerpts Facebook, which I recently quit, because 5000+ friends became a distraction from my current obsession—working on my first novel, about a contemporary controversial Lenny Bruce-type performer.

PAUL KRASSNER: Simple—to dive into the new media and reach potential readers who no longer buy physical books which are less convenient and more expensive. I’ve become almost as much in awe of technology as I am of Nature.

PAUL KRASSNER: Why not? You don’t need a literary agent or a publisher who can keep you waiting for six months to a year. And it’s not an either/or situation where one must decide between paper and online publication. You can do both. 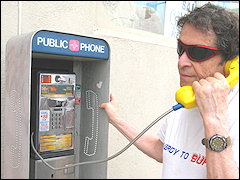 Paul Krassner calls himself an investigative satirist. Don Imus labeled him “one of the comic geniuses of the 20th century.” And, according to the Los Angeles Reader, “Krassner delivers 90 minutes of the funniest, most intelligent social and political commentary in town.”

On the other hand, a couple of FBI agents went to one of his performances and stated in their report, “He purported to be humorous about government policies.” His FBI files indicate that after Life magazine published a favorable profile of him, the FBI sent a poison-pen letter to the editor, complaining: “To classify Krassner as a social rebel is far too cute. He’s a nut, a raving, unconfined nut.”

“The FBI was right,” says George Carlin. “This man is dangerous—and funny; and necessary.”

ABC newscaster Harry Reasoner wrote in his memoirs, “Krassner not only attacks establishment values; he attacks decency in general.” So Krassner named his one-person show Attacking Decency in General, receiving awards from the L.A. Weekly and DramaLogue. He is the only person in the world ever to win awards from both Playboy (for satire) and the Feminist Party Media Workshop (for journalism). When People magazine called Krassner “Father of the underground press,” he immediately demanded a paternity test. Actually, he had published The Realist magazine from 1958 to 1974. He reincarnated it as a newsletter in 1985. “The taboos may have changed,” he wrote, “but irreverence is still our only sacred cow.” The final issue was published in Spring 2001.

He was nominated for a 2005 Grammy Award in the Album Notes category for his 5,000-word essay accompanying a 6-CD package, Lenny Bruce: Let the Buyer Beware. Krassner rarely works the comedy-club circuit, preferring to perform on campuses, at theaters and in art galleries.

He has been a guest on Late Night with Conan O’Brien and Politically Incorrect with Bill Maher; on Air America Radio with Janeane Garofalo and on WTFpod.com with Marc Maron. He hosted his own radio call-in show in San Francisco.

His venues have ranged from the New Age Expo to the Skeptics Conference, from a Neo-Pagan Festival to the L.A. County Bar Association, from a Swingers Convention to the Brentwood Bakery, where members of the audience were each given a free pastry of their choice. Over the years, he has built up a cult following that has steadily been edging into mainstream awareness.

His reviews have been highly complimentary. The New York Times: “He is an expert at ferreting out hypocrisy and absurdism from the more solemn crannies of American culture.” The Los Angeles Times: “He has the uncanny ability to alter your perceptions permanently.” The San Francisco Chronicle: “Krassner is absolutely compelling. He has lived on the edge so long he gets his mail delivered there.”

He was head writer for an HBO special satirizing the 1980 presidential election campaign, did on-air commentary for the Fox network’s Wilton-North Report, and—a decade after poking fun at Ronald Reagan—was a writer on Ron Reagan’s syndicated late-night TV talk show.

Mercury Records released his first two comedy albums, We Have Ways of Making You Laugh and Brain Damage Control. Artemis Records released his next four: Sex, Drugs and the Antichrist: Paul Krassner at MIT, Campaign in the Ass, Irony Lives! and The Zen Bastard Rides Again.

His autobiography, Confessions of a Raving, Unconfined Nut: Misadventures in the Counter-Culture, published by Simon & Schuster, sold 30,000 copies. An expanded edition is now available on Paul's website and also as an e-book on Kindle.

His other books include: The Winner of the Slow Bicycle Race: The Satirical Writings of Paul Krassner, with an introduction by Kurt Vonnegut; a trilogy of anthologies—Pot Stories For the Soul, with an introduction by Harlan Ellison, Psychedelic Trips For the Mind and Magic Mushrooms and Other Highs: From Toad Slime to Ecstasy—Sex, Drugs and the Twinkie Murders: 40 Years of Countercultural Journalism; Impolite Interviews; Murder At the Conspiracy Convention and Other American Absurdities, with an introduction by George Carlin; One Hand Jerking: Reports From an Investigative Satirist, with a foreword by Harry Shearer and an introduction by Lewis Black; In Praise of Indecency: Dispatches From the Valley of Porn; and Who's to Say What's Obscene: Politics, Culture & Comedy in America Today, with a foreword by Arianna Huffington.

In May 2004, he received an ACLU Uppie (Upton Sinclair) Award for dedication to freedom of expression. At the 14th annual Cannabis Cup in Amsterdam, Paul Krassner was inducted into the Counterculture Hall of Fame, “my ambition,” he claims, “since I was three years old.” In December, 2010, the writers' organization PEN honored him with their Lifetime Achievement Award. “I'm very happy to receive this award,” Paul concluded in his acceptance speech, “and even happier that it wasn't posthumous.”