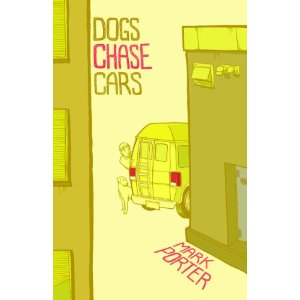 Mark Porter, author of Dogs Chase Cars, discusses his book, his journey as a writer, and self-publishing on Kindle.

DAVID WISEHART: What can you tell us about Dogs Chase Cars?

MARK PORTER: Dogs Chase Cars is a comic mystery set in Takoma Park, Maryland. The central character and narrator is an Englishman (Harry Hoodman) who has traded his store detective job for private detective status, in order to prove to his partner Megan that he can be relied upon to pull his weight. Harry is often awkward socially, he is a thinking man but struggles to motivate himself into action and feels that life is sliding past him faster than he can apply the breaks. When one of his friends is shot, Harry and the other characters attempt to fix their various issues through helping each other and trying to solve the identity of the assailant. Meanwhile, Harry is in therapy with a washed up former '70s glam rocker by the name of Caleb Pink. One of Caleb's former band mates rode a horse off the top of a Holiday Inn, securing the band's place as a minor footnote in rock history.

MARK PORTER: I had the characters of Harry and Lambert Windle, his house mate and friend in mind for some years. I had always imagined I would do something with them, I just didn't know what. Caleb was initially a comedy invention but I had left the stand-up circuit before I got a chance to try him out. Their voices are very different to each other. Some of their characteristics are based around personal experiences and I suppose that there is some of me in Harry, to the extent that I give Harry his opinions and his hang-ups. We are both Olympic standard procrastination experts, so Harry is helping me get over that. In terms of keeping the characters separate and consistent, I have a firm idea of their backgrounds, fears, hopes and quirks before I write for them. Much of that information won't make the cut directly but it helps me keep the behaviour consistent.

MARK PORTER: I'm not sure. I wrote a book that I wanted to read. Dogs is a comedy and there is no getting around that. But I like to think that there are some decent examples in there of a more literary style of writing that I feel I am capable of. It just so happens that my natural voice will throw a punchline in whenever I think I'm in danger of vanishing up my own arse. My biggest influences are Joe R. Lansdale, Carl Hiaasen, Sam Lipsyte, Lee Goldberg and Douglas Adams. I have also started very recently to read Donald Westlake. With a background in stand-up and writing comedy material, I think I know how to time a punchline and how to make it seem natural to the prose. Anyone wanting to be entertained could read this, I am looking to write REAL comedy, not forced sitcom type comedy.

MARK PORTER: One of my earliest high school English teachers complimented me on a fight scene I had written when I was eleven and within a year I had read To Kill A Mockingbird. That book made a life long reader out of me. I wrote poems and lyrics for bands I have played with and also dabbled with shorts. I wrote a novel and aborted another in my twenties and they were brain crushingly bad. Looking back, I can't believe I sent them to anyone. In May 2010, I was in Turkey with Leeanne, my partner. I had just read a novel by a mega selling author. I won't reveal his name but I felt really let down and a bit insulted to be honest. I felt like it was the most formulaic crap I had read and that he wouldn't have found a publisher had he not been able to rely on having already established his name. Leeanne said 'well, why don't you write one then?' I have always talked about it. She gave me a direct challenge to have a go, so I did. I sent the book to one publisher, Drugstore Books who are a very small indie with an ethos of helping new writers and using POD. It was accepted and went through an editorial process. Nine months after that discussion in Turkey, my first novel was published.

MARK PORTER: I write something every day. I tend to write very quickly through the first 50,000 words or so. I slow up down the back stretch and re-drafting takes as much, if not more time than the initial draft. I work out chapter plans and character queue cards were necessary. The plans can change here and there but in a book like Moscow Drive that I am coming into the finishing stages of now, there are so many sub plots and characters that I have to work with a plan. Having that structure helps me to relax and enjoy the process. I'm also a life long insomniac so much of my best work is done when I should be sleeping.

MARK PORTER: I have to cheat and say two. Michael Chabon's The Yiddish Policeman's Union and Joe R. Lansdale's Vanilla Ride. Of course, it depends on mood but all of Joe's Hap and Leonard books would be on the list.

MARK PORTER: A few interviews, some posting on forums, interviewing other writers on my own website, www.markporter.weebly.com and I have some personal appearances coming up, too. It is a huge part of the process. It isn't like the old days, unless you're a celebrity chef or something, publishers have no inclination to promote and you have to do it yourself anyway. The Internet makes it easier, Drugstore Books have been right behind me but you hope you can create some kind of buzz. Without it, whatever you do is worth squat.

MARK PORTER: It makes sense. Anyone who has yet to see that it is the way of future publishing, is probably descended from people who felt the petrol engine could never catch on.

MARK PORTER: Use an editor. Number one, biggest piece of advice. Get some objective eyes in there, people you can trust. But then get a totally independent editor. If you are serious, you will. If not, you run the risk of missing things that mark you out as an amateur. You can sell your books for a pound or a dollar but no-one will repeat buy anything else you do if the first one stinks. Then, all those hurdles negotiated—if you want to shift a few copies you have to learn to promote. No one will read it if they don't know it exists. Accept that some won't like it and have some belief. 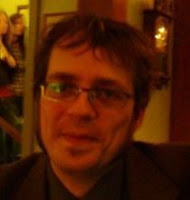 Mark Porter writes, "I am a former stand-up comedian and Probation Officer from Preston in Lancashire.

I have written for as long as I can remember in one form or another (poetry, stories, song lyrics). I have formerly covered boxing for www.15rounds.com in the U.S. and www.britishboxing.net. I have also written various articles for UK based fanszines for the Washington Redskins (Porter's Extra Point column), New York Jets and Oakland Raiders NFL teams.

Dogs Chase Cars is my first novel and the sequel, The Lost Cause Collective is underway. I am currently finishing an unrelated novel, Moscow Drive, which is the first in the Mersey Mojo Chaotic Crime/Mystery series.

I have three children, one dog, two cats, two drum kits and live with my partner, Leeanne in Liverpool."