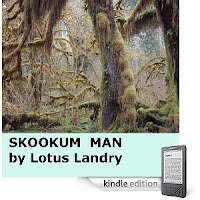 Lotus Landry, author of The Skookum Man, discusses her book, her journey as a writer, and self-publishing on Kindle.

DAVID WISEHART: What can you tell us about The Skookum Man?

LOTUS LANDRY: This is a tale set in the times when animal pelts helped to build America and open up the continent. When the Indians call my character, Robert Lovelace, “Skookum,” they mean that he is powerful and durable. This word is from Chinook jargon and it can mean "first rate." They perceive of him as powerful as he is part of the British fur trade operation. He sparkles in social situations.

There is another side to Robert, however. He demonstrates less than noble behavior with women and he clearly is a clueless greenhorn in wilderness matters. So in his case, “Skookum” can be ironic.

DAVID WISEHART: What research did you do for the book?

LOTUS LANDRY: My research included a search at the local university for period furniture and food and historical accounts. Material on Lieutenant O’Neil’s Olympic Expedition was useful for establishing scenery. Accounts such as Eagle and the Fort (Fort Vancouver) and Soft Gold provided background of the fur trade of the Northwest Coast.

The story in my novel is purely a speculative history and it revolves around characters keeping secrets from one another.

LOTUS LANDRY: The occupations of the characters enter into the stories and these drive some of the aspirations of the characters. In Skookum Man, the female protagonist is really a feminist student of botany with a grandfather who is an Indian Chief and a widower father who is chief executive of a fur-trading enterprise. I also utilize some back story to explain motivations. For instance, the hero of the story has a history of being a slick player of women in London before he arrives in the wilderness.

LOTUS LANDRY: I enjoyed the biography, Herge The Man Who Created Tintin, by Pierre Assouline. This covers the dynamics of how an entertainment franchise evolved. (This is a well footnoted account.) This interests me because I am watching a modern Silicon Valley video game franchise take form.

LOTUS LANDRY: When I consider contemporary books only, I come up with Tim Dorsey’s Atomic Lobster which makes me laugh out loud at every turn of the page, or rather click on "Next Page." This is a picaresque novel set in South Florida with his serial characters, the lowlife criminals Serge and Coleman.

LOTUS LANDRY: My reader can be either female or male. The book has airy references which contribute to a bouncy and tale-like mood with a modern edge. I would expect that the reader is looking for something to take the mind off of concerns of the present electronic age. In this regard the frontier individualism of an 1830’s Western would have an appeal.

LOTUS LANDRY: I did enough writing in the way of business memos to sustain life in a corporate cubicle where I had various technical assignments, including that of "Quality Circles Facilitator" in a rocket factory. These years were followed by a fiction writing course at the nearest university and a writing group. My manuscript was put in a drawer for a few years because of sudden illness in the family. I retrieved it when Kindle emerged. (Who knows how many books emerged from closets when Kindle went live?)

LOTUS LANDRY: I write the thru-line first: the beginning chapter, the major intermediate action, and the ending.

I figure out the back stories of the main characters. I next add supporting characters and weave them, when appropriate, into the thru-line chapters.

I sometimes write patches involving scenes and exhibits such as letters or emails or song lyrics, for insertion later into the story. I use both a yellow legal pad and a word processor. I pay attention to themes which repeat and are ancillary to the action. Motifs are sometimes based on the descriptions of physical surroundings.

LOTUS LANDRY: Anyone with a product that is obtained online would seek to have as many links as possible to the product, including author interviews. My marketing is presently kind of a random walk to find out what works and doesn’t work. I do a very small amount of social networking, I advertise on craigslist, I am in some online genre groups and so on. (I am not on Twitter—don’t own a cellphone—or Facebook, however). I live in a town with a reputation for frugalness (so the real estate page Zillow tells me), so I do not spend money promoting my book other than Web page space (www.matooskie.com). I am a believer that it is important for a writer to offer more than one book.

LOTUS LANDRY: For some first-time indie authors, the time to publication is short when contrasted with traditional methods of trying to hook up with an agent/publisher.

Shelf life is probably longer on Kindle than the traditional book store retention. One reaches a different audience.

Drawbacks? The mechanism of book signings and sending out review copies is better facilitated by traditional publishing.

DAVID WISEHART: What advice would you give to a first-time author thinking of self publishing on Kindle?

LOTUS LANDRY: Do have readers for your hardcopy manuscript at various stages. It is perhaps useful to know the rudiments of HTML for formatting (although one can hire a service for this).

Lotus Landry was born in the Pacific Northwest. She experienced the somber weather and swam in the big river of the novel. She even witnessed Indians spear fishing at Celilo Falls—a way of life that disappeared with the arrival of hydroelectric power.

Discover new writers! Subscribe to the FREE Kindle Author Newsletter.
Posted by kucinx at 10:14 AM