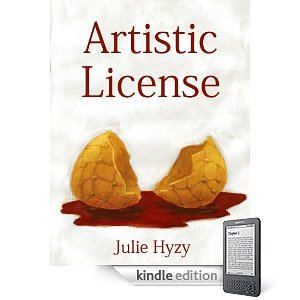 Julie Hyzy, author of Artistic License, discusses her book, her journey as a writer, and self-publishing on Kindle.

DAVID WISEHART: What can you tell us about Artistic License?

JULIE HYZY: Artistic License is a standalone romantic suspense. After five years in a bad marriage, Annie Callaghan establishes a mural painting business, recovers a stolen masterpiece, solves a murder, and finds new love. All in her first trimester.

Artistic License is my first published novel. It debuted in 2004 in hardcover and went on to multiple printings and paperback. What I love about this novel is how we watch Annie change as she recognizes new love and decides to go for it. She grows and learns and I had fun revisiting the wonderful excitement of a new relationship. In the interest of honesty, and now that I have ten novels behind me, I can see that there I made a few rookie errors writing. But the story is still one that remains close to my heart.

JULIE HYZY: Character development is one of my favorite things. I usually spend a lot of time writing up a history of my main characters so I know where they came from, who influences them, and how they tackle problems. Of course, they surprise me from time to time when they refuse to behave the way I want them to. When that happens, I go back to discover the disconnect. You know what? The character is always right.

Occasionally, a character pops into my head, fully formed, with a name and a background and story to tell, ready to go. When that happens, I step back and allow the new character to introduce himself or herself. It's like magic. It's wonderful—this discovery.

JULIE HYZY: At first I thought my ideal reader would be a female, around age thirty-five, but I've found that I have more than a few male readers, and the age range for my stories runs from about age 13 to well over 90. I get a great deal of email from readers and there really isn't one solid demographic.

JULIE HYZY: My first professional sale was a short story to a Star Trek anthology, Strange New Worlds, Volume V, published by Pocket books. I had stories in the next two volumes as well. Writing, for me, is like breathing. I have to do it. As I was bringing out my short stories, I'd started working on my first novel. That turned out to be Artistic License.

As you know, that's a standalone, and I loved the novel process so much, I went on to begin the Alex St. James series, with Deadly Blessings and Deadly Interest. At about that time, I was offered the opportunity to write the White House Chef series for Penguin's Berkley Prime Crime, beginning with State of the Onion. There are now four books in that series (most recent: Buffalo West Wing) with at least two more to come. I also write a second series for Berkley, the Manor House Mysteries. Grace Under Pressure has been out for about a year, and Grace Interrupted comes out in June.

JULIE HYZY: I like to begin with a blank sheet of paper, turned sideways. I write down my protagonist's name in the center along with the names of her family, friends, colleagues, etc. Additionally I decide who has been murdered and why. At that point I try to determine the villain, but that often changes during the course of the writing. I also draw lines and scribble notes to indicate relationships.

I usually come up with a *very* loose outline, putting pieces of the story on Post-it notes and tacking them up on a big board. This is just enough to keep me moving forward. I have the worst memory, so this is extremely important. Things change a great deal during the course of writing, but I like to always know where I've been and what I originally had planned.

JULIE HYZY: I love Ray Bradbury more than any other writer. He's wonderful. Absolutely brilliant. I'm a huge fan of Diana Gabaldon, Sue Grafton and Sara Paretsky. And I gobble up Jonathan Kellerman whenever he brings out something new. Lots of others, but those are some of my favorites.

JULIE HYZY: I have a website, of course. And a personal blog. And a newsletter. All the basic stuff. I hand out bookmarks and occasionally do author talks. What has been great for me has been being a part of MysteryLoversKitchen.com and KillerCharacters.com, two fun blogs with other mystery writers.

JULIE HYZY: Artistic License, Deadly Blessings, and Deadly Interest garnered some nice reviews when they were first published. My character, Alex St. James, developed quite a loyal following. I still hear from readers asking when I'll write more. The books were doing nothing but sitting on my hard drive. Putting them up on Kindle has been the best.

In fact, response has been so incredibly positive that I decided to bring a never-before-published novel out as well. My Playing With Matches (published under pseudonym N.C. Hyzy) was optioned for film some time ago, but I'd never had it published. Just recently, I realized it might do better as a Kindle book than it would in print, so I commissioned a cover and brought it to ebook life. So far, I'm thrilled. My protagonist, Riley Drake has been a big hit with readers.

JULIE HYZY: Have your work professionally edited. It may take a lot of time and effort to get things right, but it is worth it in the long run. Absolutely worth it.

Also—unless you know what you're doing, have your work professionally formatted for Kindle. I had someone format my first three (including Artistic License) but since then I've learned how to format on my own and Playing With Matches was my first attempt. Whew! Turned out great.

Lastly, invest in a great cover. A good cover isn't cheap, but you need to draw readers in and that's your first chance to catch their attention.

Remember that it's more important to upload quality than quantity. You only get one chance to make a great first impression. Make sure you present your best, every step of the way. As I stated in the beginning, I will admit that my first novel, Artistic License, suffers from a few rookie errors, but it's a fun story and it's offered online exactly as it was in hardcover. I believe I've improved as a writer because I write almost every day. That's the biggest, most important piece of advice I can give anyone who has a book yearning to be written... Write Every Day! 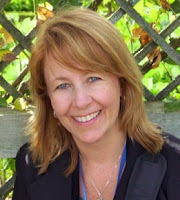 Julie Hyzy has won the Anthony, Barry, Lovey, Derringer, and Phobos Awards for her novels and short fiction. She is the author of the White House Chef Mystery series featuring Ollie Paras, who feeds the First Family and saves the world in her spare time; as well as the Manor House Mystery series, featuring Grace Wheaton, curator of Marshfield Manor in North Carolina—Come for the tour, stay for the murder. All her titles are available on Kindle. Julie also writes under the pseudonym N. C. Hyzy (for her non-cozy stories) and under S. F. Hyzy (for her science fiction).

Discover new writers! Subscribe to the FREE Kindle Author Newsletter.
Posted by kucinx at 2:09 AM