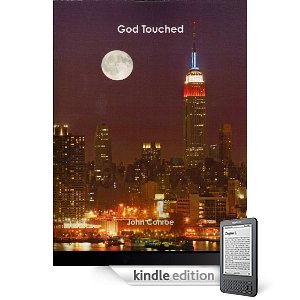 John Conroe, author of God Touched (The Demon Accords), discusses his book series, his journey as a writer, and self-publishing on Kindle.

DAVID WISEHART: What can you tell us about The Demon Accords?

JOHN CONROE: The Demon Accords series is about an agreement between God and the Devil. If Satan's demons can find their way to our reality they can test man any way they want, but God gets to have one human exorcist each generation who wields a holy power of banishment. God has decided to upgrade his soldier. Chris Gordon fights a solitary battle against the minions of Hell, while carrying a back breaking load of anger against God and himself. When he saves Tatiana Demidova from a demonic murder attempt, he finds out that vampires are real, some PTA moms are werewolves and that he too has a soul mate. The series is about finding one's place in life, defending friends and family and never giving in the the darkness that lives in all of us.

JOHN CONROE: This series takes place in the shadows of our contemporary world. I like to blend folklore with science to produce plausible monsters. Quantum physics is so full of inherent potentiality—it makes magic believable. While I take great literary license with particle physics, at the end of the day I want my readers to question just how much we truly know about our world and reality.

JOHN CONROE: My characters spring from people I've met or known throughout my life. Often they are the combination of several real people with a dash of original thrown in. Take Chris's grandfather...Gramps. He's the sum of about ten real world men I've been lucky enough to know.

JOHN CONROE: Readers who like fast paced urban fantasy backed up with some actual research. The majority of feedback follows along the lines of: "It would make a great movie" or "I see it playing like a film in my head as I read."

JOHN CONROE: Mostly as a reader. My mother worked in a library and I read upwards of ten books a week from third grade on. But I've always had an over active imagination and have made up storyline for years. With the arrival of mid-life I decided I should get serious about writing some of them down. I read Bird by Bird by Ann Lamont and On Writing by Steven King, then got down to keyboard and screen. My first book was a good start but nothing I wanted to take public. My second was God Touched, the first of The Demon Accords. I tried pitching it to traditional publishers, but times were tough (2009) and no one was buying. I finally found Lulu.com and Kindle Direct along with Smashwords. Now with three books out, I figure I'll just keep writing a book or two a year till I either run out of stories or stop having fun.

JOHN CONROE: Plot and storyline happens when I'm driving or just before I fall asleep.  Actual keyboard typing happens each morning before work. My stories reveal themselves to me as I write, like digging an object out of a snowbank.

JOHN CONROE: I'm a huge fan of Jim Butcher, Patricia Briggs, John Ringo, Neal Asher, Mercedes Lackey and Anne McCaffrey. But I've read so many that I take inspiration from them all.

JOHN CONROE: I'm a bit jealous of Joel Shephard's Crossover, as well as his book Sasha. Such mastery of third party storytelling is something I can only dream of.

JOHN CONROE: More like, why not? It's easy, reaches millions, pays much better than traditional publishing and each book will remain available for basically ever. Amazon grasped the digital book wave early and has stayed on the crest right along. Instantly updated sales reports, easy access and enormous reach.

JOHN CONROE: I think it's a good idea to create a print copy as well. I've used Lulu.com but there's Createspace and several others. I think most of my sales will always be ebooks, but it's nice to have a physical copy as well and the whole Print on Demand industry is a great way to end up holding your book in your own hands.

John Conroe spent over 25 years in the financial sector, seeing more horror and fiction than he cares to, especially the last two years. Writing about vampires, werewolves and other monsters helps him sleep at night. He lives in upstate New York,with his wife and two daughters, forges knives, and helps promote outdoor education through the Ndakinna Education Center (www.ndcenter.org).