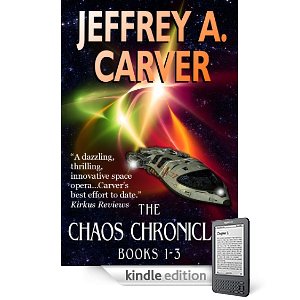 Jeffrey A. Carver, author of The Chaos Chronicles, discusses his book, his journey as a writer, and self-publishing on Kindle.

DAVID WISEHART: What can you tell us about The Chaos Chronicles?

When John Bandicut sets out across the surface of Triton, he's hardly ready for the storm of chaos that's about to blow through his life. The alien quarx that soon inhabits his mind is humanity's first contact with an alien life. The quarx, part of an ancient galactic civilization that manipulates chaos theory to predict catastrophic events, seeks to prevent a cometary collision that could destroy the Earth. But it must have help. If Bandicut chooses to trust the quarx, he must break all the rules—indeed, sacrifice his life as he knows it—to prevent humanity's greatest cataclysm. Leaving friends and lover behind, hurtling across the solar system in a stolen spaceship, Bandicut can only pray that his actions will save the Earth—even if he doesn't live to see it again.

The new chaos of his life continues in Strange Attractors, which lands him in an enormous, enigmatic structure called Shipworld, out at the edge of the galaxy—and again, in The Infinite Sea, where he and some nonhuman friends he picked up in the second book find themselves beneath the surface of an alien sea. They have become, more or less against their wills, a band of world-rescuers. (The story continues in a fourth book, Sunborn, published separately—and in two books yet to be finished.)

I tend to write long, complex stories. It's in my nature. The Chaos Chronicles started as an attempt to break a very long, complex story into smaller sections, each to be written relatively quickly (for me—I'm a slow writer), with the story as a whole stretched out over some years. I didn't quite realize how many years. The three books in this volume took about a year each. (The series was planned at six volumes.) I took some time away to write Eternity's End, set in my Star Rigger Universe—unrelated to this series. That project took way longer than I'd expected. Then I returned to the Chaos series to write the fourth book, Sunborn, and that also took way longer than I'd expected. Six years longer. I'm working on the fifth book now: The Reefs of Time.

Each of these books has an Afterword, written especially for the ebooks, about the process of writing the book.

JEFFREY A. CARVER: The master of world-building was the late Hal Clement (Mission of Gravity).  He and I used to appear together on panels at conventions from time to time, and we noted that we had almost exactly opposite methods of world building. Hal would figure out the gravity and atmosphere and chemistry, and all the other physical parameters, and then work out what kinds of beings might live there. I always start with my characters—human or nonhuman—and learn what kinds of beings they are, then figure out what kind of world they must have. I always sort of wished I could do what Hal did. Hal told me once he wished he could do what I did.

I research as needed. In the case of Triton, I consulted with a scientist at JPL on what it would be like to be on Triton. In Strange Attractors, I was free to make it up; the world was an artificial environment designed to support many kinds of life. In The Infinite Sea, I drew on my own underwater experience as an avid scuba diver for a sense of what it would be like to life and move undersea.

JEFFREY A. CARVER: Almost the same answer: it's a process of discovery. The characters are the most important part of my stories. I learn about them as I write their stories. I'm not one of these people who creates biographies for my characters before I start writing. I couldn't possibly do that. I have to see how they operate under stress, how they relate to others, before their larger stories emerge in my own mind. Most of my characters start with a single image in my mind, or a situation, and everything grows from that tiny nucleus. It's a matter of constantly asking myself questions, and being alert for details that matter. I should acknowledge, too, that the group of writers I meet with regularly help me sometimes in seeing things that are difficult.

JEFFREY A. CARVER: A bright, curious person with a sense of wonder and a desire to explore interesting worlds and peoples with me. Age, somewhere between ten and a hundred and ten. My readers are the best people in the world! (Not that I'm prejudiced or anything.)

JEFFREY A. CARVER: I started showing signs of interest in writing in junior high, but really went at it more seriously in college. I collected rejections for six years, then sold a story to Fiction Magazine. They lasted just long enough to publish it. Then I sold to Galaxy, and continued to collect encouraging rejections from anthology editors. Finally, one of them asked me if I'd be interested in writing a novel—send me an outline, he said—and I jumped at the chance. That was how I wrote my first novel, Seas of Ernathe. After that, I mostly focused on novels, with Star Rigger's Way, The Infinity Link, and others.  I'm working now on my 17th book, which is the fifth in the Chaos series.

One of the best things that happened to me as a writer was joining a good writing group. I'm still part of it, more than 30 years later! And they help me with every piece of fiction I've ever written and published.

JEFFREY A. CARVER: I think I pretty well covered that, except that I'd add: rewrite, rewrite, rewrite for as long as needed. And pay close attention to your editor, because he or she probably has insights that you're missing.

DAVID WISEHART: You wrote a novelization for Battlestar Galactica. How did that process differ from your work on other novels?

JEFFREY A. CARVER: It was great fun. I'd just finished the first draft of Sunborn, after years of struggle. I got to work with the script and the final DVD of the show, and turn a visual production into a novel. The story-creating part of my brain got a little rest, while the part that figured out how best to tell the story got to run free. It was a fast job—they didn't give me much time—and I didn't have too much latitude to expand on the story. But that was okay. The most interesting part of it was discovering scene after scene that worked great on the screen, but didn't quite hold up to the written page—and working out how to change things just enough to enable the story that worked so well onscreen to work as well on the page.

It must be said, too, that it was cool as hell to be involved in the show even on that level. It turned me into a fan of the series.

JEFFREY A. CARVER: Rows and rows of authors on my bookshelves. The classic writers like Heinlein, Bradbury, and Clarke. The younger writers—no longer so young—who followed, like Brin and Ellison and LeGuin. Tiptree, Silverberg, Cordwainer Smith. Tolkien. A blur of writers who followed. Willis. Haldeman. I created a page on my website of recommended reading because every time someone asked me who my favorite writers were, my mind would go white. There are so many!

JEFFREY A. CARVER: The Lord of the Rings.

JEFFREY A. CARVER: The traditional way, right up until ebooks. Two years ago, I released ebooks of the first three Chaos books for free download for a good, long time, in order to promote the new publication of Sunborn. (They were out of print in paper.) Many of my backlist books were released as ebooks through E-reads.

Then, last year, I decided to go indie with a handful of my books. The first three Chaos books. Eternity's End. Then the Chaos omnibus. And I'm working now on a soon-to-be-released two-book omnibus of two of my star rigger novels, Dragons in the Stars and Dragon Rigger.

DAVID WISEHART: With a successful career in traditional publishing, why publish on Kindle under your own imprint?

JEFFREY A. CARVER: For all but the most successful writers, backlist is dying in traditional publishing. Also, all indications were that there was more room for actually earning decent money from my books if I repubbed them myself—not just on Kindle, but also Nook, and several other stores via Smashwords. Those indications were correct. This is proving to be a more profitable model—at least for me, right now, with backlist books.

JEFFREY A. CARVER: I think for new writers, it's still best to try to break in through traditional publishing. Don't underestimate the value of working with an experienced editor, and with a company that knows books and knows how to publish them. That said, what works for one person might not work for another. For some people, going indie clearly offers benefits. But if you do, research what you're doing. Find an editor—pay an editor—to work with you to produce the best writing you can produce. Don’t do it fast; do it right. Care about quality. Care about the reader.

Jeffrey A. Carver writes, "If there's one guiding principle to my writing, it is that I try to tell stories that I would want to read myself—stories that excite, compel, and entertain. As a fiction writer, my favorite themes have been star travel, alien contact, artificial intelligence, and transcendent realities—and the moral, ethical, and spiritual implications of these possibilities. Though I'm known primarily as a hard science fiction writer, the characters are always the most important part of my stories.

"Born in Cleveland in 1949, I lived for most of my growing years in Huron, Ohio, on the shores of Lake Erie, where I was a pretty decent high school wrestler and an annoyingly dedicated student. Upon graduating from Brown University (Providence, R.I.) in 1971 with a degree in English, I stayed in New England, where I live today. In 1974 I earned a Master of Marine Affairs degree (translation: ocean resources management) from the University of Rhode Island—a degree I have never really put to use. At various times I have been a scuba diving instructor, a quahog diver, a UPS sorter, a word-processing consultant, a private pilot, and a stay-at-home dad. I now live with my family in the Boston area, where I divide my shrinking time between home duties and writing (both fiction and freelance technical and web-content writing). I am a member of the Science Fiction and Fantasy Writers of America, and The Authors Guild.

"My interests include science, space travel and astronomy, religion, nature, underwater exploration, and flying. I wish I had more time to spend on them!"

Visit his website, read his blog, and check out his free online writing course.

Discover new writers! Subscribe to the FREE Kindle Author Newsletter.
Posted by kucinx at 4:04 AM