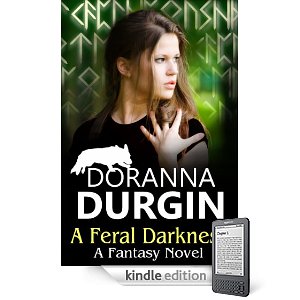 Doranna Durgin, author of A Feral Darkness, discusses her book, her journey as a writer, and self-publishing on Kindle.

DAVID WISEHART: What can you tell us about A Feral Darkness?

DORANNA DURGIN: One of the reasons I love this book is that it came the closest, in execution, to reaching the vision I had in my head when I conceived it. This in spite of—or maybe because of—certain unexpected twists and turns in the writing. I had the choice: avoid issues I hadn't meant to tackle at all, or be true to my character and wade around in unexpected territory to see where I ended up. I chose the latter—I mean, really, it's the only choice to be made—and I've never been sorry. But it was scary at the time!

I also had a lot of fun with the dogs and the grooming store. There's a rather dramatic incident in the book that I took from my own experience, and I've been in those dog grooming shoes...so I guess the whole thing just feels particularly real to me.

It has a blurbie, of course:

Originally a Baen Book: As a child, dog-loving Brenna Fallon naívely invokes an ancient Celtic deity—and leaves an opening for a far more malevolent force. Years later, she depends on her wits, a persistent stranger, and a mysterious stray dog as she struggles to drive back the threat of a modern Black Death. Welded by a desperate sacrifice, woman, man, and dog face the feral darkness together.

DORANNA DURGIN: I let them do that themselves. They usually show up near to fully formed, and then about a third of the way through the book, they say or do something that completely nails them, and I go back through to reinforce that as necessary. I know, I know...it's cliche to say the characters have their own opinions about things. But if you listen carefully enough, that's just the way it is. And If you force them to go against themselves for the sake of the story, it shows.

DORANNA DURGIN: I've had reactions to this book across the board—both in its original mass market version and the new ebook. I've heard from scholars (I was so excited!) who liked the way I approached the Celtic aspects of this book; I've heard from dog lovers who don't generally read fantasy and fantasy readers who aren't necessarily all about dogs. Along with the contemporary fantasy setting, there are suspense and romance elements, but it's all pretty well-blended. It's a lot of fun to see the book cross genre-reading lines.

DORANNA DURGIN: Start young, defy discouragement, carry a knife, pencil and notebook at all times, and write on anything that will hold a mark.

Seriously, I was always writing, and reading even more. I'd bike miles to the library and jam as many books as humanly possible into my backpack at the age when I was still sneaking into the "grown-up books." I wrote my first novel-length work at age 12, and never stopped. (It's amazing how much you can fit into a spiral binder if you get college rule and print really really small!) Once out of college—and relocated to a remote area—I turned to the writing with the earnest intent to sell.  Eventually I moved to a slightly less remote area, and started traveling to conventions, where I learned the ins and outs of the business (pre-Internets, y'know!), put some faces to industry names, and started submitting my work in a more targeted way. I'd write a book, start sending it out, and begin the next. Dun Lady's Jess was the fourth of those; it sold from the slush pile at the second publisher to which I submitted, and went on to win best first SF/F/H of the year.

DORANNA DURGIN: Whatever it needs to be. I generally write in a recliner, with a netbook, listening to a soundtrack or classical. But if I'm out and about and caught with a moment, I write on whatever comes to hand. I do appreciate a good sturdy paper towel! I write 5-7 days a week, and I aim for a page count between 4-7 pages, depending on the circumstances. Only once a year or so will you catch me writing before 11am, though...I am just not a morning writer.

DORANNA DURGIN: Anyone who thrills me in the reading, across genres. That means intense characters, prose that can take me by surprise because sometimes it's just so exactly right, and a book I just can't put down while I'm at it.

DORANNA DURGIN: That's one of those questions I never have an answer for. So many times, as I'm reading, I think, "I wish I could be as effective with [storytelling/description/characterization]." So...y'know. I keep working at it.

DORANNA DURGIN: As best I can? Seriously. I'm not a natural. I have a website (http://doranna.net), and a regular blog called WordPlay (http://doranna.net/wordplay). I do the usual with Twitter (http://twitter.com/dorannadurgin) and Facebook (http://facebook.com/dorannadurgin), with a Facebook Fan page on the side (http://facebook.com/durginbooks), and I've had a newsgroup on SFF Net since '96; I do like the communities one can build in these places, especially since working at home can be rather...isolating. I play around with ads here and there, but am waiting to be convinced.  Recently I started (with friend and fellow author Patricia Ryan) a project called Backlist eBooks (http://backlistebooks.com), as a resource for authors making their reverted and out-of-print works now available in ebook (and for readers who want an easy shopping source across formats, much of which are DRM-free).

Also, my middle dog, ConneryBeagle, is much better at social networking than I am (sadly, this is true), and he has a Twitter account (http://twitter.com/connerybeagle) and a Facebook fan page. (http://facebook.com/ConneryBeagle)

DAVID WISEHART: You've been traditionally published. Why self-publish on Kindle?

It's really a no-brainer. I have books out-of-print; I'd like them available, and I'd really like them available as ebooks. I'd also like to maintain control over them. And I'm already required to do a ton of marketing for my publisher books, so that's nothing new (although the exact logistics are a bit different). I also have books I'd like to write that don't sell at major houses because they don't fit into neat little genre/trend slots. I've always liked to color outside the lines, and self e-publishing allows me to do just that. Not that there's not a huge learning curve when it comes to logistics! I have to laugh when I think how little I knew about all this less than a year ago...

DORANNA DURGIN: To understand your goals. Would you like this to be a professional endeavor? Then treat it as such, and give it the respect it deserves. Learn your craft, and learn the business aspect of the craft, and listen to those with experience even if they tell you things you don't like hearing. Cultivate persistence—in marketing, in writing the next book, in building who you are as a writer so your readers know what to expect. And know the reasons you're doing it. If you can say, "I would be writing these books anyway, even if I had no opportunity to publish them," then you're in the right place.

Doranna Durgin's quirkiness of spirit has led to an eclectic publishing journey, spanning genres over 30 novels to include mystery, SF/F, action-romance, paranormal, franchise, and a slew of essays and short stories; she also builds web sites and co-manages the Backlist eBooks project.

Beyond that, mostly she still prefers to hang around outside her New Mexico mountain home with the animals, riding dressage on her Lipizzan and training for performance sports with the dogs. She doesn't believe so much in mastering the beast within, but in channeling its power. For good or bad has yet to be decided...