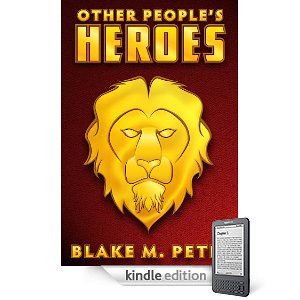 Blake M. Petit, author of Other People's Heroes, discusses his book, his journey as a writer, and self-publishing on Kindle.

DAVID WISEHART: What can you tell us about Other People's Heroes?

BLAKE M. PETIT: Other People's Heroes is a superhero adventure about a reporter who has grown up wanting to be one of his city's champions. When he discovers a power of his own he thinks he has his shot, but instead, he learns that the Capes of Siegel City aren't what he thought they were.

BLAKE M. PETIT: Major characters, for me, are often dictated by the plot, then developed in relation to it. I think of the sort of person that fills the role I need for the story, and go from there. Of course, sometimes a character will surprise me (as happened with the character Sheila Reynolds in OPH) and I wind up course-correcting the plot to follow where they want to go.

BLAKE M. PETIT: For OPH, I'm really looking at two audiences. First off, this is a love letter to superheroes, and I think anyone who likes old-school comics will enjoy the book. It's also a comedy/adventure, the kind of tale where funny characters react to a serious situation in an amusing way. It's the Ghostbusters/Back to the Future/Shaun of the Dead effect I'm going for.

BLAKE M. PETIT: That's a tough one, as I don't think it's really over yet... and probably never will be. I had an overactive imagination when I was a kid. I had a couple of great teachers who showed me how to turn that into an asset instead of a liability. Ever since then, I've been learning the craft, how to shape a story, and what kinds of stories I really want to tell. I think my writer's journey is as much about learning what stories are already in me as it is about anything else.

BLAKE M. PETIT: It changes from project to project, but usually I have to have a strong set-up and a clear ending in mind. From there, I just write one word after another. The ending may (and often does) change as I go through the story, but without an end point in mind, I lose my way and get bored. If I know where I'm going, I can find my way to the end. Then, once I'm done with the first draft, the REAL work begins...

BLAKE M. PETIT: Writers who write ABOUT Story are the ones that speak to me the most—Neil Gaiman, William Goldman, Kurt Busiek, Terry Pratchett and Stephen King in particular. I also have an appreciation for the classics, which helps, as I'm an English teacher in my day job. I continue to be amazed every time I read something by Mark Twain.

BLAKE M. PETIT: Ender's Game by Orson Scott Card. Besides just being a fantastic book, it's a nearly flawless example of character development and world-building. Anyone who wants to write speculative fiction of any kind should study the hell out of that book.

BLAKE M. PETIT: That's still a work in progress. Last year, I recorded the entire book and released it a chapter at a time as a free podcast novel. Now that it's in ebook form, I'm hustling up coverage and interviews from any blogger, reviewer, and podcaster who'll have me, in addition to putting together a podcast promo and using Social Media to spread the word as much as possible.

BLAKE M. PETIT: Superhero novels have an audience, but it's not a huge one. Plus, this book is a revised and expanded edition of a paperback that came out some years ago. Once I got the rights to the book back from the original publisher, I thought that this would be a better, faster way to get it out there in the public eye than spending months or potentially years looking for a new print publisher. The ebook space is proving to be really effective at getting stories to people who otherwise may never have seen them. I've got one more book from that old publisher that I'm going to release the same way once I finish revisions. After that, I'm going to take a couple of new projects and hunt for traditional homes, but I think the ebook format is going to be vital to any author trying to make a name for himself in the future.

BLAKE M. PETIT: It's old advice, but it's so, SO true: get someone you trust (NOT your mother) to edit your book. Get a few people, in fact. Get people who either don't care enough to lie to you about how awesome you are or care TOO much to lie about how awesome you are, and then revise the heck out of the book before you send it out there. Then, be all over the Internet and shout the fact that you've got a book at anybody who'll listen. 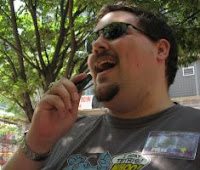 Blake M. Petit is a writer, columnist, reviewer, podcaster, actor, director, and teacher from Ama, Louisiana. He is the author of the novels Other People’s Heroes and The Beginner (coming soon as an ebook), as well as the short story collection A Long November and Other Tales of Christmas. His weekly comic book column, Everything But Imaginary, has appeared Wednesdays at CXPulp.com since 2003. In January of 2007 he joined with his longtime friend Chase Bouzigard to host the weekly 2 in 1 Showcase comic book podcast, appearing every weekend at CXPulp. Blake is a member of the board of directors of the Thibodaux Playhouse theatre company in Thibodaux Louisiana, where his original stage play The 3-D Radio Show was produced in 2004. In a former life as a newspaper editor, his weekly Think About It column won the Louisiana Press Association Award for best column in 2001. In his free time, he teaches high school English, which at the moment pays better than the rest of his more impressive-sounding endeavors put together.

Discover new writers! Subscribe to the FREE Kindle Author Newsletter.
Posted by kucinx at 1:54 AM