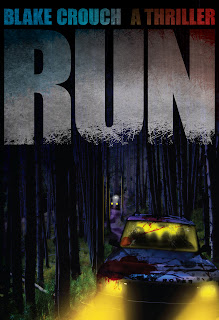 DAVID WISEHART: What can you tell us about Run?

BLAKE CROUCH: I think the product description says it best:

For fans of Stephen King, Dean Koontz, and Thomas Harris, picture this: a landscape of American genocide...

5 DAYS AGO
A rash of bizarre murders swept the country...
Senseless. Brutal. Seemingly unconnected.
A cop walked into a nursing home and unloaded his weapons on elderly and staff alike.
A mass of school shootings.
Prison riots of unprecedented brutality.
Mind-boggling acts of violence in every state.

4 DAYS AGO
The murders increased ten-fold...

3 DAYS AGO
The President addressed the nation and begged for calm and peace...

2 DAYS AGO
The killers began to mobilize...

YESTERDAY
All the power went out...

TONIGHT
They're reading the names of those to be killed on the Emergency Broadcast System. You are listening over the battery-powered radio on your kitchen table, and they've just read yours.

Your name is Jack Colclough. You have a wife, a daughter, and a young son. You live in Albuquerque, New Mexico. People are coming to your house to kill you and your family. You don't know why, but you don't have time to think about that any more.

BLAKE CROUCH: I try to always keep my characters uncomfortable. Maybe they get a moment here and there to breathe, but there’s always something coming around the corner. Also I want people to love this family in Run, because the more they love them, the more they’ll go along on this journey.

BLAKE CROUCH: Before I start a book, I spend a lot of time writing about my characters, trying to understand where they’re coming from, to get a sense of all the things that have happened in their lives to bring them to the moment where I incorporate them into my story. If you think of your characters as having lives before they met you, that’s the start to creating rich and imperfect characters.

BLAKE CROUCH: Great question. The Silence of the Lambs. I still can’t believe how good that book is.

BLAKE CROUCH: Well, for Run I called on the good people who helped us promote Draculas, and they’ve given me a tremendous lift. I’m greatly indebted to them.

BLAKE CROUCH: Because it gives the author total freedom over their work.

BLAKE CROUCH: Read a lot. Write a lot. Write the best book you can, and get people who aren’t related to you to read it and give you their honest opinion. Hire a professional to design a beautiful cover and to format your book. Get active on the web and make your presence known. Cross your fingers, because it’s still a huge crapshoot.

Blake Crouch is the author of Desert Places, Locked Doors, and Abandon, which was an IndieBound Notable Selection last summer, all published by St. Martin’s Press. His newest thriller, Snowbound, also from St. Martin’s, was released in 2010. His short fiction has appeared in Ellery Queen’s Mystery Magazine, Alfred Hitchcock’s Mystery Magazine, Thriller 2, and other anthologies, including the new Shivers VI anthology from Cemetery Dance. In 2009, he co-wrote Serial with J.A. Konrath, which has been downloaded over 350,000 times and topped the Kindle bestseller list for 4 weeks. That story and Abandon have also been optioned for film. Blake lives in Durango, Colorado.