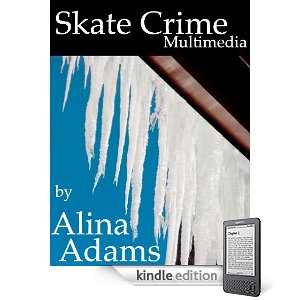 Alina Adams, author of Skate Crime: Multimedia Edition, discusses her enhanced book, her journey as a writer, and self-publishing on Kindle.

DAVID WISEHART: What can you tell us about Skate Crime: Multimedia Edition?

ALINA ADAMS: Skate Crime: Multimedia is an experiment in 21st century storytelling. It's not exactly a book, it's not exactly a movie. It's a hybrid—or what's being called an enhanced book. My Figure Skating Mystery, Skate Crime, was published by Berkley Prime Crime a few years ago. An e-book version exists featuring the complete text of that novel. Skate Crime: Multimedia is a novella-length excerpt from that book, but with real life, professional quality skating videos embedded right in it as part of the story!

DAVID WISEHART: How was the experience of enhancing your book?

ALINA ADAMS: Terrifying. The entire concept is so new, I felt like I was completely on my own. Yes, S&S has their Vooks, and a few other houses have released enhanced books, as well. But, the majority of them are non-fiction. When it came to enhanced novels, there was very little out there for me to use as a guideline. I had to, basically, figure it out on my own and make it up as I went along. Obviously, this is only the beginning of enhanced books. My greatest interest is in enhancing fiction in a way that actually contributes to the story. I don't want to put in videos just for the sake of saying I put in videos. I want them to add to the overall reading experience.

ALINA ADAMS: I love all readers. ;) But, if I had to pick one quality, I'd say an early adaptor, someone who is excited to check out what the newest thing might be, not just technically but creatively. And one who is willing to give me constructive criticism so I can continue developing and improving what I, in turn, offer them!

ALINA ADAMS: In 1993, I got a call from an editor at Avon who’d read a contemporary women’s fiction novel I submitted (why I thought I knew enough to write women’s fiction at the ripe old age of 23, I’ll never know). She said that while she thought it showed promise, they tended to publish new writers in historical or Regency romance. Would I care to try my hand at a Regency romance? “Of course!” I said. I hung up the phone and asked the air, “What the heck is a Regency romance?” I went to the library, read ten Regencies in one sitting, and proceeded to write three sample chapters and an outline of a Regency romance. A few weeks later, I got a call from the same editor who told me she loved it and would like to see the complete manuscript on her desk at the end of the week. I told her, “It’s… not… polished, yet.” Which sounded a lot better than “It’s… not… written, yet.” I spent the next few weeks pounding it out, and that first Regency, The Fictitious Marquis, ended up being published by Avon in 1994.

Years later, a friend of mine in the publishing business told me, "You know, it's not supposed to happen like that." But, that kind of summarizes my entire career.

In December of 2001, I wrote an unauthorized biography of figure skater Sarah Hughes at the request of an editor at Penguin. In February of 2002, Sarah Hughes came out of nowhere to win the Olympics. It's not supposed to happen like that.

In April of 2006, Oakdale Confidential, a tie-in book I wrote in conjunction with the 50th Anniversary of the soap opera, As The World Turns, debuted at #3 on the New York Times best-seller list. No soap opera book had ever hit the list that high. It's not supposed to happen like that.

Frankly, I can't wait to find out what happens next!

ALINA ADAMS: I write. I write five days a week starting at 9:30 AM (after I drop the last of my three kids off at school) until 2:30 PM (when it's time to pick the first of my three kids up from school). I write when I don't feel like it, and I write when I have nothing to say. The depressing part is, the scenes that I wrote when it felt like I was brilliant, inspired, can't go wrong! and the scenes that I wrote when every word felt like pulling teeth and, upon rereading, the whole scene made no sense whatsoever... sound exactly the same once the project is finished.

ALINA ADAMS: I have wanted to be Sidney Sheldon since I read my first book of his at the age of 13.

ALINA ADAMS: Exodus by Leon Uris. It's a pot-boiler, it's partisan, it's over-written. It's awesome.

ALINA ADAMS: I will blog for anyone, anytime, on any subject. There is no topic on which I do not have an opinion. Because of my background working in soaps, I do a soap opera blog at: http://soapopera451.com/ where I promote my work. Having worked at ABC Sports, ESPN and TNT, I also reach out to the figure skating community, the magazines, the clubs and the rinks.

ALINA ADAMS: It's the new frontier! I've published in paperback, I've published in hardcover. I want to try something new. As a writer for both print and television, enhanced books are just very, very exciting to me. And Kindle is the best way to do it!

ALINA ADAMS: Try to offer something that differentiates you from the pack. Whether its subject matter, technology, your own personal story, or something no one else has thought of before, the name of the game is making your voice heard above the din. Be original. Be bold. Take risks. Prepare to fail. And to try again.

Discover new writers! Subscribe to the FREE Kindle Author Newsletter.
Posted by kucinx at 12:21 AM