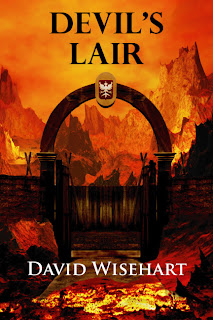 A medieval knight leads a quest through Hell to recover the Holy Grail from the Devil...

Devil's Lair
by David Wisehart
[CHAPTER 1]
[CHAPTER 2]
[CHAPTER 3]
CHAPTER 4
Nadja sat in the two-wheeled cart as it rattled on the road, heading south through the low mountains of Campania, passing stands of holm oaks and service trees.

Next to her, Marco da Roma lay half-dead. He was longer than the little cart. His legs, bent at the knee, dangled over the back. Nadja held his cold, rough hands and prayed over him, whispering the Ave Maria. The words were in Latin, God’s language. She did not know what the words meant exactly, but she had heard them often enough, and had taught herself to say them. They were a comfort to her now.

She gazed down at Marco’s scarred, angular face. He had fallen forward on the battlefield, had been robbed of his clothes and armor, and had lain a day or more with his naked back and half his face exposed. Now, with the right side of his face sunburned, he looked like two men sewn together, one pale and the other red. The bandage, wrapped about his head like a linen casque, was stained with blood above his right ear. His head jounced and swayed as the wheels of the tumbrel bucked along the narrow dirt road, but Marco remained unconscious, his eyelids closed. He appeared to sleep, as if drowsed by a dwale, like in the children’s story of the knight and the princess, only now it was the knight who was ensorcelled by a spell, and Nadja was no princess. Her kiss would not save him, though if it could she would deny him nothing. Nadja knew his face better than her own, for she had seen it often in her falling dreams. She had sketched his features from memory, in charcoal on paper, but had done scant justice to his savage beauty.

As the sun crested the doddered trees, Nadja began to fret. Marco’s burns would soon worsen. He needed shade. She had an idea. If she could get the other blanket out from under him, it might serve as a canopy. Lifting his left arm to free a fold of the blanket, she discovered a stab wound in Marco’s side, just below his armpit. Odd. The site of the wound, shielded by his upper arm, could not have been an easy target. If the blade had plunged deep it would surely have pierced his heart. Somehow, it had not. Another miracle. She thanked God and repeated her prayers, then held up the blanket to shadow the face of the fallen man.

The road was narrow and treacherous. In some places it ran to the edge of the drop, where one good bounce might send the tumbrel down the mountainside. Nadja preferred to walk, as she had done for most of the journey, trusting in her own two feet, but someone needed to watch over the wounded man. God, she trusted, would watch over her.

William and Giovanni ambled together ahead of the sumpter. The friar thumped his walking stick at a steady gait, poking at the road. A dotted line trailed behind him. Giovanni led the donkey, holding the reins in one hand, a long switch of hazel in the other. He glanced back to see what Nadja was doing with the blanket, then addressed the friar. “He’s too young, Father.”

“And strong,” the friar said, as if in agreement.

William fell silent for a dozen paces. The walking stick thumped along, punishing the earth. “It doesn’t matter,” he said. “He’s the man in the picture.”

“That picture could have been a dozen soldiers on that field.”

“It is a picture of one man,” said William, “and one man is what we found.”

Giovanni did not seem convinced. “I saw a thousand. I couldn’t tell the Neapolitans from the Hungarians. Some had lost their looks, others their heads. I saw more bodies than faces. I left Florence to get away from the dead, and you walk me through a sea of corpses. For what?”

Nadja spoke up. “This is the man. If he does not look like the picture, it is the fault of my hand, not of his face.”

“And he has the mark,” William added.

Giovanni shook his head in scorn. “Mark of a heathen. No Christian would brand his own flesh.”

“The Templars did,” William said.

“I’ve read many things about the Templars, but I have never read that.”

“Then you have not read their secret books.”

“If you have read them, they are poor secrets indeed.”

“Their meaning was cloaked in a code,” said William. “I doubt you could have read them. My eyes are not what they once were, but they are better eyes than most.”

Nadja wasn’t sure what a code was. It seemed to be a kind of spell that made literate men illiterate. Perhaps a code was like a foreign tongue, like Tuscan or Latin, which made people babble until God taught you to hear the words in a new way, and then they made more sense.

“Code or no code,” Giovanni said, “tattoos are banned by the Church.”

Even Nadja knew that, and she had read no books at all. Her mother had once told her that the tribes of Germania practiced such devilry before the birth of Christ. Nadja had also heard of merchants who traveled to Christendom from India, Tartary, and Cathay with pagan images needled on their skin, but she had never actually seen a tattoo until her revelation.

“Tattoos were the least of their sins,” said William. “The Templars were charged with heresy.”

“On the subject of heresy,” Giovanni retorted, “I defer to your expertise.”

The donkey began to lag. Giovanni tugged at the reins, and when the animal failed to heed the hint, the poet raised his long switch and whipped the sumpter on the rear. The donkey brayed his rebuttal and resumed his former pace.

“He can’t be the man you’re looking for,” Giovanni said. “The Templars were burned at the stake more than forty years ago.”

“You weren’t even alive then,” William pointed out.

“My father was in Paris on business, staying near the church of Saint-Jacques-la-Boucherie. He saw it with his own eyes. He said that for three days the sky was as black as midnight with the smoke from the heretics.”

“Yes. More than a hundred were burned. But some escaped.”

“If any survived, they would be your age.”

William sighed. “Perhaps the brotherhood lives on,” he suggested. “Somewhere. In secret.”

“Yes, and perhaps this is the Garden of Eden, and perhaps the sun is rising in the west, and perhaps my donkey here is Balaam’s ass.” He turned to the donkey and said, “Are you Balaam’s ass?” He answered himself in a funny donkey voice: “‘Why yes, pleased to meet you, though I wish you wouldn’t beat me with a stick. Oh, look, is that a Templar in my cart?’”

The friar was not amused. “The man you mock is a Poor Knight of the Temple, the last of a sacred brotherhood, defenders of the Holy Grail. He is the one. He will save us all.” William’s voice was stern, putting an end to the argument.

I hope he’s right, thought Nadja. If not, it would be her fault. She had brought them here. Her visions had led her to William of Ockham, to Giovanni Boccaccio, to Marco da Roma. Her visions now spurred them all south to the infernal gate in search of the Holy Grail, which the Devil had stolen from the world, though she did not yet understand how this wounded man could save them. Her visions were sporadic. She knew the others shared her doubts, but what worried her most was her secret fear: that it was not God who guided her dreams, but something else inside her, something evil.

She heard a soft grunt, and glanced down at the knight. Marco’s eyelids remained closed, but the eyes flittered beneath their veils. Something was happening. Something had changed.

#
Marco da Roma walked in darkness. A cold mist enveloped him. Through the mist a red light beaconed. As he approached it he perceived more of his surroundings: he moved across a field of ice, a vast floe bathed incarnadine by the blood-red light before him. Trapped in the ice were hundreds of human faces staring up, immobile except for their eyes, which tracked his movements from underfoot.

Walking on, Marco saw the red light divide into two glowing orbs that grew larger as he approached. They became a pair of shimmering eyes, chatoyant as the eyes of a cat. They looked down at him from an immense height.

He stopped, transfixed, shivering in the dark. The flames of those eyes gave no warmth.

“Who are you?” He recognized his own voice, but felt no vibrance in his throat, no breath upon his lips.

You know who I am.

I am the darkness.

Better than you know yourself.

Do you want to die?

Then open your eyes.

Marco opened his eyes. He came to himself in a storm of light. His skin was on fire. A pulse pounded in his ears like the stampede of a thousand chargers. A silhouette obscured the sky: the outline of a woman, her face in shadow, her hair tinged with gold.

But the darkness reclaimed him, and the world fell away.

Join us each week for #SampleSunday.
Posted by kucinx at 11:27 PM