New Kindle Ebook: "Endgame and Other Stories" by David Wisehart 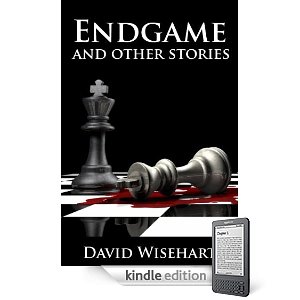 I've published on Kindle my first short story collection, Endgame and Other Stories....

Four stories of mystery and wonder, plus a bonus excerpt from a Hollywood detective novel.

"The Man Who Saved Gonesse"
In 1783 the world's first hydrogen balloon rises above the Paris skyline and disappears into the countryside. The balloon lands in the village of Gonesse, terrifies the local peasants, and inspires a singular act of courage and redemption.
(6,800 words)

"Ghost of the Living"
When astronaut Gavin Megano steps out of his starship and onto an alien planet, he has already been dead 80,000 years. His DNA and memories were sent into outer space, and he is now reborn. As he explores his new world, he finds adventure, danger, and the one thing he never expected...himself.
(3,700 words)

"Endgame"
A woman meets a man at a cafe. They strike up a conversation. But instead of telling stories about themselves, they decide to tell stories about each other. After a friendly game of chess the woman learns that some stories are more true, and more terrifying, than she could have possibly imagined.
(4,100 words)

"'Crimson Lake' is a well-crafted, clever, fast-paced mystery and it is short enough that you can read it in one sitting. I would love to read more stories like that and I hope the author writes a few sequences. I could just picture the famous Leonardo da Vinci, hunting criminals in the medieval and Renaissance Italy, a country ripe with intrigues, murders, violence as well as full of magnificent art. Highly recommended."
—Christa Polkinhorn, author of Love of a Stonemason